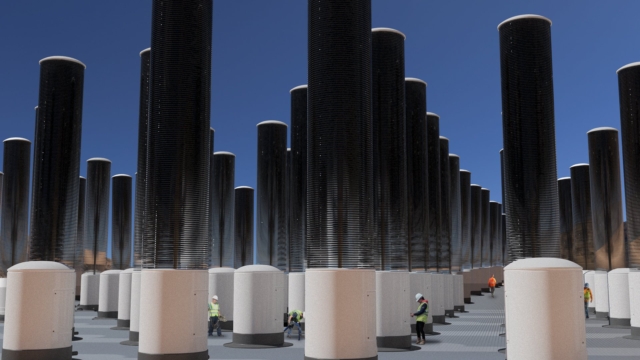 A major trial of mechanical trees that can suck CO2 from the air 1000 times faster than real trees is set for this year. Should the trial be a success, the team behind the “fake trees” say there could be one billion of the devices worldwide within two decades.

The MechanicalTree is based on proprietary technology developed by Professor Klaus Lackner, a pioneer in the field of direct air capture. In 1999, the Professor made the landmark statement that limiting carbon emissions was not enough to avert catastrophic climate change. He concluded that CO2 needed to be removed from the atmosphere too. As a result, his subsequent work at Arizona State University is to develop technology to this end.

The prototype tree is a “concertina” column with 150 horizontal, circular discs coated with chemicals. These catch CO2 when the wind blows through them. The “mechanical trees” will allow the captured gas to be sequestered or sold for reuse in a variety of applications. These include synthetic fuels, or in food, beverage and agriculture industries. Unlike other carbon-capture technologies, the MechanicalTree can remove CO2 from the atmosphere without needing to draw air through the system using energy-intensive devices. Instead, the technology efficiently captures carbon as wind blows air through the system from any direction. If deployed at scale, the technology could lead to significant reductions in the levels of CO2 in the atmosphere. This in turn would help to combat global warming.

Lackner is confident that one billion mechanical trees can be operational internationally by 2042. “Our goal is to make these mechanical trees in factories and make them in their hundreds of thousands. I can put at least tens of thousands on a square kilometre and ultimately I see these things on the scale of a car,” he said in an interview with inews. “If you add up how much carbon we need to get back from the atmosphere we simply don’t have enough land to grow the trees.”