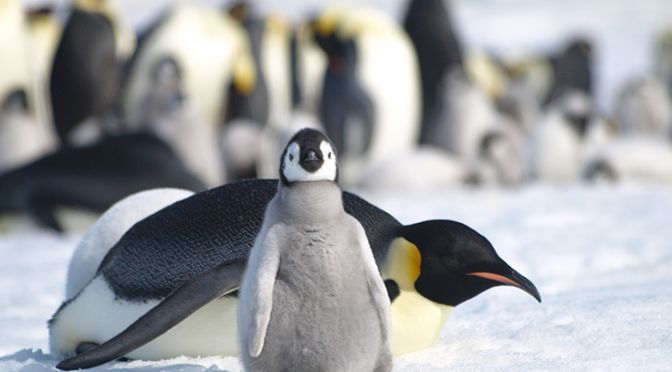 It was a thrilling moment for wildlife researchers and nature lovers alike: 11 new colonies of emperor penguins were found dotting the coastline of Antarctica, taking the known colonies to 61 in total.

‘The [new colonies] are an exciting discovery,’ said Peter Fretwell, at the British Antarctic Survey (BAS), who led the research. ‘Whilst this is good news, the colonies are small and so only take the overall population count up to just over half a million penguins.’

The BAS relied on new technology to find the colonies – the EU’s Sentinel-2 satellite, which has higher resolution and a more efficient search mechanism than the satellite the BAS used previously.

Sentinel-2 used infrared imagery to spot ‘the distinctive red-brown guano patches the birds leave on the ice,’ as Damian Carrington wrote in The Guardian.

It helped that scientists had an idea of where to look.

‘Emperor penguins were expected to be present at fairly regular intervals around the coast of Antarctica, so the search was targeted in areas where none were known. “In every gap where we thought there might be a colony, we found one,” said Fretwell.’

But there were a few surprises, with one colony sitting 112 miles off the coast. ‘Many of the penguin scientists we have talked to were disbelieving, as normally you expect them to be at the coast,’ Fretwell said.

Emperor penguins don’t breed on the land itself, preferring instead something called ‘fast ice’. This is seasonal ice that forms just off the continent or even an iceberg, and provides just the right conditions for laying an egg and raising the chick for its first year.

‘But this seasonal ice needs to be long-lived,’ wrote Jonathan Amos in the BBC, ‘to stay intact for at least eight or nine months to be useful.

‘If it forms too late or breaks up too early, the young birds will be forced into the sea before they’re ready, before they’ve lost their down and grown water-proof feathers.

‘Likewise for the adults. They undergo a dramatic moult in the summer months of January and February. They too risk drowning if the fast ice melts away and they don’t have the right plumage to resume swimming.’

And these very real threats to the emperor penguins’ habitat are becoming more likely with the climate crisis.

Philip Trathan, also at BAS, said: ‘The new breeding sites are all in locations where recent model projections suggest emperor penguins will decline. These birds are therefore probably the canaries in the coalmine – we need to watch these sites carefully as climate change will affect this region.’

‘Previous studies have estimated that 90% of known colonies will be lost by the end of the century if no further action is taken to cut the greenhouse gas emissions that drive global heating. Even in the best case scenario, where deep and fast cuts to carbon emissions limit the rise in global temperature to 1.5C, the population of emperor penguins is projected to fall by 30%.’

We can all do our part to reduce our carbon emissions – by switching to a plant-based diet, moving to a renewable energy provider and by voting for a green recovery.