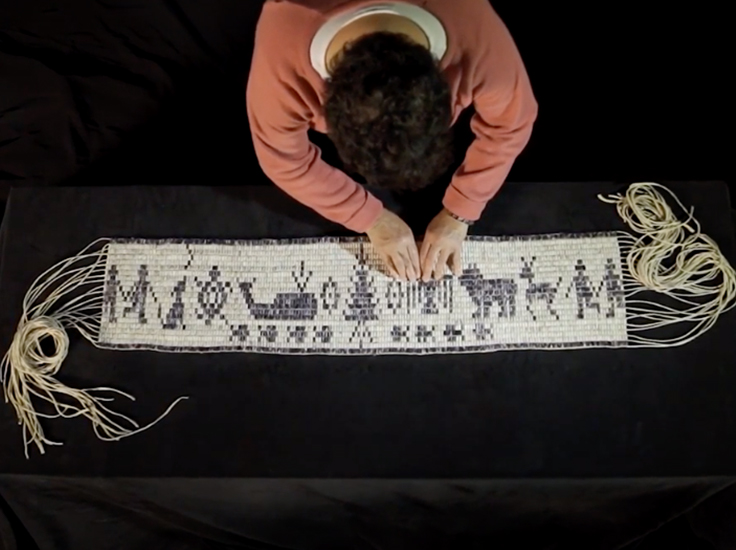 ‘We, the Wampanoag, welcomed you, the white man, with open arms, little knowing that it was the beginning of the end.’

So ran the 1970 speech written by Aquinnah Wampanoag elder, Frank Wamsutta James, on the 350th anniversary of the Mayflower’s arrival at Plymouth. Event organisers objected and wrote a completely different – and highly sanitised – speech for him to deliver. He refused, and withdrew from the event.

It’s a very different story this year when, for the first time ever, the perspective of the Wampanoag people – the indigenous Americans with whom the Pilgrims first made contact – is included in the Mayflower 400 celebrations.

And, as Paula Peters, a member of Mashpee Wampanoag tribe and activist, educator and co-founder of creative agency Smoke Sygnals, says, it’s a long overdue acknowledgement of these marginalised narratives.

Recently, Peters wrote an introduction for the latest edition of William Bradford’s journal – the quintessential work that scholars turn to research colonial history in this area – and in that, she looks at the accounts of the colonists themselves and their writings on what actually occurred.

‘This is not a rewriting of history – there is nothing revisionist about it,’ she says. ‘I’m just pulling it out of the margins and talking about it in terms of how it impacted Wampanoag people.’

To those who point to the absence of a written language used by Wampanoag to record their own accounts of the events of the 17th century – as if this somehow renders accounts unreliable or negligible – Peters is scathing.

‘We have very strong oral traditions – as have many cultures in history – and besides, I don’t think that my ancestors needed to write down how they felt about being colonised or oppressed or stolen into slavery, or having been infected with disease,’ she says. ‘No one needs to write down how that feels; even today, we know what a pandemic feels like and how frightening and frustrating it is to feel vulnerable, and to not to be able to cure ourselves.’

And indeed, oral history was not the only way by which knowledge of events was transmitted between people and generations. The weaving of Wampum belts – intricate belts made of whelk and quahog shells – told tales as eloquently as the Bayeux Tapestry – and a belt of this kind forms some of the focus of the 400th anniversary.

‘At the end of King Philip’s War, which took place about fifty years after the colonists arrived, a Wampum belt was taken from Metacom, known to the settlers as King Phillip,’ explains Peters. ‘Essentially, it contained our history and, at approximately nine feet long and nine inches wide, would have taken many years to make, with each maker adding their own story. It would have been extremely valuable in its own right – wampum was like currency – but even more precious, because it tells our story.’

The belt was taken as a spoil of war and sent to King Charles, but never arrived – and attempts, over the years, to locate it have proved fruitless. As part of Mayflower 400, a new belt has been created and is on display in the UK: it’s not an attempt to replicate the lost belt, but has helped to restore the tradition of making, by engaging the Wampanoag community to talk about the stories they wanted included and to engage artisans to create beads. In short, says Peters, it has brought the community together.

It has also reignited a spark of hope. ‘Having the belt on display in the UK does the one thing that our search efforts have not been able to do,’ says Peters. ‘It shows what it is that we are looking for. With the help of this visual clue, we are hopeful that the belt, or even parts of it, will be restored. Maybe it’s a long shot but … if you don’t dream, then what do you have?’

Looking at the circumstances surrounding the arrival of the Mayflower, it seems astonishing that for so long, we have blithely accepted the story of the kind Pilgrims, the friendly Indians, the successful harvest and the joyous free-for-all of the first Thanksgiving. Yet, as Peters points out, reframing the narrative to include the perspectives of her ancestors does not entirely turn the story on its head, in the way often feared by conservative historians.

‘There was co-operation between the two groups, she says. ‘It’s not a myth that a treaty was signed – and it’s probably not untrue that, in many ways, they had a mutually beneficial relationship. However, it’s really important to tell that story in context – for example, the fact that the Wampanoag had suffered many losses during The Great Dying (the 1616-1619 plague), so their vulnerability to neighbouring tribes would have made them more receptive to the idea of an alliance with the English arrivals. In addition, the presence of women and children on the Mayflower would have been different from anything they’d seen in the past: they would have been regarded as far less of a threat – as a community rather than a band of explorers, pirates or fishermen.’

Recognising how these strands of need and circumstance all came together at a single moment in history is crucial to our understanding, says Peters – to understanding that ‘it was not just that “kumbaya moment” that everyone seems to want to focus on.’

‘People are comfortable with that story angle,’ she continues, ‘but if we ask ourselves: how is it possible that the Pilgrims were able to land and speak English with an Indigenous person, Squanto? Even as a child, my teachers would always just dismiss such questions with “oh, he must have met some traders at some point,” when the reality is that he was kidnapped, enslaved and kept away from his territory for years. Squanto is seen as this ambassador, a conduit between the colonists and Wampanoag; he is a highly romanticised figure when actually, his life was tragic.’

The nature of relations between parties has also been romanticised. ‘Hindsight is a wonderful thing, but you really don’t need a crystal ball to know that Massasoit (the Wampanoag ruler) would not have realised that he was agreeing to compromise the sovereignty of his people. Despite the ravages of the plague, the Wampanoag were still the majority: there were thousands of them, compared to 102 Mayflower passengers (and around thirty crew) – a number that was more than halved over the course of that first winter. They would not have appeared to be a threat: he would have seen himself as a king who giving aid to desperate survivors. He could not have known that their intention was to convert the Wampanoag to Christianity, to impose English law and to prevent them from living their lives in the way to which they were accustomed – ironically, the very things that the English were attempting to flee.’

Naturally, there are bound to be anti-revisionists who object to the addition of the Wampanoag narrative to the Mayflower story. ‘You can’t change history,’ they’ll bleat – or ‘well it depends on whose side you’re on’.

What’s incredibly refreshing about the approach of Peters, and of all of those involved in the Mayflower 400 efforts, is that they’re not attempting to change history: they’re simply focusing on dispelling myth and on giving voice to those parts of history which have been glossed over due to the inconvenience of their truths.

They are not taking sides: there is no agitation for vengeance or reparation.

The Wampanoag people are simply – and rightly – proud of their history and culture and want the opportunity to have it recognised, in the same way that the 30 million people worldwide who can trace their ancestry back to that raggle-taggle group of arriving English are recognised by way of the General Society of Mayflower Descendants.

And, as Peters points out, if the visual cue of their beautiful Wampum belt inspires somebody to restore it to its rightful owners then ‘we’d be very grateful to have it back’.

You can learn more about the Mayflower 400 celebrations at https://www.mayflower400uk.org