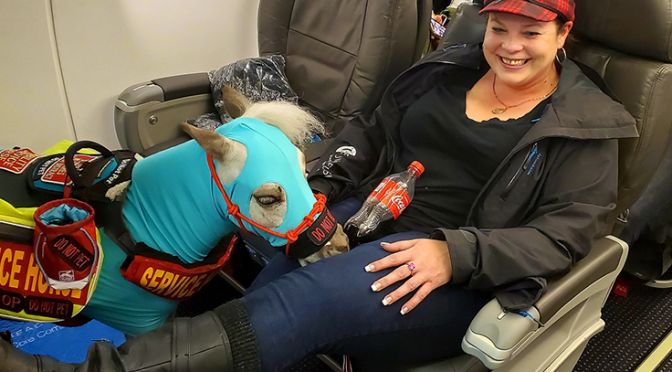 In a world where you can be anything, be kind…

That’s the message that Ronica Froese and her miniature service horse, Fred, would like the internet to hear.

Fred, a one-and-a-half-year-old miniature service and therapy horse, recently made his first trip by airplane, dressed in his bodysuit in case anyone on the flight was allergic to horses.

By all appearances, he had a fabulous time.

The internet is, of course, divided about whether or not Fred is a service animal or an emotional support animal (he’s the former) and whether or not he should be allowed on planes (he currently is, although the US Department of Transportation is reviewing their regulations about animals flying).

Perhaps not surprisingly given the headlines around Caroline Flack’s treatment by the tabloids, the media response been dreadful. Ronica posted a video on her Facebook page of four Fox News anchors roasting her on television, even making fun of her mental status for having a service horse.

To be clear, Ronica doesn’t have any mental disabilities. She has a physical condition and a service animal is completely reasonable as a support for her.

Not only is it sloppy journalism, or what passes for journalism in this age of personal opinion and sensationalism, it’s also unnecessarily cruel. It shows a disregard for both human and animal life and says much more about the anchors themselves than about Ronica and the good work that she’s doing.

So we’re here to give Ronica and Fred a big thumbs up. To stand with them for their right to fly and to spread love, joy and inspiration across the world.