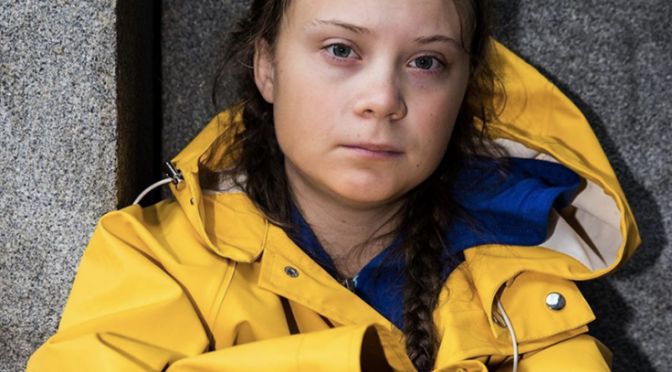 Greta Thunberg has won the Nordic Council’s Environmental Award for 2019.

However, the sixteen-year-old environmental activist from Sweden declined the prize, saying in a letter she posted on Instagram:

‘…the climate movement does not need any more awards. What we need is for our politicians and the people in power start to listen to the current, best available science.’

The award’s focus this year was aligned to the UN Sustainable Development Goal #12: Sustainable Consumption and Production.

The council acknowledged that the Nordics ‘stand out globally as heavy consumers of goods and services with high material intensity’. The award sought to recognise those initiatives or individuals leading the way to a more sustainable future.

‘In Sweden we live as if we had about 4 planets according to WWF and Global Footprint Network. And roughly the same goes for the entire Nordic region.

The gap between what the science says is needed to limit the increase of global temperature rise to below 1,5 or even 2 degrees – and politics that run the Nordic countries is gigantic. And there are still no signs whatsoever of the changes required.

The Paris Agreement, which all of the Nordic countries have signed, is based on the aspect of equity, which means that richer countries must lead the way.

We belong to the countries that have the possibility to do the most. And yet our countries still basically do nothing.

So until you start to act in accordance with what the science says is needed to limit the global temperature rise below 1,5 degrees or even 2 degrees celsius, I – and Fridays For Future in Sweden – choose not to accept the Nordic Councils environmental award nor the prize money of 500 000 Swedish kronor (£40,000; €46,000).’

Whether you agree with her decision to decline the award or not, what is undeniable is that Greta lives her beliefs out loud.

We’re cheering her on.