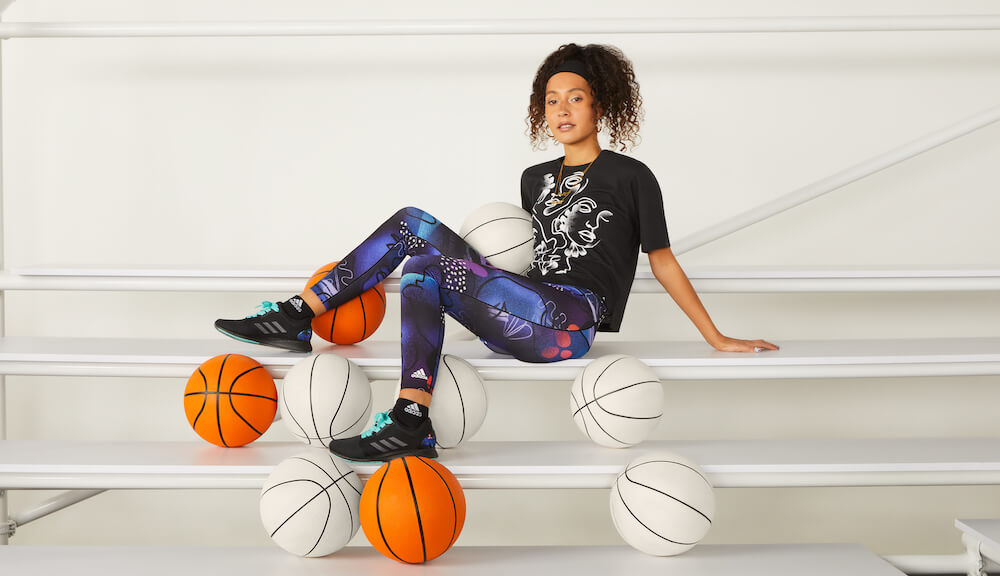 Sustainable sportswear giant Adidas has collaborated with Brooklyn artist Jordan Moss as a part of its Women In Power Campaign.

An emerging illustrator from Brooklyn, Jordan Moss elevates classic leggings, sports bras, sweats, and footwear with her trademark trippy graphic artwork. In line with the nature-inspired themes, key pieces in the collection are made with Primeblue. This high-performance recycled material is made in part with Parley Ocean Plastic.

Adidas and Parley for the Oceans, an environmental organization and global collaboration network, have worked together since 2015. Founded in 2012 to raise awareness of ocean pollution, Parley intercepts plastic waste destined for, or already in, the sea. The plastic is shipped to Taiwan where it is upcycled and transformed into yarn fibres — or Parley Ocean Plastic™. This goes on to create Adidas shoes, clothing and even instore support items such as hangers and mannequins. However, the use of Parley Ocean Plastic is just the tip of the iceberg. The sportswear giant’s sustainability strategy has been ongoing over two decades.

“We are doing something with Parley beyond putting the raw material into our product,” explained James Carnes, Adidas Vice President of Brand Strategy to Forbes magazine in Jan 2020. “We are getting people to realise this is a bigger topic we need to address.”

Since the late ’90s, the global business has addressed this topic in several successful ways. The 1998 Workplace Standards set mandatory requirements for fair working conditions, appropriate wages and a safe working environment at suppliers.  Since 2000, Adidas has continuously been listed in the Dow Jones Sustainability Index. This rates the top 10% best companies by assessing their economic, social and environmental performance. Another milestone was the partnership with the Better Cotton Initiative in 2004. Plus eliminating plastic bags from its stores in 2016. Equally, by 2018, Adidas products were more than 99% free of poly- and perfluorinated substances (PFCs) and using 100% sustainable cotton. It’s an impressive track record for a sportswear company.

The Women In Power collection represents another step in Adidas’ commitment to only use recycled polyester by 2024. The development of innovative Primeblue and Primegreen performance fabrics – where 100% of the polyester used is recycled – is key.

Carnes explains:
“We believe that through sport we have the power to change lives, and we are dedicated to creating that change. Since 1998, we’ve been developing and introducing innovations to END PLASTIC WASTE.”

The new fabrics’ introduction is part of Adidas’ Recycled Loop strategy. The focus? Using recycled plastics for products. Adidas has two more strategies in its bid to stop plastic waste. Its Circular Loop strategy focuses on items that were “made to be remade.” The first fully recyclable running shoe, Futurecraft.Loop, is fabricated from a single recyclable material from sole to laces. Moreover, it is fused together without the need for glue. After an initial test phase with 200 athletes in 2019, the used shoes were recycled into components for new shoes. This second generation of Futurecraft.Loop shoes is already back in the testers’ hands. The market launch is planned for later in 2021. Finally, Adidas’ Bionic Loop strategy is all about creating products that can be reused and remade before they’re returned to nature.

But the company wants to go beyond ending plastic consumption. By 2030, as a signatory to the UN Fashion Industry Charter for Climate Action, Adidas has committed to reduce both its own and its suppliers’ greenhouse gas emissions compared to 2017 by 30 percent. By 2050, the aim is to achieve climate neutrality. The company says Primeblue and Primegreen will help it ditch non-recycled plastics completely within the timeframe it set for itself.

The Women In Power collection with Jordan Moss ranges from $35-$180 and is available now via Adidas.