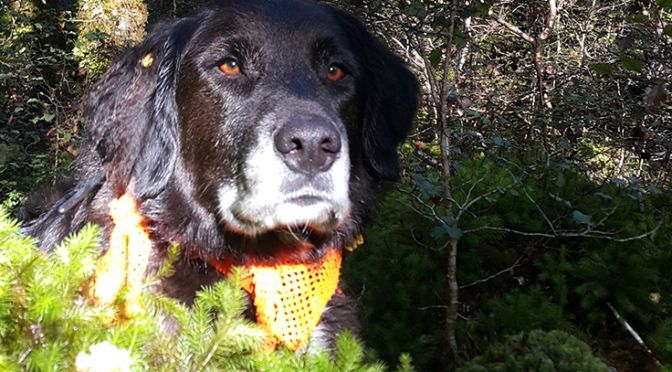 Ajax and the Kea

The kea is the world’s only alpine parrot, living on New Zealand’s South Island. Olive-green in colour with red underwings and a grey-black bill, these curious and intelligent birds are nationally endangered. Extensively culled between 1860 and 1970, they are now the focus of conservation efforts.

And that’s where Ajax comes in.

One of the world’s few kea detection dogs, Ajax and his owner Corey work for the Department of Conservation, monitoring and protecting the kea. As soon as I found this delightful video made by Michael Weatherall for National Geographic, I knew I wanted to learn more about this pair.

So I spoke to Corey to learn a bit more about Ajax and their work on behalf of the kea.

Have you always felt a connection to the outdoors?

I have always enjoyed exploring my surroundings and being outside. Growing up I spent many hours climbing trees, playing sports and tramping in the mountains of the North Island. I always knew that I wanted to work outside and take care of animals.

Did you get Ajax with the intention of training him to help with your conservation efforts, or did you discover his abilities after a period of time?

Before I got Ajax I had been working in Kea Conservation for a couple of years. It was a job where I was solo for the majority of the time and if anyone ever came along to help out, they usually found it hard to keep up because I was pretty quick moving around the mountains.

I decided that I wanted a teammate that would be useful and one that would be able to keep up with me. A dog was the natural solution. So I got Ajax with the intentions to train him up to be conservation dog, specialising in finding the endangered kea’s nests.

Was he difficult to train? What’s his favourite part of being out in the field with you?

Ajax is super smart and learns things quickly, that being said, it is still really hard to train a dog to find kea nests. Because kea are endangered and nest in the mountains of the South Island of New Zealand, it means they aren’t easily accessible. So, getting Ajax to learn what I wanted him to do for me took lots of trial and error and lots of hiking around mountainsides looking for nesting kea.

Ajax just loves being wherever I am, if I’m crawling in a kea nest, he wants to crawl in, if I’m climbing a steep cliff he wants to as well.

What are the main activities you and Ajax do when it comes to conservation? And how much time do you spend in the field, in the lab, doing educational work, etc?

I trained Ajax to find kea nests by indicating where there are large amounts of kea poo in one spot, this is an indication that kea are spending lots of time in the same area and therefore nesting. So, he will indicate where the entrance to a kea nest is and also he can let me know if there have been kea visiting a currently vacant nest, letting me know that kea are likely to come back and start nesting at a later date.

Most of our time working on the kea conservation project has been in the field. We have also done lots of school and public talks all about the conservation work that we do.

How has that changed with the coronavirus crisis and have you been able to continue with your work in a different format?

During the coronavirus lockdown period, Ajax has spent the whole time sitting outside in the sun, watching me renovate our house.

Why the kea? I’ve been reading about them and they sound like fascinating birds, but what is it about them that has captured your imagination?

I think I can relate to kea, they are cheeky, mischievous; they love being outside in the mountains, they love to fly and enjoy what life has to offer. They like to investigate things, pulling them apart to see how they work and fit together. This is something I spent a lot of time doing when I was a kid and still find myself doing it now.

The 15th of May is Endangered Species Day and the kea is one of the animals on the endangered list. We have heard success stories of species making a comeback. What can be done to help make the kea a success story?

There are many threats to kea, introduced mammalian predators being the most severe, but there are also still some human-related threats that still are impacting kea. If we stop feeding them when we see them at mountain road rest areas, back country huts and at ski fields, we can ensure that they don’t end up becoming scrounging birds that are likely to ingest unhealthy food and other substances that are detrimental to them.

What else do you do with your conservation work?

I have worked and volunteered on many conservation projects, in New Zealand and around the world. Mainly looking at the impacts of introduced predators on endangered native species. I’ve worked in Australia, Mozambique, Caribbean Islands, Grand Canyon, Christmas Island, and Sub-Antarctic Islands.

Can you tell us a little bit about the book you wrote about the work you do with Ajax? How did it come about, what will people find inside and how has it impacted your life/work?

The book is all about Ajax and the trials and tribulations involved with picking up a small puppy from a town 200km away to training him to be conservation dog and him becoming an integral part of my work and personal life. It talks a lot about conservation in New Zealand and in particular about the plight of the kea.

The book came about through a series of fortunate incidences, the most important being that a high school friend of mine, Michael Weatherall, made a short movie about me and Ajax and what we do for kea conservation. This film was seen by someone who runs a publishing company here in New Zealand and she rang me, proposing that we produce a book all about Ajax. A year later we had the book published.

The book has helped get the message out there, that we need to look after what we have and that conserving species and their habitats. I think a book about a working dog has got the conservation message to a slightly wider audience than a book about kea on its own could.

For people who can’t go into conservation as a full-time job, but they want to make the natural world a bigger part of their life, what would you recommend?

I think getting outside into some natural space would be enough. Learn to observe your natural surroundings, listen to the birds calling, the insects chirping, watch the animals move about in their daily routines, enjoy the fresh air and take care of your environment.

Has having a dog changed your life in ways you didn’t expect?

Having a dog has helped me mature and prepare for a life where there are other things to consider.

What are the main lessons you’ve learned from Ajax?

I think both Ajax and I have learned a lot from each other and if he could talk I’m sure he would agree that we have both learned that if something doesn’t work quite right the first time, that we should keep trying until we get it right.

Is there a book or podcast or film you would recommend to people who want a greater connection to the natural world?

I grew up watching Our World and I think that is what inspired me to get into conservation. Today’s equivalent are all the amazing wildlife documentaries that the BBC produce and they are all magnificent. But in recent times, I think a series that has been the most impactful for how amazing nature is the Cosmos Series.