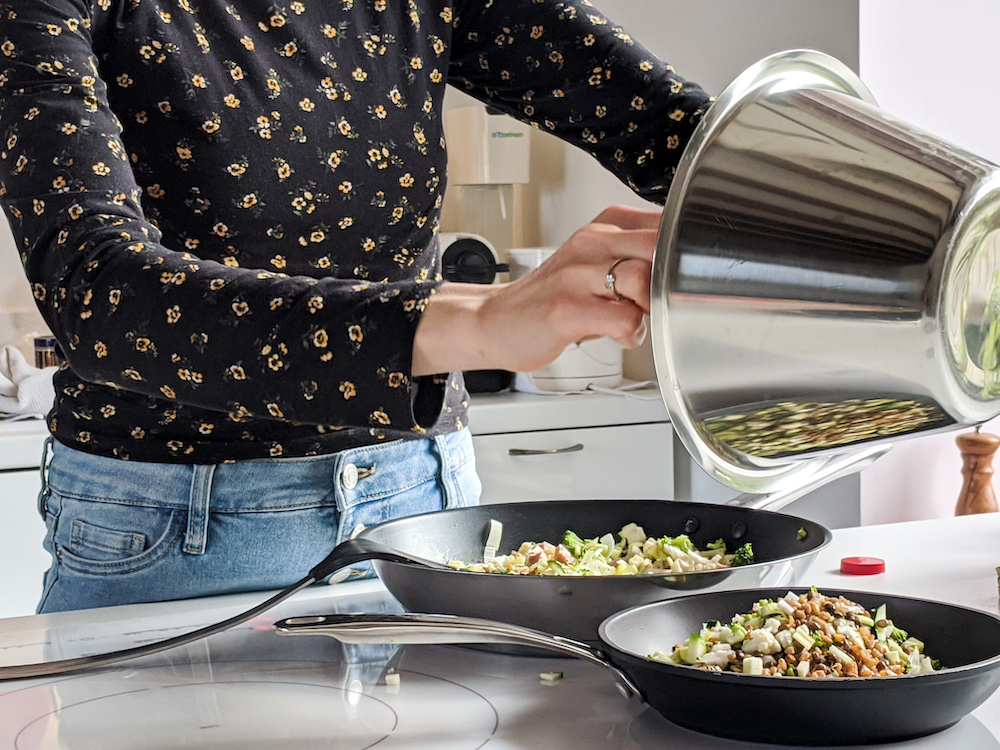 Going Zero-Waste In Your Kitchen Does More Than You Think

Anne-Marie Bonneau says she was never much of a ‘consumer’. The endless conveyor belt of useless, needless stuff never held much appeal. But she and her daughters loved to spend time cooking together, and so the majority of the waste that she generated came from the kitchen.

‘I had been reading about plastic pollution in the oceans,’ she told me in a recent call from her home in Palo Alto, California. ‘Particularly I’d read about a group of environmentalists that built a catamaran out of something like 12,000 plastic bottles and other waste. They sailed it from San Francisco to Sydney, Australia to raise awareness of plastic pollution. That caught my attention.’

Like many of us, Anne-Marie dutifully sorted her trash and recycled what she could. ‘I thought I was doing my part. But then you start reading about it and…what it does to animals, and I just wanted to drop out of that as much as possible. I told my older daughter, who was 16 at the time, and I said we have to get off of plastic. I don’t wan’t anything to do with this, this is horrifying. So that’s how it started.’

In 2011, the internet was a very different place to the one we have today. It wasn’t yet overflowing with websites dedicated to the zero waste movement. The community hadn’t yet formed where people could gather and share tips, tricks and hacks for living a plastic-free lifestyle.

One site that Anne-Marie found invaluable was Beth Terry’s My Plastic-Free Life. ‘Beth’s blog is awesome. But there wasn’t much else. If we heard something about plastic on the news we’d get so excited. And now it’s in the news every day!’

They started with a plastic audit to identify the areas that needed the most work, and then set out to do the weekly shop. Anne-Marie recalls that first trip to the grocery store after deciding to go plastic free, standing frozen in the aisles. ‘I said to my daughter, this is impossible everything is in plastic. A lot of the vegetables, cereal boxes, crackers, shampoo, deodorant – everything.’

But they persisted and started making changes slowly.

‘We slowly changed where we shopped, what we bought, what we ate. We switched our routine around. Living in Northern California, it’s not that difficult. We have bulk bins, year-round farmer’s markets, but it was hard at first.’

She started her own blog, Zero Waste Chef, to document the changes she was making and has become an active advocate for reducing plastic. She’s been covered in Vox, the Washington Post, Martha Stewart and Mashable UK among many others.

One of the points of resistance people have to going plastic-free is the thought that it will be more expensive. I asked Anne-Marie about that.

‘The ingredients I buy are more expensive,’ she acknowledges. ‘The vegetables and fruit I buy at the farmers market do cost more than something from a discount store. But I tell people it’s a package deal: I don’t waste any food. The average American family of four throws away $1,500 worth of food every year.’

And, of course, one of the benefits of going plastic free in the kitchen is that your health starts to improve.

The Healthy Side Effect of Going Plastic-Free

‘Our diets improved because we stopped eating processed foods. After a couple of weeks I realised, oh I’m not buying packaged, processed food anymore. I’m not eating cookies and crackers and chocolate bars.’

Anne-Marie echoed what several of our guests said – going plastic free is just the start to other lifestyle changes. And that overall, those changes save you money, offsetting the cost of better quality ingredients.

‘I buy secondhand. I don’t buy new stuff. I don’t need a lot of stuff I’ve discovered. I wasn’t a huge consumer before, but if I wanted something I’d just go out and buy it. Now I think, how am I going to dispose of it at the end of its life, and do I really need it or do I have something I could use instead? So, overall, I save money from living this way.

‘But some things are more expensive. The food I do eat is, but it tastes better, it’s higher quality, it’s better for me.

‘And when you shop at farmer’s market, you cut out the middle man. So the farmers get a much bigger chunk of the dollar that you spend. And unless you want to buy everything from big box stores and Amazon, we’ve got to support small businesses. Or Jeff Bezos is just going to own everything.’

We talked about how David Attenborough’s Blue Planet II was a pivotal moment in raising awareness for the problems of plastic pollution.

‘The stats on my blog were slowly going up and then Blue Planet II came out and –‘ she traced a line across the screen and then jumped it straight up, ‘they skyrocketed! The entire UK was freaking out over plastic pollution.’

Awareness in the US went up slightly, but not as much in the UK. Anne-Marie believes that’s because the documentary was widely available on the BBC – ‘you all love the BBC!’ – while in the US it was on Netflix, which requires a subscription to watch. It may also be that the UK is a maritime country.

‘There are more people living in coastal towns in the UK because you’re an island, whereas here, if you live in the middle of the States and you’re not near water…you won’t see the problem. I would read about these coastal towns that were going plastic free and that just hasn’t happened here as much.’

‘Without grassroots activism, industry and government has no reason to change. They’re just going to keep doing what they do. So although it may feel futile, by one person refusing plastic – if millions and millions do it, it does make a difference. It’s important that individuals take action.

‘You hear a lot of people saying that it’s the big corporations fault; stop putting the blame on the consumer…But we do buy the stuff. And I know it’s the way our society is set up and we’re swimming upstream by doing this. But why would they change unless people stop buying their stuff and demand they change.

‘We need both. We need regulation. It’s not going to change drastically without government regulation.’

Palo Alto, and California in general, is fairly progressive when it comes to plastic bans. They’ve banned plastic shopping bags and this year that’s being extended to straws, cutlery, coffee stir sticks and even the produce bags for fruit and veg in supermarkets and farmer’s markets. And soon restaurants will have to provide reusable containers for takeaway and won’t be able to use throwaway cups.

And part of why those actions are happening is down to the grassroots activism Anne-Marie mentioned.

‘The plastic ban that has taken place in Palo Alto with the straws and the produce bags, that was started by the Girl Scouts. A local Girl Scout group started a petition to ban plastic straws and they got all these signatures. They were very active and they got city council’s attention and it grew from there. Just a bunch of kids!’

Her advice for going plastic-free?

‘I think if you try to do everything at once you’re going to get discouraged so just start with something small. And then it becomes a game. It’s fun to try to solve these problems.

‘I just wanted to stop consuming plastic. I saw the albatross with the plastic in its stomach and it was so heartbreaking. I just wanted to get off plastic, I had no idea I would benefit from it. My health improved. I saved money. I’m happier. I rarely get sick.

‘Just do what you can, do your best. And don’t get hung up on being perfect because it’s not possible.’