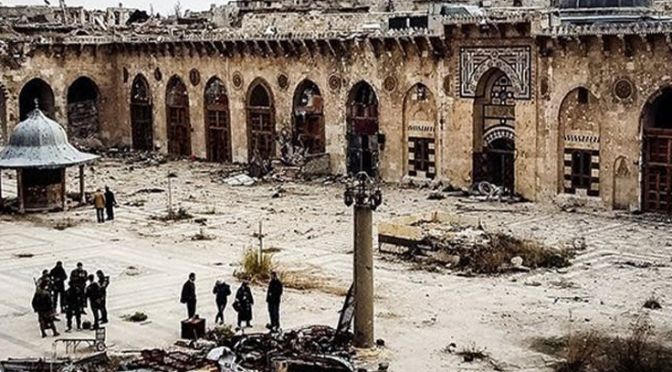 There was a horrified reaction around the world when US president Donald Trump tweeted, at the height of America’s ongoing dispute with Iran, threatening Iran’s unparalleled cultural heritage. He wrote that the US had identified 52 sites, including important historical buildings and artefacts, that would be targeted if Iran retaliated against the killing of its top military commander Qassem Soleimani on January 3.

After Trump’s advisors – including the Pentagon – told him this would be illegal he pulled back from that position. But why the fuss? Historic buildings and places are damaged and destroyed during conflict through collateral (or accidental) impact, and historic artefacts get looted. That’s war. For hundreds, if not thousands, of years, armies were paid by being allowed to loot and run riot after winning a battle. The military mind cared little about anything other than winning the war and going home richer.

There are many cultural and academic reasons for trying to protect heritage during armed conflict, most of them irrelevant to those doing the fighting. We need to realise that cultural property protection (CPP) will only be effective if militaries and their political masters take it seriously.

Perhaps surprisingly, CPP has a long history in military law. The earliest surviving code of discipline for an English army, the 1385 Durham Ordinances, was drawn up for Richard II’s invasion of Scotland. It included an article not to damage religious or other cultural buildings. More recently, and ironically given Trump’s tweet, the USA is accepted as the first country to make CPP part of its military policy through the 1863 “Lieber Code” written for Federal forces during the American Civil War.

Today, the intentional targeting of cultural and religious sites that are not military objectives, have no military function, and make no contribution to military action, is prohibited specifically in international humanitarian law, most notably in the 1954 Hague Convention on the Protection of Cultural Property in the Event of Armed Conflict and its Second Protocol drawn up in 1999.

CPP is also an integral part of the 1977 Additional Protocol I to the Geneva Conventions, the 1998 Rome Statute and UN Security Council Resolution 2347. Whether any specific country has ratified one or all of the above, CPP is increasingly regarded as “customary international law” and applies to all sides in any conflict.

And it works. Military commanders were found guilty and imprisoned for deliberately attacking cultural heritage under the International Criminal Tribunal for the Former Yugoslavia. Meanwhile, Ahmad al Faqi al Mahdi, a member of Ansar Dine, an extremist group associated with al-Qaeda in the Islamic Maghreb, was sentenced to nine years’ imprisonment in 2016 and given a significant fine by the International Criminal Court for the deliberate destruction of cultural heritage in Timbuktu, Mali.

Since Sun Tzu wrote The Art of War in China in the sixth century BC, military writers have argued that to destroy the cultural heritage of your enemy is bad military practice. It gives the first reason for the next war and often makes a defeated population harder to govern. On the other hand, protecting the cultural heritage of a population you have conquered shows them respect and they are easier to govern. This is what modern soldiers often refer to as a “force multiplier”, something that makes their main job of winning a conflict that much easier.

The UK established a CPP Unit in 2018. At its first training course, developed in partnership with the UK national committee of the Blue Shield (an advisory body to UNESCO regarding CPP), members of the British unit were joined by colleagues from six other countries all of which are setting up, or enhancing, similar units.

The military cannot be expected to deliver good CPP on its own – if we want to protect cultural property, it’s important that those in the heritage sector develop a close partnership with armed forces over the protection of cultural property. This does not mean heritage experts need to support any particular side in a given conflict, but they must be ready to work with all sides.

This partnership needs to be developed over time – it’s not good enough to start thinking about it once a conflict has begun. The Blue Shield has identified four points at which this partnership needs to exist: long-term and ongoing education; immediately pre-deployment, providing an understanding of the heritage in a specific area of operation; during conflict itself; and post-conflict.

Often after actual fighting is over, the military is frequently the only organisation with the resources to protect cultural heritage. This can range from engineering support to stabilise a building, to providing troops to protect sites or museums from looting, to liaison with local heritage professionals, and the evacuation of collections to safer and more stable locations.

These are all different and may require different expertise. As more countries develop a military capability regarding CPP, such units may begin to take the lead on protecting heritage during and after conflict, although they will still require significant support from the heritage community.

It is also clear that cultural heritage is not only threatened by collateral (accidental) damage but by a range of other accidental or deliberate actions. The Blue Shield has identified eight risks to cultural heritage that, if addressed, might significantly lower the threat. Those risks are: lack of planning, lack of military awareness, accidental damage, deliberate targeting, looting, deliberate reuse of sites, enforced neglect and development.

Read more: Iran’s cultural heritage reflects the grandeur and beauty of the golden age of the Persian empire

Cultural heritage is what makes us human. It gives us a sense of place, and identity. On occasion it is used as a weapon to show difference, as in the targeting of minority religious groups and their buildings, such as the Yazidi in Iraq by Islamic State. But it can and should be used to explain and explore a common human past – what makes us the same. We can’t do that if cultural heritage is destroyed, or worse deliberately targeted, during war.