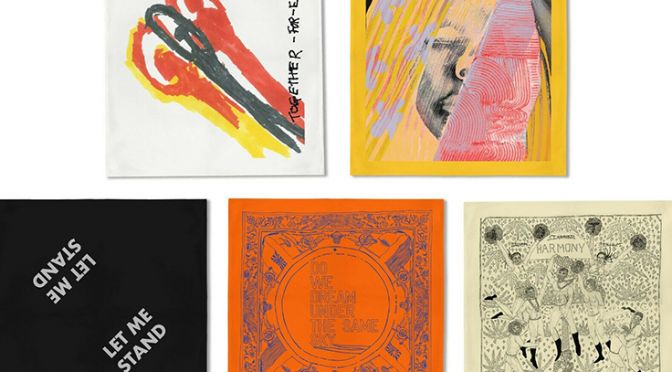 Banding Together for Democracy

‘The vote is precious. It is almost sacred. It is the most powerful non-violent tool we have in a democracy. And we must use it.’
– Representative John Lewis (1940 – 2020)

As Republicans and Democrats gear up for the sprint to Election Day on 3 November, there’s been a lot of coverage about getting out the vote.

Polling stations are shutting down – conveniently located in BIPOC communities that are unlikely to vote Republican. Trump has taken every opportunity he can to sow seeds of doubt about voter fraud. And his hand-picked supporter now in charge of the United States Postal Service has been systematically gutting it – making it more difficult for mail-in ballots to get through in time.

But this election is too important to take actions like this – that preserve the status quo of those in power – without a fight. And that’s just what the powers-that-be are going to get.

One part of that fight comes in the form of a new artist-led creative project with the goal to raise money and awareness in support of community-led voter-registration groups Rise, Mijente and Woke Vote.

The campaign brings together 15 world-renowned artists, each one providing an original design that has been printed on limited edition bandanas.

‘This project is rooted in the history of bandanas as symbols of unity. From the abolitionist movement to Rosie the Riveter, bandanas have been wearable markers of alliance and action,’ said Nora Halpern, one of the curators of the project.

‘By bringing together long-time artist change-makers, our goal is to celebrate and elevate the myriad voices that make up American voters. Throughout history, artists have proven their unique ability to awaken, challenge and inspire us. We are grateful for the generosity of spirit of the 15 powerful artists who have joined us in our effort, alongside eBay for Charity, to “band together” and support this vital and timely cause.’

The limited-edition artworks, made to be worn or displayed, are available at eBay.com/ArtistsBandTogether, with 100% of proceeds supporting programmes that educate, register, and mobilise voters: Mijente, Rise and Woke Vote.

You can buy the bandanas individually, in three curated sets or as one complete set. The first 8 bandanas are available now, the second set of 7 will be available from 1 September. They cost $35 each.

‘eBay is the partner of choice for artists and charities looking to expand their reach to a global audience of millions,’ says Sam Bright, Vice President, General Manager of Verticals, eBay North America. ‘Together with these incredible creators and organisations, we are tapping the power of eBay’s vibrant community to empower voices and mobilise voters.’

The artists participating in the campaign are:

‘I believe in the Artists Band Together project because I think we all can make the country better, and that art and the humanitarian spirit of artists can play a valuable role in doing so,’ said participating artist Shepard Fairey.

‘This project embraces the principles of democracy by making art accessible through the bandanas, while also providing support to the grassroots voting initiatives of the organisations benefiting from the profits — Rise, Mijente, and Woke Vote. The calibre of artists involved is inspiring, and I believe in the story behind each work of art. I think that everyone from collectors to activists will be embracing these as collectable symbols of democracy at this historic moment.’

About her design, the late artist Luchita Hurtado said, ‘“Together Forever” is a slogan of our time that confronts racial inequality, environmental advocacy, and united survival during a global pandemic, all in just two words. I don’t think there’s anything more important, that’s what the human race needs.’

‘Everyone has to do something to change the culture right now,’ said artist Marilyn Minter. ‘We’re waging a battle on two fronts: fighting COVID-19 and fighting stupidity. I’m saying resist getting Covid and selfish behaviouir. Resist complying with the ignorance that’s pervading our world right now.’

These groups have a proven track record of increasing voter turnout through long term efforts to engage and inspire voters nationwide. The 2020 electorate is likely to be the youngest and most racially diverse in history with Gen Z representing 1 in 10 eligible voters and people of colour representing 1 in 3.

Sales of the Artists Band Together artworks will benefit equally Rise, Mijente, and WokeVote. To purchase and for more information please visit eBay.com/ArtistsBandTogether.