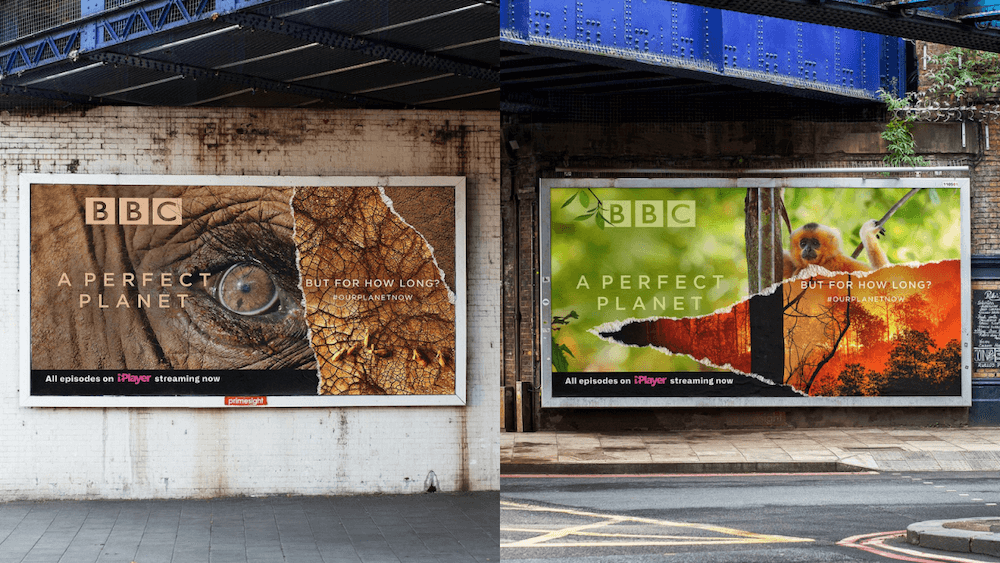 The BBC just set one of its own billboards on fire. Well, sort of. It’s a stunt intended to help promote “A Perfect Planet,” the recent BBC David Attenborough series. The show delivers stark warnings about climate change. This message is Attenborough’s calling card. The 94-year-old naturalist has become one of the most outspoken advocates for climate action.

Last November, BBC Creative’s team launched a billboard campaign to promote the series. Many of the billboards featured animals that appear in the series. But the campaign was two-pronged. At the end of the series, BBC hijacked those same billboards with graphics that made it appear like each of the billboards had been ripped open to reveal something else. They revealed a planet in peril.

“We tried lots of different fish and various shots of bears,” team member Michael Tsim told the Drum. “And we experimented working with designers to get the matching right. The fish had to match the bottle, and the monkey’s tree had to fir with the burning forest, to make the most impactful. So it took some time to get the right framing for all the different formats.”

The billboards show a possible future for the planet. One rips open to a forest fire aimed at highlighting the urgent need for climate action. Another shows a grim-looking ocean, with plastic bottles swimming instead of fish. Another turns the wrinkled skin of an elephant into dry, drought-stricken land. The campaign also included a do-over of the original trailer. It looks eerily off-balance, intended to make the viewers uncomfortable. The trailers appear below in the order they were released.

The stunt became another platform for the planet, by using all eco-friendly materials including non-toxic inks. All of the display panels and banner materials are recyclable.

“At the BBC, we’re in a unique place where we can influencer popular culture, using shock tactics to do that,” says James Cross, creative director at BBC Creative.

Attenborough’s series follows up to “A Life On Our Planet,” a special he calls witness statement. Sharing anecdotes from his nine decades on the planet, he shows how things have changed. Much of that for the worse.

The activist also took to Instagram recently to promote his programs. He’s since left the platform, but his team left it with a video clip, and a message of hope. “What happens next is up to us,” Attenborough said. “This might be a wrap for this account – we won’t be posting anything else, though the account will stay open for you to watch David’s messages – but we hope it’s a springboard for many others to build on and share the ways we might create a sustainable future.”