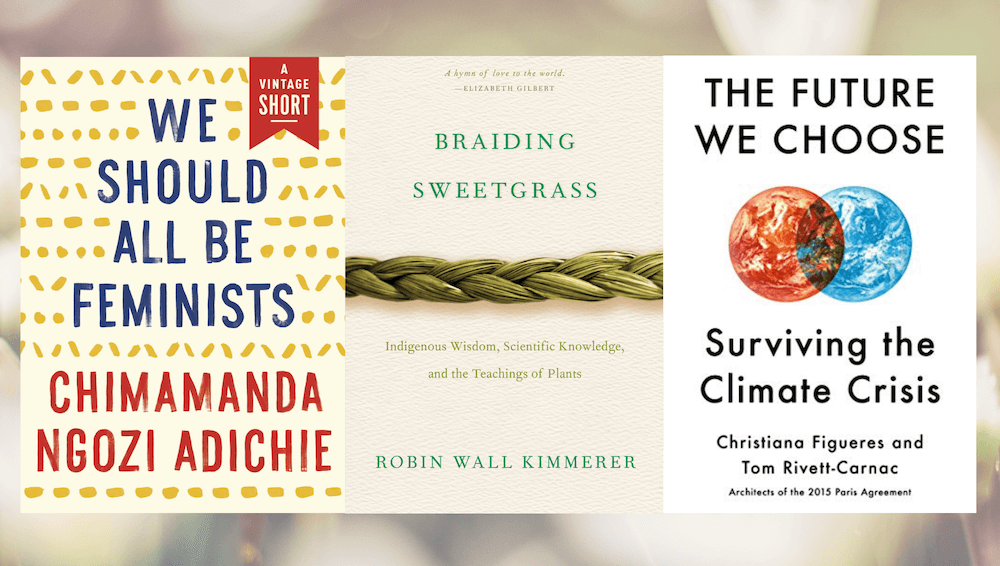 9 Books By Female Activists That Every Woman Should Read

Get inspired and get activated with these female authors.

Looking for something inspired and inspiring to read that will activate your activism? Look no further than these inspirational and informative books authored by women. Ranging from social justice and animal rights to feminism, political empowerment, and climate activism, this curated collection is for women, by women.

A must-read for any activist, Yousafzai’s autobiography exemplifies the power of one. It tells the story of how a young Pakistani girl refused to let the Taliban dictate her right to an education. As a result, at age 15, she was shot in the head at point blank range. She recovered and has subsequently become the poster girl for peaceful activism and the youngest-ever Nobel Prize winner at age 17. However, Yousafzai’s story is more than about the fight for female education. It’s also a love letter from a daughter to parents who championed their child’s beliefs every step of the way.

This essay collection was cited in The New Republic as the piece that “launched the term mansplaining.” However, Solnit has rejected the term, quite rightly, as it dismisses the power of her words and arguments. The eponymous essay focuses on men seemingly believing that no matter what a woman says, a man always knows better. Solnit describes how the silencing of female voices is an infringement on female liberty and is in fact an abuse of power. “The Longest War” looks at violence against women and how the online community facilitates this environment. “In Praise of the Threat: What Marriage Equality Really Means” theorizes that same-sex marriages pose a threat because they demand equality in partnership, something women haven’t visibly had. An illuminating exploration on every facet of women’s interaction with men.

3. We Should All Be Feminists (2014) by Chimamanda Ngozi Adichie

In her 64 page essay, Adichie argues that the word “feminist” isn’t an insult, but a compliment to be embraced by all. Furthermore, she focuses on the need to transform social beliefs and gender constructs that promote the disparity between men and women. For her, the bottom line is empowering women should not mean disempowering men. The book has been unanimously praised. The Telegraph review stated, “It just might be the most important book you read all year” whilst The Independent said, “It would be the book I’d press into the hands of girls and boys, as an inspiration for a future”. Since 2015, the book is given to every 16-year-old high school student in Sweden.

As beautifully written as it is informative, Kimmerer is a Citizen of the Potawatomi Nation, where plants and animals are considered teachers. However, she is also a professor of environmental and forest biology. This book weaves together these two facets of her life to illustrate how important the symbiotic relationship between people and the planet is. Kimmerer shows how living beings – from strawberries to salamanders – can awaken our ecological consciousness and teach us better ways to operate in the world. Highlighting the fact that indigenous communities make up 5% of the global population, but are fighting to protect 80% of the world’s biodiversity, she makes a compelling argument for indigenous wisdom.

5. When They Call You A Terrorist: A Black Lives Matter Memoir (2018) by Patrisse Khan-Cullors and Asha Bandele

From one of the co-founders of the Black Lives Matter movement, this New York Times best-seller is both a poignant coming-of-age story and stirring illustration of the power of activism. Frustrated by George Zimmerman’s acquittal after shooting 17-year-old Trayvon Martin in 2011, Cullors and her community leader friends Alicia Garza and Opal Tometi founded the Black Lives Matter movement. Whilst seeking justice for the Black victims of systemic police brutality, Cullors and her fellow protestors were called not activists, but terrorists. Exploring the life experiences that brought Cullors to the point of demanding that society needed to change is both powerful and empowering.

In 2011, the American Association for the Advancement of Science stated that dolphins and orcas should be legally regarded as persons. Animal law can be studied and practiced at animal advocacy organisations. But does the legal system offer the best path to protecting animal rights? Exploring race, gender, class, sexuality, and species, author S. Marek Muller tries to answer this question. She highlights veganism as the route to true liberation for both humans and animals.

What makes Jerkins writing stand out is its accessibility. Her interlinking essays cover the everyday facets of life that all women can relate to and apply them to pop culture, feminism, black history, misogyny, and racism. “This Will Be My Undoing” is a debut novel by a writer in her early 20s but it is mature, insightful and searingly honest. Writing about the stigma of therapy, her body image and dating men “who don’t see colour,” this is as close as you’ll come to a hearing what it’s like to “be” Black in contemporary US society. Definitely an author-activist to watch.

More women campaigned for office in the 2018 election cycle than at any other time in US history. “See Jane Win” covers the journeys of four candidate: Abigail Spanberger of Virginia, Catalina Cruz of New York, Anna Eskamani of Florida, and London Lamar of Tennessee. Award-winning journalist Moscatello examines the realities of running for office as women and as women of color. From the decision to run through to Election Day, “See Jane Win” is a rollercoaster of a read, as inspiring as it is a brutal indictment of the tougher path to power for women.

9. The Future We Choose (2020) by Christiana Figueres and Tom Rivett-Carnac

As Executive Secretary of the United Nations Framework Convention on Climate Change (UNFCCC) from 2010-2016, Figueres’ “collaborative diplomacy” brought together governments, corporations, activists, financial institutions, think tanks and NGOs. The result was the unprecedented 2015 Paris agreement. Currently, co-founder of Global Optimism, her book (co-authored with climate lobbyist Rivett-Carnac) presents two scenarios for 2050. The first is “The World We Are Creating” – the disaster we are currently heading towards. The second is “The World We Must Create,” a green planet where global warming and GHG emissions are under control. Practical, pragmatic and positive, this book sets the roadmap for moving beyond the climate crisis and into a better future for all.