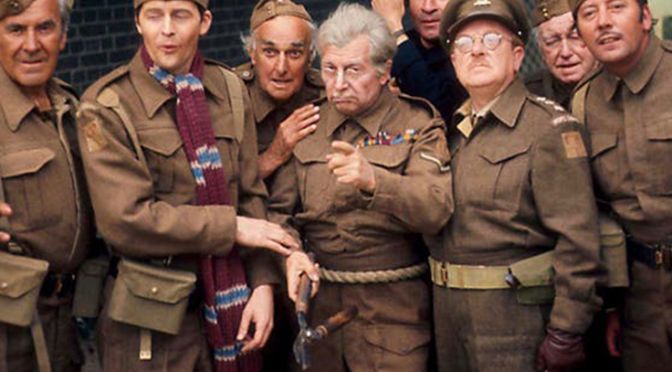 Break Out the Laughs

Five TV sitcoms to help get you through lockdown

It’s a truth frequently acknowledged that laughter is the best medicine (at least when paracetamol isn’t available). A few months after the British government launched the National Academy for Social Prescribing – whose aim is to refer vulnerable people towards cultural and community activities to underpin their mental wellbeing – this truth has rarely felt more timely.

Art may disturb and challenge us – but it can also console and inspire us in our darkest hours.

There’s something remarkably reassuring about the situation comedy. It embraces a homely nostalgia, an old friend to which we return time and again from the comfort of our couches, a pleasure to share with family and friends. It’s ingrained in our memories – its best lines as easily parroted as those of Monty Python’s parrot sketch.

Sitcoms offer more than the shallow pleasures of schadenfreude, with good humour borne out of resilience and camaraderie. The stubborn humanity of its emphatically ordinary protagonists reminds us of our own heroic capacity, as Yeats supposed, to live in joy and laugh into the face of death.

But such satires upon Armageddon as Whoops Apocalypse or You, Me and the Apocalypse may not be to everyone’s tastes at this time. I, for one, won’t be sitting down tonight to watch The Last Man on Earth. My preferred small-screen security blankets tend to be less blunt as to our impending doom.

These aren’t necessarily the greatest sitcoms ever made – though they’re all very fine indeed. I’ve not included Friends, Frasier or Fawlty Towers because, works of genius though they are, they don’t present quite the foil to quotidian suffering or existential angst that these do. I’ve avoided Steptoe and Son because it makes Waiting for Godot seem blithe – and The Good Life and Outnumbered may hit too close to home.

My last two choices deliver reliable family viewing. The first three may provide an antidote to having too much of that.

The self-styled show about nothing is inevitably about everything. Seinfeld combined Jerry Seinfeld’s relaxed observational comedy with Larry David’s sharper and more anxious perspective upon the daily horrors of life (which we still relish in Curb Your Enthusiasm).

As I suggested in a recent article, Seinfeld “encompassed the aspirations of Generation X, then in the influential last throes of its youth”. And, in doing so, it addressed the nature of the human condition through its hilarious and sometimes hysterical portrait of the frustration of living in a world plagued by soup Nazis, interminable subway journeys and inescapable multi-storey car parks.

In Elaine and George, we find an everywoman and everyman equal to Leopold and Molly Bloom – those resolutely flawed souls in James Joyce’s Ulysses, struggling with all the impossible optimism of Albert Camus’ Sisyphus against the vicissitudes of modern existence. (We must, Camus finally reminds us, imagine Sisyphus happy.) And for British viewers it’s available for free online from Channel 4.

What new can be said about Phoebe Waller-Bridge’s comedic tour de force? A surprise international hit, this tragi-comedy doesn’t so much balance pathos and laughter as deliver them both simultaneously in gut-wrenching chunks.

Yet somehow – despite its unsentimental knowingness – it remains uncompromisingly focused upon its faith in the redeeming quality of love. And it’s all available for free from the good old BBC.

This may seem a strangely stoical choice in a time when we must trust our lives to the decisions of politicians. Yet Armando Iannucci’s masterpiece The Thick of It, even in its foul-mouthed candour as to the hypocrisies of power, remains firmly on the side of cheerful scepticism rather than soulless cynicism.

There’s something gloriously vital in Malcolm Tucker’s remorseless streams of vitriol and in the resigned but resilient submission of his various victims to their verbal batterings. And there is something curiously life-affirming in the well-intentioned, deluded innocence of all its players – including even the monstrous but ultimately tragic figure of Tucker himself. It is as epic and truthful as War and Peace. (And, again, licence-fee-payers can find it for free on the BBC.)

Graham Linehan has, as I’ve previously suggested, almost single-handedly revived the glories of the family friendly situation comedy. But even more than the incandescent IT Crowd and the sublimely ridiculous Count Arthur Strong, it was this early collaboration with Arthur Mathews which not only sealed his reputation as a master-craftsman of the genre but which has also best stood the test of time.

The gentle, innocent and truly loving friendship between Dermot Morgan’s Ted and Ardal O’Hanlon’s Dougal – like that between Stan Laurel and Oliver Hardy – beautifully counterpoints the utter pandemonium which they repeatedly let loose.

Available from Channel 4, it’s a series which, even after multiple viewings, still rewards re-watching, either as a self-indulgent treat or as a joy to savour with your loved ones. That’s the miracle of Father Ted. However absurd things get, Ted make things seem better.

As the world crashes down around our ears, let’s not forget that one day, maybe not such a very long time away, someone somewhere will produce a brilliant sitcom about all this. It’s happened before. Launched just 23 years after the end of the second world war, Dad’s Army remains the BBC’s most enduringly appealing family comedy.

A Don Quixote figure maybe, but one who defends the nation against real enemies (and Nazis at that), Arthur Lowe’s Captain Mainwaring may be preposterously pompous but is also fundamentally heroic. (One forgets how often he risks his dignity, reputation and even his life for the sake of his platoon and their noble mission.)

If, as our media and politicians keep telling us, we’re now operating on a war footing, then Jimmy Perry and David Croft’s classic comedy (still playing on the BBC) can still teach us a lot about how we might best keep calm – or at least not panic too much – and carry on.

Alec Charles, Dean of the Faculty of Arts, University of Winchester