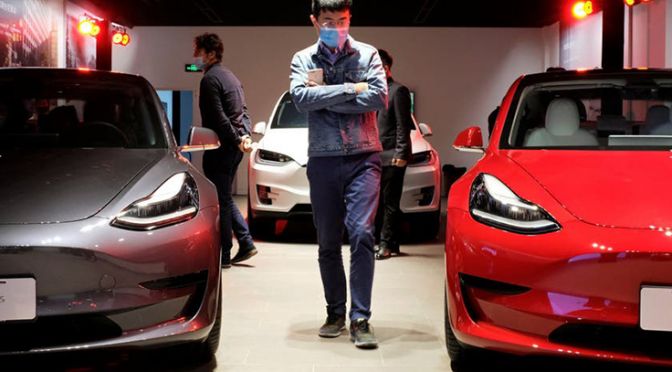 Carbon emissions bounce back as lockdown lifts, but breakthroughs in battery technology could help us switch to electric vehicles

There are no silver linings to a global pandemic that has killed almost 425,000 people and has plunged the world into a recession. We’ll get that out of the way upfront.

But one of the temporary benefits of all of us staying at home was that emissions fell by a quarter and air quality improved dramatically. However, emissions are now bouncing back as lockdown restrictions ease and people are turning to their cars to get around rather than use public transportation for fear of catching COVID-19.

‘Things have happened very fast,’ Corinne Le Quéré, a professor of climate change at the University of East Anglia told The Guardian. ‘Very few countries still have stringent confinement. We expected emissions to come back, but that they have done so rapidly is the biggest surprise.’

Corinne and her colleagues have updated a report that previously showed global emissions were down 17% in early April compared with the average for 2019. The figure is now only 5% down on 2019 levels and the expected drop in emissions for the entire year are between 4 and 7%.

As Fiona Harvey of The Guardian notes: ‘That is not enough to make a significant contribution to the cuts in emissions needed to fulfil the Paris agreement on climate change, which will require structural changes to transport systems and how energy is generated.’

‘Road transport is the most responsive sector,’ said Corrine. She said that government rescue packages should be used to support the switch from high to low carbon infrastructure, making buildings more energy efficient, restoring our natural habitats and removing the obstacles to electric vehicle adoption.

On that last point, the UK government brought forward its ban on the sale of new petrol and diesel cars to 2035, five years earlier than previously planned as reported by the BBC. To facilitate this switch to electric vehicles, the UK needs 25 million charging points across the country. At the moment, we only have 11,000.

Something that a Green New Deal could address, surely.

Read more: The UK could cut carbon emissions by 12% if all cars went electric

The Independent reported this week on a breakthrough in battery technology coming out of China. The world’s largest maker of batters for electric vehicles – Contemporary Amperex Technology Co. LTD (CATL) – has created a battery that can last for 1.24 million miles (up from the current 200,000 miles) and 16 years. That’s ‘the equivalent of making more than 400 journeys from coast-to-coast in the US’. It also has the potential to be reused in a second vehicle, making it more cost-effective in the long-term.

‘If someone places an order, we are ready to produce.’ Zeng Yuqun, CATL Chairman. The company currently supplies batteries to Tesla and Volkswagen AG, but it’s not yet known if either company have placed an order for the new battery.

While the immediate bounce back of emissions is worrying, there is still cause for hope with these developments.

Any improvements to technology, manufacturing and infrastructure will mean that electric vehicles will continue to become more accessible and affordable for the average citizen, enabling them to make the switch.