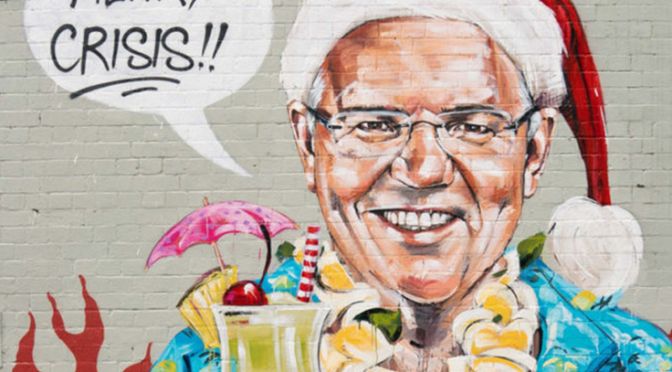 ‘You can smell it in the air that now is the time to really push on climate change. If nothing happens now, it’s never going to fucking happen.’

In what’s being dubbed as the ‘nation’s largest unsanctioned outdoor art exhibit‘, 41 Australian artists took to the streets with their protest art.

Over the course of a weekend, the artists, dressed in hi-vis vests, replaced 78 outdoor advertising posters in Sydney, Melbourne and Brisbane. The bespoke artwork lashed out at a government whose inaction on climate change has sparked anger at home and abroad.

Fossil fuel featured prominently, as did the bravery of firefighters. And many of the artists worked to capture the devastation of the flora and fauna across the landscape the world watched burning.

The artworks were installed on local bus stops and other outdoor advertising spaces. Each one featuring a QR code linked to one of 30 charities working directly to combat climate change and rebuild after the fires.

#BushfireBrandalism from Partier Bresson on Vimeo.

‘As a collective group of Australian artists, we have been driven to reclaim public advertising space with posters speaking to the Australian government’s inaction on climate change and the devastating bushfires. We do not accept that this situation is ‘business as usual’.

We are making these issues visible in our public spaces and in our media; areas monopolized by entities maintaining conservative climate denial agendas. If the newspapers won’t print the story, we will!’

The media referenced in that remark is Rupert Murdoch’s empire – he controls 59% of the daily newspaper sales in the country.

While the bushfires are a regular occurrence in the Australian calendar, climate change is driving the drought, higher temperatures and strong winds that make the situation much harder to control.

Art in a Time of Protest

There is a rich history of artists using their chosen media to protest injustice, demand change and speak the truth.

From the Dadaists of the 1920s protesting the absurdity of war to Gordon Parks documenting the American Civil Rights movement. From the Guerrilla Girls fighting for the inclusion of women and minorities in the arts to Ai Weiwei and Pussy Riot both challenging censorship in their own ways and countries.

‘A lot of people can’t engage with politics,’ said Raju Rage, an artist, educator and activist, on a recent Tate podcast. ‘And a lot of people don’t want to engage with politics in that political way of activism and direct action; a lot of people don’t feel they have the knowledge or the education to engage or to know what’s happening with the State; whereas art, I kind of feel has a cultural language, and a lot of people generally in the world like to connect with culture; so I feel like it can reach people that activism and formal politics doesn’t reach. Art can kind of have its own language of how it communicates.’

While the Brushfire Brandalism artwork has been removed from the public spaces, you can see all the posters and learn more about the collective movement on their website.

Check out our article about how you can help Australia recover from the bushfires.

And then DIY. Take up your pencils, paintbrush, microphone or keyboard and let your voice be heard about the issues you care about the most.

We can’t wait to see the change you’ll make…