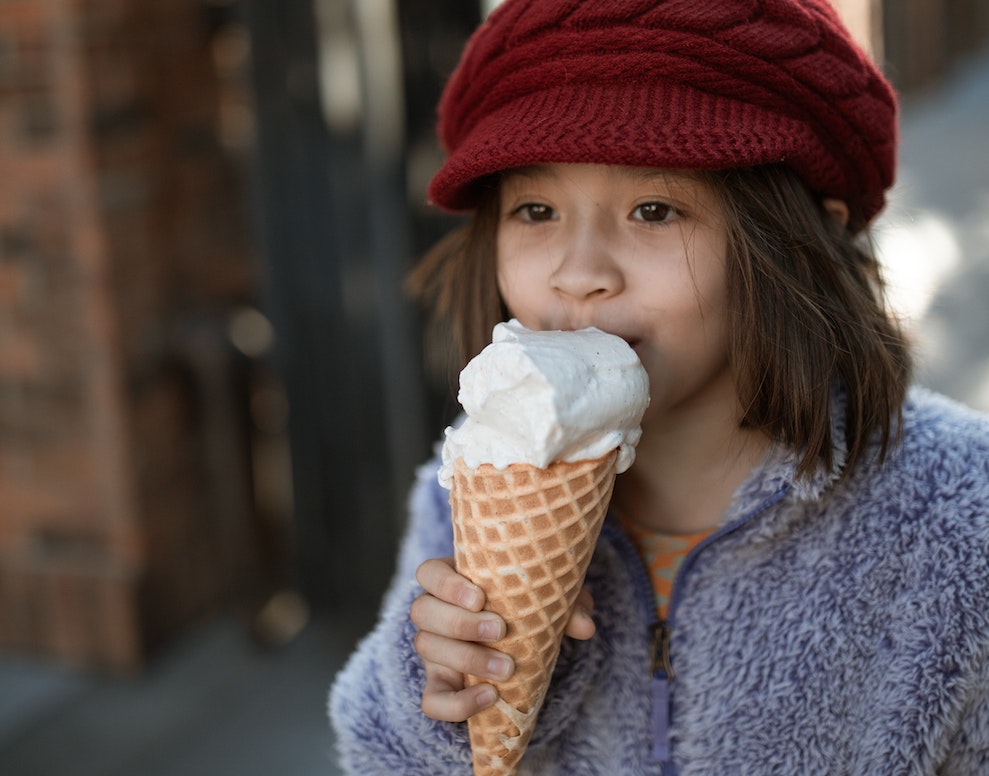 Can Vegan Ice Cream Save the World?

Few things bring as big a smile to my daughter’s face like ice cream. Vegan ice cream, that is. She’s never had the dairy stuff.

We live around the corner from one of the best ice cream shops in Los Angeles, Van Leeuwen. The New York and LA-based chain offers a wide selection of dairy and non-dairy ice cream. The brand boasts a commitment to high-quality and low-impact ingredients. Even its sprinkle options are made with natural colors, no artificial blues or reds in there. It’s the exact opposite of the 31 junky flavors I grew up eating at our neighborhood purveyor.

Ice cream brings wide eyes and big decisions as my daughter and I read through the daily offerings pinned up on the menu board. It brings contemplation and curiosity — there are no more sample spoons during a pandemic. You have to just make a choice and hope for the best. My daughter chooses with reckless abandon, working her way through every flavor like a pro. She tastes and savors each bite, like a fine wine, never second-guessing her choice. After all, all ice cream is holy to 7-year-olds.

I think a lot about ice cream these day, even though I don’t quite like the stuff myself. I know I’m in the minority, especially in my own house. But it’s too cold for me, and the melted pile of goop that’s its true, non-frozen essence, is not for me. Give me hot chocolate instead, yes, even in summer. (Although, twist my arm and I’ll take a bite of ice cream, especially if it’s strawberry.)

While I rarely partake, vegan ice cream has brought an important mood boost to our household in 2020. Walking down to the shop has often been our only outing for the week as we shelter and distance learn at home to avoid the pandemic ravaging the planet and our city in particular. I imagine this has been a similar experience for thousands, maybe even millions of people around the world this last year. The little things, right? Whether it’s a neighborhood ice cream shop or the store-bought stuff, we do what we can to stay sane.

Ice Cream As a Vessel for Change

Ben & Jerry’s, which has been steadily increasing its dairy-free options, just added a new vegan flavor to its roster. “Change the Whirled” is a partnership with former San Francisco 49er and social justice advocate, Colin Kaepernick.

“Ben & Jerry’s believes Kaepernick represents the very best of us, willing to use his power and platform in the pursuit of equity and justice rooted in a commitment to love and resistance,” the company said on its website.

A portion of the proceeds will go to Kaepernick’s Know Your Rights Camp. The non-profit teaches minority children how to react during police interactions and works to educate and empower the next generation of change leaders.

It’s a noble cause most certainly. 2020 has seen the worst of humanity from the maskless pandemic “super-spreaders” to the systemic racism prevalent in our law enforcement, to the (ahem) now officially over, election from hell. We could all do with a little bit more sweetness, right? In this case, that’s non-dairy caramel, sunflower butter, fudge chips, graham crackers, and chocolate cookies all swirled together, one pint at a time.

The world is indeed changing, particularly as COVID-19 highlighted the significant link between animal agriculture and pandemics. Leading health and environmental experts have been sounding this alarm for years. Our habits need to change or they will bring about even greater pandemics than what we’ve already endured. Can you imagine something even worse than this past year?

Even before the pandemic, vegan ice cream was more than just a new category; it was a bona fide movement. Sure, a handful of dedicated vegan brands had been active in the space for years. But it was only in the last three or so years that major brands — Haagen Dazs, Baskin-Robbins, Halo Top, Breyers, Magnum, and, of course, Ben & Jerry’s — got in on the action. They all launched dairy-free flavors in a chocolate-coated-domino-on-a-stick type of effect. Even IKEA brought a vegan flavor to its cafes.

This kind of movement has happened in other major animal-dominated categories, too: milk led the way. Butter, cheese, yogurt, and eggs all have legitimate competition from vegan manufacturers, too. But meat is now the space to be for vegan brands. And even major meat giants are bringing vegan options to market. Earlier this month Eat JUST announced regulatory approval in Singapore for its lab-grown meat. That’s meat grown from animal cells without the whole animal — which is now approved for sale in one of Asia’s biggest markets.

Credit the flexitarian boom led by Millennials and Gen-Z. They’re diversifying their protein and dairy just like they rotate through social platforms. Gen-X and even Boomers aren’t to be excluded, either. They’re curiously adding oat milk to lattes and Impossible Whoppers to their drive-thru orders. Most people, it seems, are ready to taste new things, even, and dare I say, especially if they come from plants.

I went vegan in my late teens; my daughter went vegan in utero. As a young adult, I endured the rabbit food and Tofurky jokes at Thanksgiving. I answered the protein question until I was blue in the face. And, perhaps the reason I’ve lost my taste for ice cream is that I spent so many decades without a viable option. Sorbets and sherbets are no match for chocolate chip, after all.

But as we’ve learned this year, is there any better tool to change the way we view food, our relationship to the world and each other than ice cream? If childhood innocence and acceptance were food, it would most certainly be ice cream. Cone or cup. Here, in Kaepernick’s case — tackling social justice issues — is there a better food to help us bond, to tear down our centuries of prejudice and biases? Aren’t we all equal when we’re staring deep into the abyss of frozen, whirled sweetness waiting to offer up our order?

Ice cream brings those wide-eyed dreams that can only come as chocolate and sugar mix with brain freeze. It takes us back to simpler, better times. And for kids today, it brings the promise of a better world than the one they’re living in now. As we master that delicate balance of keeping those tasty scoops stacked atop their cones while we walk home from our local ice cream shop, we all imagine a better world, don’t we?