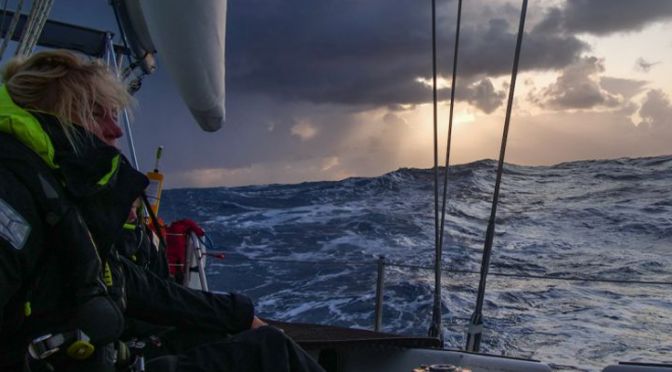 An update from eXXpedition’s Legs 1 to 5

Five legs out of 30 are now complete on eXXpedition’s epic two-year, 38,000 nautical mile journey round the world. This voyage, which will see 300 women take turns sailing the S.V. TravelEdge, is dedicated to the study of plastic pollution in our oceans. And to empowering solutions to stop the problem at its source on land.

We’ve already introduced the mission and the women leading the voyage. But we wanted to bring you a recap of what they’ve been up to since setting sail from Plymouth on 8 October 2019.

There are several types of science that the crew are doing across this voyage:
> They are using manta trawls to collect samples on the surface of the water
> They use Niskin Bottles to sample the water column at a depth of 25 metres
> They use a Van Veen grab to collect sediment from the ocean floor
> They use an FTIR machine to analyse the chemical structure of the plastic and compare it to known polymers on land, helping them chart the potential origin of the plastic and its course to the ocean

In all of these sampling methods, they are looking for plastic pollution, including micro-plastics as the sun and waves break down the original items into smaller and smaller particles.

Leg One: Plymouth to Azores

Amid the festivities and launch events, the crew found time to do some science before slipping out of Plymouth Harbour.

They took part in a Circularity Assessment Protocol (CAP) survey created by Dr Jenna Jambeck at the University of Georgia in the USA. The women break into three teams and cover 100m in different locations. They are logging litter and compostable debris they find via the Marine Debris App in order to identify the type and amount of plastic found in various locations to help pinpoint solutions.

The nine days at sea weren’t all plain sailing as the novice sailors had to contend with driving rain, winds and huge swells. Seasickness wiped out over half of them for days and both the main sail and the mizzen ripped, leading to a sailmaking 101 class complete with sewing kit and hot glue guns.

But when the seas were calm there was ample time for what the women had signed up for in the first instance:
> Getting to know each other through personal stories round the dining table or on night watches with only the stars and the ocean as witness
> Workshops with Emily on the problems of plastic pollution and potential solutions and collaborations when they return to land
> And of course, doing science

In the seven samples the crew were able to get during Leg One, they found around 177 different types of plastic fragments, including a styrofoam takeaway container floating 400km from land.

One of the crew wrote:

‘The plastic we find out here is anonymous and it’s both fascinating and overwhelming when you appreciate the vastness of the sea and wonder, “how did this particular piece of plastic make its way from land to sea?”.’

As Leg One drew to a close in the Azores, the crew hosted public talks and Q&As with the residents as well as lab visits where they could see the plastic samples the crew had collected.

Leg Two: Azores to Antigua via the North Atlantic Gyre

Poor weather meant a delay to Leg Two. But for the new crew, that didn’t mean wasted time. They turned their attention to land-based science.

They performed a CAP survey and spoke with students at the University of Azores as well as with the general public at a new shopping mall. They also participated in a Santa Barbara Beach clean.

In less than an hour, ten women filled three large rubbish sacks with plastic trash and in 30 minutes they’d found 424 nurdles – ‘a very small pellet of plastic, which serves as the raw material in the manufacturing of plastic products’. For reference, you need around 660 pellets to make a plastic bottle.

They also visited the Musami Waste Management facility, San Miguel’s primary centre, which takes in 95% of all municipalities’ trash on the island (approx. 200-250 tonnes per day).

They toured the waste sorting facilities where the rubbish is sorted completely by hand without proper protective gear, the composting fields and the second of two landfills. The first (covering 1 million metres squared) is now closed. The second, at 330 thousand metres squared, is filling up quickly, with rubbish towering 14m above ground.

It was a sobering experience, as one crew member reflected:

‘Just because the trash is out of our sight, doesn’t mean it’s actually gone. We could do much more to reduce our use of plastic.’

This leg also took in the North Atlantic Gyre, one of five gyres around the world where ocean plastic is known to accumulate.

Whilst the sea can look clear from above, the two manta trawls the crew performed collected around 70 pieces of micro plastic each. The vast majority of the plastic is HDPE, high density polyethylene, a common plastic used in construction and packaging for food, drink or personal care products.

Arriving in Antigua, the crew shared their stories travelling through the North Atlantic Gyre with an audience of 100 people at the Club House at Antigua Yacht Club. The event was also attended by the Antiguan Minister of Tourism, the honourable Charles Fernandez, who was also able to discuss the government’s approach to plastic pollution in Antigua.

Instead of heading out for the open sea, the crew onboard the S.V. TravelEdge were there to explore Antigua and collect samples around the coastal areas.

In addition to the normal manta trawls and Niskin bottle sampling, they also took part in a beach clean on Green Island. This resulted in six large bags of rubbish – from fishing lines to plastic containers with teeth marks, to tires and laundry baskets.

For their tips on minimising your impact when you travel, check out their blog.

The crews work wasn’t limited to onboard activities. They met with community leaders like the Governor of Antigua, schools and media to raise awareness of expeditions mission, the challenges Antigua faces and the work they’re doing to reduce their plastic footprint.

Before leaving Antigua, the new crew performed their CAP survey and visited the National Solid Waste Management Authority disposal site. It was ’a glaring juxtaposition between paradise and piles of waste’.

While Antigua was the first country in the Caribbean to ban plastic-bags and single-use plastics, there is still 3.5kg of waste being generated per person per day there. Every effort is being made to ensure the facility is running as environmentally friendly as possible, but there is still leakage from the site running down the hill to the mangroves and the sea.

The crew took part in an underwater cleanup with GoodDive at DiveFriends Bonaire, helping collect data for Project Aware – logging everything from bottle tops to pieces of carpets and clothing to remnants of a shoe heel.

They also held community talks where they shared their personal stories and discussed opportunities for everyone to do their part to stop plastic pollution.

Starting their journey in Aruba, the ten women who joined the S.V. TravelEdge visited the Serilimar Upcycling Centre, the first of its kind in Aruba, where individuals and businesses can bring their used items and re-cycle or up-cycle it into finished products, ie. turning pallets into furniture. It’s a wonderful example of the circular economy in action.

They also captured vital data during their CAP activity to send to the University of Georgia, then were ready to get under sail.

The crew wrote about sailing past a municipal landfill as they left the harbour. Unlined, situated next to the ocean, the landfill receives around 200 tonnes of waste daily from homes, business and cruise ships. They saw the rubbish blowing into the ocean and a fire burning, releasing toxins into the atmosphere. It was another sobering reminder of what unbridled consumption means.

They also visited a school in Kuna Yala to talk to 20 students about plastic pollution and organise a five-minute clean up of the playground. They also helped them assemble Foldscopes – an origami-based microscope that is inexpensive, portable and durable. The crew hope this will spark interest in STEM and kick-start a new generation of citizen-scientists.

As the voyage pauses until the end of January, the fifty women who are now back home are likely processing their experience and clarifying how to use it to inspire action in their communities.

While the scale of the problem is vast, there is also magic they’re taking with them from their time onboard. They all spoke of the joys of living in the moment without technology. Of the small acts of kindness that meant so much and created a spirit of camaraderie, a sisterhood. Dolphins were their frequent companions, playing in the wake of the ship. As was the endless sky full of stars and moonlight to guide them on their way.