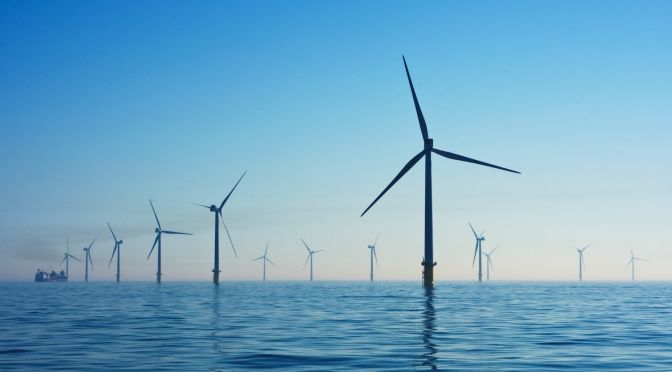 As monikers go, ‘The Man Who Caught the Wind’ is pretty swish.

But Henrik Stiesdal, the father of the modern wind turbine, has earned it. He built his first wind turbine at age 16 and opened the world’s first off-shore wind farm in 1991.

But it certainly wasn’t an easy process.

The early blades weren’t big enough or robust enough to deal with the harsh conditions. And the available manufacturing meant that pieces of the blades had to be glued together.

In an interview in The Engineer, Henrik said:

‘We even had to do a lot of testing to make sure that these things wouldn’t come apart and kill people. So I started thinking, ok, what could we do to make the situation better? I always like to look at radical solutions and the radical solution was, if the problem is with the glue joint, just make a blade they didn’t have glue joints. Make it all in one piece.’

So that’s what he did.

Over the years, the blades of the turbines have become longer to capture more wind. Henrik’s longest blade is now 94 metres long, made from a single piece of fibreglass. And the ocean locations that the wind farms are built on are only getting deeper because you get more wind further from shore.

Henrik is now turning his attention to floating wind turbines with factory-made parts that you can assemble on location.

According to the International Energy Agency (quoted in the video below), ‘Floating wind turbines could unlock the world’s total electricity demand 11 times over by 2040.’

Here’s Henrik Stiesdal featured as one of the BBC’s Climate Defenders:

That potential of wind – paired with solar, biomass and hydro – is already changing the energy landscape here in Britain. In fact, the combined capacity of these renewables has increased sixfold since 2010.

And the good news coming out of a new Drax Electric Insight report by Dr Iain Staffell at the Imperial College London is that the carbon emissions from the UK’s power industry are falling faster than anywhere else in the world.

The report has found that:

In the same period where we saw our population grow by 7% and our GDP rising by a quarter, demand for electricity fell by 13%.

This falling demand accounts for 1/3 of the decline in carbon emissions, reinforcing as the report says, ‘the often-overlooked mantra that efficiency is the ‘first fuel’ that should be considered…Demand reductions genuinely pushed down both prices and environmental impact: a rare win-win.’

Some of this can be chalked up to milder winters, but it’s also because our technology is becoming more energy efficient. And as homeowners take steps to make sure they’re being smart with their energy, that reduction should continue.

In the run up to COP26 this November in Glasgow, we agree with the report that ‘now is the time to show environmental leadership’.