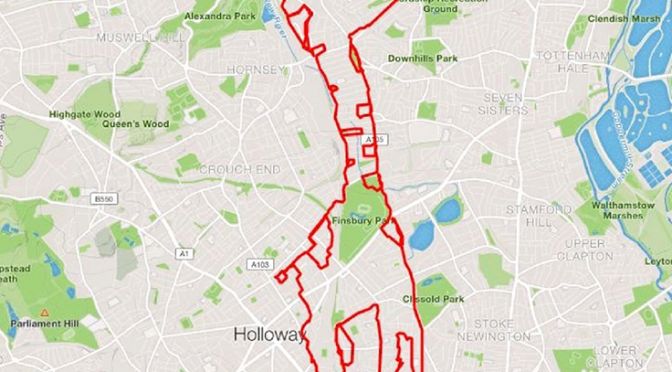 Most people set a fitness goal as the new year kicks off, but Jeric Yuen took his goal to the next level

Look closely…what do you see?

The giraffe is obvious, but what may not be immediately visible is that the outline of the giraffe is marked out on a map of Holloway, in London, near the Emirates Stadium where Arsenal play.

Or played until recently…but let’s not get into all of that right now.

This is an example of Jeric’s #StravaArt, a trend that sees runners mapping our their running route on the STRAVA app in such a way that the result is a recognisable shape or character.

Jeric started his drawings in December 2019 in Glasgow over Christmas and decided for his new year challenge he would create 20 #StravaArt pieces to raise money for Spinal Research, a UK charity that funds ground-breaking research for for spinal cord injuries.

In addition to that, he planned to run two marathons – one in London and one in New York City. Whilst those are postponed, the #StravaArt – paired with TENZING’s Clear Air Tracker – carries on!

Jeric’s other #StravaArt pieces so far include a duck, fish, horse, seahorse, rat (celebrating the Year of the Rat), dog and a chicken.

His latest one over the past weened was a kangaroo in honour of his mum for Mother’s Day. Part of the caption reads ‘Thanks for keeping me safe & warm. Thanks for being there for me. Thanks for hopping through life with me.’

While the story may be different this year as the country goes into lockdown, London’s air quality can be almost as bad as Beijing or New Delhi on some days. In 2019, London exceeded the European and UK air quality limit values for the whole year on the 18th of March…that’s the whole year’s limit in 77 days.

And that’s bad news for runners. Air pollution impacts runners in both urban and suburban areas more than normal pedestrians because they are breathing more heavily and deeper as they run.

That’s the reason why TENZING, a very cool natural energy company, partnered with King’s College London on a Clean Air Tracker, allowing runners to sync with their STRAVA app to show the air quality score of their running routes. Runners can also search for ‘clean’ runs in each of the London boroughs.

‘We started TENZING Natural Energy, to offer people a natural alternative in a market dominated by synthetic energy drinks. What applies to the food and drinks we consume, also applies for the air we breathe.

As keen runners ourselves, we were shocked to find out the appalling air quality we run in in London. Now with our new tech based on King’s College’s data, we can help find runners the cleanest
air routes to go for a run.’

We love the story behind TENZING, a 100% plant-based, natural energy drink that re-invests 5% of its profits into environmental projects.

‘Inspired by the naturally energising brews of Himalayan Sherpas, we travelled to Nepal to find out more. On our travels, we met the Tenzing family, and heard more about Sherpa Tenzing Norgay, one of the first two men to summit Everest.

Hearing about Tenzing’s adventurous spirit, closeness to nature, and burning desire to push the boundaries of human achievement, we wanted to honour him in anyway possible and have him as our guiding spirit. We’re proud to work with the family closely to this day, and that our drink carries his name.’

So if you’re looking for something creative to do with your one allocated outing per day for exercise, why not follow Jeric’s example and start your own #StravaArt.