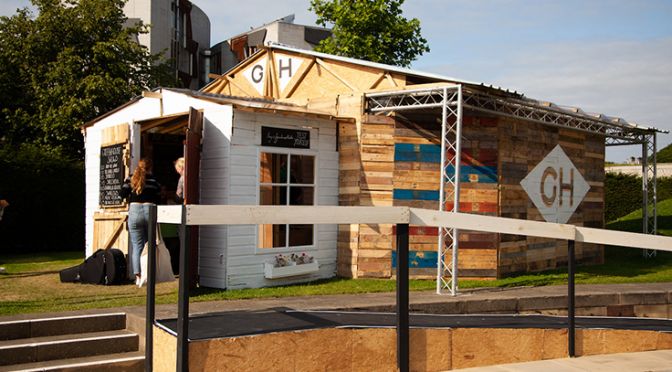 Climate Change at the Fringe

‘The most important thing for us is that we always try to approach the work in a holistic way.’

Oli Savage is the Artistic Director for BoxedIn Theatre. Two years ago, he started thinking about a show centred around sustainability that he wanted to put on at the Edinburgh Festival Fringe.

But for Savage and the rest of the BoxedIn team – 33 people in total all under the age of 24 – they knew it had to be about more than one show.

‘It’s not enough to just put on a show about climate change. It’s important to implement the ideas we’re discussing in our shows through our organisational practices. That’s what makes our projects really valuable. We’re saying “Here is a message, here is something we need to talk about”. And also, “Here is a way that this can be done”.’

But was it easier said than done?

Sustainability isn’t the first thing you would think of when it comes to theatre. You have the physical location with the lighting and sound requirements. You have the cast and crew, costumes and props. Then there is the marketing to consider – Savage estimates 3.5 million flyers alone are printed to market the shows at the Fringe.

The challenges were real, but the BoxedIn team weren’t put off.

‘The hardest part of the whole project was the moment when we made the decision to do it. The choice was the scary bit, the tough bit. Once we got over that hurdle, everything fell into place.

I’ve always thought that the best way to learn if something is a success or a failure is to try it.’

The result was The Greenhouse, a purpose-built performing art space made entirely from found or recycled material.

The foyer is made from an old shed that someone was getting rid of. The frame and doors of the building were made from pallet wood reclaimed from a lumber yard that was shutting down. And the roof is framed with untreated pine and lined with corrugated clear perspex.

‘The roof is my favourite part. When you step into the space, your eyes are immediately drawn upward to the sky – the largest natural thing there is in the world.’

There’s also no mains electricity, so the shows are naturally lit by the sun. And the shows change depending on the weather. Rain makes things cosy or loud depending on the strength of the storm, while the burning sunlight adds an intense element.

‘A lot of theatres are experimenting with lighting technology. We’re lucky that the lighting we get to experiment with is the sun!’

The unique materials and the intimate nature of the space were intentionally designed to show the interaction between what’s happening inside and what’s going on in the natural world. But they have also had an impact on the way the work is produced and received by the audience.

The fact that the small performance space is naturally lit means that the shared space and shared lighting removes the traditional barrier between performers and audience members. Regardless of the format of the show, the audience feels drawn into it in a more real way.

Savage credits this format with creating a sense of equality. By removing that barrier between the artists and audience, they are tapping into the immediacy and human connection that is an essential element of theatre.

It is simply one human being standing in front of another human being, inviting them into a discussion.

And this is perhaps the most surprising outcome for Savage and his team. The Greenhouse has become a safe space to talk about ideas, emotions and feelings around climate change.

‘That space for discussion is incredibly important when it comes to climate change. Because one of the toughest issues we face around this topic is guilt. People feeling like they’re being attacked or feeling guilty for choices they’ve made in their lives when they weren’t necessarily aware of the environmental impact those decisions would have.’

It’s clear that the artists and venues putting on shows about climate change at the Fringe aren’t trying to tell people what to think or do in their own lives. But what Savage wants the audience to leave with is a simple question.

‘The question we want people to ask themselves is “What can I do?”. I think that question is often framed in a negative light. With so much negative coverage, people may think of that like “What can I do in the face of overwhelming odds?”

What we’re trying to do is challenge that idea and send them home thinking, “What are the practical changes I can make in my life?”.’

It’s that willingness to experiment and take one small step at a time that can make a difference. Savage sums up the company mindset as ‘Don’t just say, do.’ It’s easy to get stuck talking about these ideas without taking action, but it’s becoming clear that time is what we are running out of.

BoxedIn Theatre are doing their part with The Greenhouse.

‘What we’re trying to do with the project is demonstrate that it is not just possible, but easy to do this work in a more sustainable and environmentally friendly way. If we can all start to make these choices together, we can make the planet a little bit healthier.’

The Greenhouse is putting on a daily programme of shows through the 26th of August. They’re also holding a feedback session with other artists, venue managers and audience members to talk about what’s gone well and how they can help make the Fringe more sustainable.

Are you at the Fringe this week? If you have time to visit The Greenhouse, we’d love to see your shots. Be sure to tag us on social.