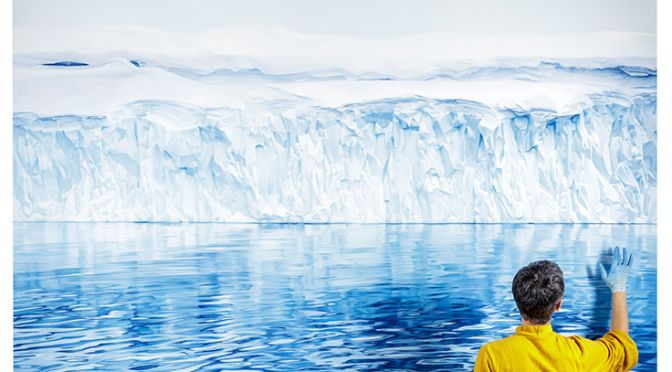 Zaria Forman has been drawing ever since she was old enough to hold a crayon, her first choice of medium not too dissimilar to her current one of pastel crayons.

Her mother, Rena Bass Forman, was a fine art photographer who traveled the world in search of the perfect photograph, tinged in sepia tones or in striking black and white. Zaria and the rest of the family often accompanied Rena on her trips, to diverse destinations like Iceland, Greenland, Patagonia, India and the Norwegian Archipelago of Svalbard.

‘My mother dedicated her life to photographing the most remote regions of the Earth. The cold and isolated landscape of the Arctic consumed her interest from 2001 until her passing in 2011.

She always said that she was a polar bear in a past life, and watching her spend endless hours in the frigid winds, patiently and happily waiting for the moment when the light was right, gave me no doubt that this was true!’

Rena’s photographs captured the beauty and majesty of nature, her work ‘imbued with the timeless atmosphere of diverse and endangered landscapes’. You can see echoes of Rena’s aesthetic in Zaria’s large-scale drawings. And she continues to be a presence in Zaria’s work, even in her absence.

‘She taught me the importance of loving what you do and carrying out projects full force, no matter what obstacles lay in the way.’

Diagnosed with a brain tumour on Mother’s Day in 2011, Rena succumbed to cancer within six months.

She and Zaria had been planning a trip in 2012, following in the footsteps of the American painter William Bradford’s 1869 expedition to Greenland. Her commitment to the expedition never wavered and Zaria promised to carry out the journey. She scattered her mother’s ashes amongst the melting ice of Greenland.

‘Fulfilling my mother’s dream to follow Bradford’s voyage in Greenland was one of the most meaningful gifts my mother gave me. Her sickness and passing was by far the most challenging experience of my life. I had never before faced such a tremendous loss.

The mourning process I went through (and continue to go through) shaped and paralleled the concept of the trip to Greenland, which in turn had significant effects on my art. I often thumb through my mother’s negatives and contact sheets from the trips we took together, to find inspiration for my drawings.

Above all though, her dedication, passion and perseverance continue to inspire me.’

Zaria continues to travel the world in pursuit of her own art now, from the poles to the Equator, from Israel to Costa Rica to Hawaii.

‘My process begins with traveling to the places at the forefront of climate change. On-site, I take thousands of photographs. Back in the studio, I work from both my memory of the experience and the photographs to create very large-scale compositions, sometimes over 10 feet wide.

I draw with soft pastel, which is dry like charcoal, but colours. I consider my work drawings, but others call them painting.

‘Drawing is a form of meditation for me. It quiets my mind. I don’t perceive what I’m drawing as ice or water. Instead, the image is stripped down to its most basic form of colour and shape.

Once the piece is complete I can finally experience the composition as a whole, as an iceberg floating though glassy water, or a wave cresting with foam.’

And the landscapes she captures are precious precisely because they are in flux: fragments of glaciers, the melting of polar ice, the rising of sea levels.

‘It is my life’s mission to convey the urgency of climate change through art.

My drawings explore moments of transition, turbulence and tranquility in the landscape, allowing viewers to connect with places they may never be able to visit.’

Zaria spent the month of September in 2013 in the Maldives, ‘the lowest and flattest country in the world, collecting images and inspiration to create a body of work celebrating and representing a nation that could be entirely underwater within this century.’

‘I hope my drawings will raise awareness and invite viewers to share the urgency of the Maldivians’ predicament in a productive and hopeful way. I believe art can facilitate a deeper understanding of crises, helping us find meaning and optimism amidst shifting landscapes.’

In 2015, Zaria spent four weeks aboard the National Geographic Explorer and had a profound encounter with nature.

‘I had the opportunity to experience something few people ever do: the ethereal majesty of Antarctica. Although I have traveled over the planet from Greenland’s ice sheet to the Sahara Desert, Antarctica was unlike anything I had ever seen. The towering ice radiated a sapphire blue that took my breath away.’

While there, they visited Whale Bay on the western side of the Antarctic peninsula, ‘where icebergs calved from a nearby glacier are carried on wind and water to their final resting place. Since the bay is shallow, the icebergs scrape against the sea floor and become ‘grounded’, meaning they remain there until they have completely melted – a slow process that can take years. Bays that enclose grounded icebergs like these are called ‘iceberg graveyards’, capturing the eerie solemnity of the sight. Over time, the wind and water, like artists’ hands, sculpt the icebergs into unimaginable shapes.’

Another once-in-a-lifetime event was the invitation by NASA to join their Operation IceBridge to fly over Antarctica, Greenland and Arctic Canada as they mapped the geometry and thickness of the ice. Zaria flew on several 12-hour flights at 1,500 feet above glaciers, sea ice and mountaintops.

‘I was able to witness an entirely new perspective of the ice, and in most cases, one that no artist had ever seen before.’

The flights, first launched in 2009, ended last year, ‘the end of an era for airborne observations that has catalogued an Arctic that has experienced rapid change – from the rapid thinning of many Greenland ocean-terminating outlet glaciers to the continued decline of the Arctic sea ice pack in extent, snow cover and thickness’. The work continues from space with the launch of the ICESat-2 satellite.

‘Artists play a critical role in communicating climate change, which is, I think, the most important challenge we face as a global community. I have dedicated my career to translating and illuminating scientists’ warnings and statistics into an accessible medium that people can connect with, on a level that is perhaps deeper than scientific facts can penetrate.

Neuroscience tells us that humans take action and make decisions based on emotion above all else. Studies have shown that art – in particular drawings, paintings, photographs and film – can impact viewers’ emotions more effectively than an essay or newspaper article.

I choose to convey the beauty, as opposed to the devastation, of threatened places. If people can experience the sublimity of these landscapes, perhaps they will be inspired to protect and preserve them.’