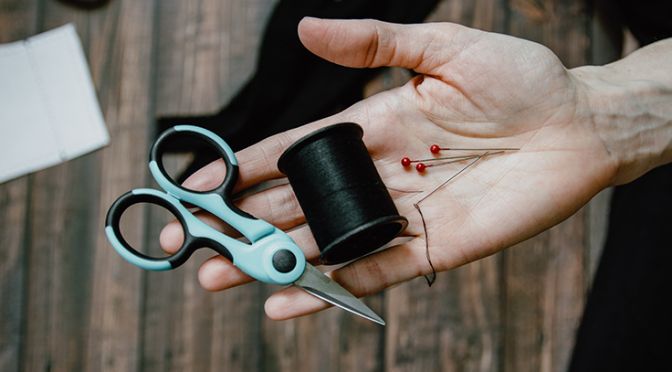 ‘Make Do and Mend’: The Post-War Ethos Was Eco-Friendly Long Before It Was Cool

The previously embarrassing mentality of our elders has now become our new eco-goal.

Even if it weren’t for the fact that my eyes ache from rolling in their sockets, I can always tell when my mother has been here for a birthday or Christmas: all of the wrapping paper will have been unobtrusively put to one side, cut down to remove ragged edges, folded neatly and squirreled away in the cupboard. She has always done this: gift wrap that concealed a toy keyboard when I was six made a reappearance when I was sixteen – except that, by then, it was only big enough to wrap a jeweller’s box.

Similarly, paper napkins from takeaway bags are found stowed away in my glovebox for nose-blowing emergencies, and there’s not a single almost-empty jar or bottle left in my fridge: the scrapings of the mustard have been mixed into mash, and the skerricks of ketchup have been shaken loose from the sides of the bottle with stock to add into a casserole.

Growing up, I found my mother’s ‘waste not, want not,’ mentality agonisingly embarrassing: it smacked, to me, of poverty. We weren’t poor, but many of my peers were from far more affluent backgrounds, and I cringed to think of them ever seeing my mum clipping together torn-open envelopes to make telephone message pads; even worse was the thought of them seeing her blend slivers of leftover soap into a miniature bar, darning my dad’s socks, or cutting down old and worn sheets to stitch pillowcases.

‘Make Do and Mend’

‘I was eco-friendly before “eco-friendly” was even a word,’ she proclaims proudly these days.

And it’s true. Much of what she was doing – and much of what, despite my reluctance, she instilled by osmosis into me – was driven less by concerns for, or even awareness of the environment, but simply by that post-war ‘make do and mend’ mentality. In the excessive ’80s it was embarrassing; in the hyper-conscious present day, it’s practically a halo. I see your reusable shopping bag and I raise you … a Christmas nativity crafted from toilet rolls (true story!).

By the same token, there is now such an awareness around ‘vintage’ or second-hand clothing that the terms have a huge number of followers on social media and a slew of associated hashtags. And rightly so – as the world of fast fashion has bloomed, hot on its heels has come the recognition of its impact on the environment and the people involved in making it.

For me, however, the sense of joy that I get when I unearth a gem long predates this trending moment and can be attributed directly to trawling around charity shops with my mother.

Everything Old Is New Again

Although the genuine reason was that we couldn’t afford most fashion-store clothing, she would cannily package it to me as ‘everybody looks the same – why not be an individual?!’ I became adept at ferreting out the pieces that gave a nod to current trends and, although I never quite managed to sew and customise my finds like Molly Ringwald in the 1986 John Hughes classic ‘Pretty in Pink,’ I did develop a certain fashion mentality for which I’m now very grateful.

That’s not to say that, in my early twenties, and in control of my own finances, I didn’t absolutely revel in shopping sprees and boutique splurges – but within a few years, I found myself gravitating back towards charity shops – if only for the thrill of the find.

And years later, some of those extravagant items I bought are still going strong – a Boho skirt by a local designer that I bought at the age of 20 still makes an appearance each summer. Equally, some of my second-hand finds are still worn, like the embroidered jacket that I agonised over because, at $30, it was going to make quite a dent in my student beer budget. It’s brought me years of happiness and compliments: something that beer probably would not be able to lay claim to!

Parents are kind of mortifying in many ways – but that catch-cry of ‘you’ll understand when you’re a parent!’ does not, in fact, apply only to those who become parents. It’s enough simply to become a little bit more aware – and to see that the wisdom of previous generations may have more relevance than ever to ours.

At the same time, there’s also the joy of teaching your elders a thing or two. Recently, as my mother sat patiently unravelling an old jumper to re-knit into a blanket, while a banana bread, made from past-their-best bananas scented the house, it was with no small amount of smug glee that I told her to steep the skins in water before composting: it makes a potassium rich tonic, which the houseplants absolutely love.