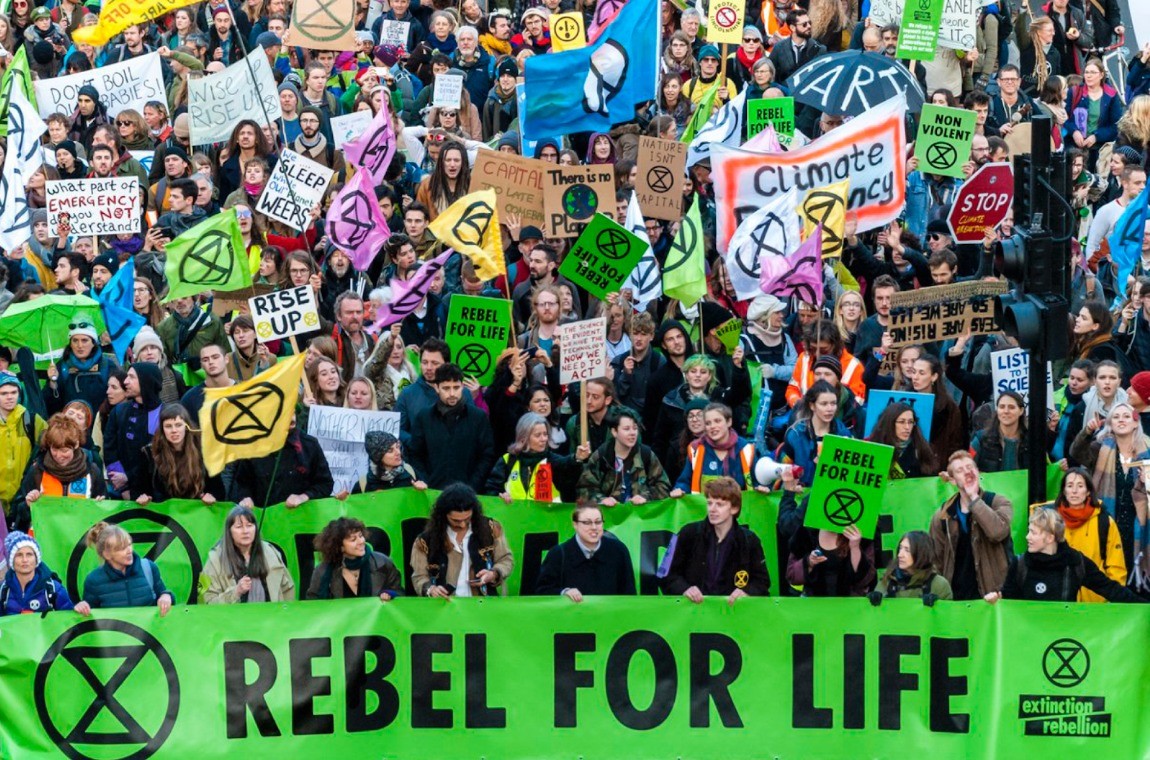 Extinction Rebellion: Who Are They and What Do They Want?

From supergluing themselves to the gates of Buckingham Palace to pouring fake blood over New York’s Charging Bull statue, Extinction Rebellion protestors have been bringing attention to the world’s climate emergency for the past 3 years.

Now, 6 Extinction Rebellion activists have been arrested after dumping manure outside the Daily Mail offices. Why? To send a message to “four billionaire owners of 68% of the UK’s print media.” But what is this global group – with activists of all ages, nationalities, and political, social, and cultural backgrounds – all about?

What Is Extinction Rebellion?

Extinction Rebellion (XR) is an international movement of climate-concerned activists. They have resorted to using non-violent civil disobedience as a tool to “halt mass extinction and minimise the risk of social collapse.”

Hugely concerned that the world’s resources are being depleted faster than they can be replenished by human activity, XR wants governments to declare a “climate and ecological emergency.” Its hourglass logo represents time running out. The group is calling for immediate and drastic action to halt the current climate deterioration before it’s too late.

What Does Extinction Rebellion Want?

The climate champions have 3 main demands:

The group insists that national leaderships must “tell the truth” about the realities and repercussions of climate degradation to its citizens by declaring an ecological emergency. Plus, governments must work with other institutions to communicate the urgency for drastic measures and implementation of new, harder-hitting policies. Referencing Gandhi’s “truth-force” in the XR mission statement, the group believes that, “People are not stupid: people feel a pervasive uneasiness at the extremes of weather, the floods, droughts and hurricanes, but they have the legal and moral right to be fully informed of the speed and scale of the crisis.” Or, as XR co-founder Dr Gail Bradbrook bluntly says, “Let’s have people decide what matters most to them, is it the health and safety and the ability to feed their own kids or does it matter to them that they carry on having holidays and meat?”

XR insists that governments worldwide must act now to halt biodiversity decimation and reduce C02 emissions to net-zero by 2025. In particular, the UK government should create legally binding legislation to achieve this. This would involve severe reductions in air travel, and meat and dairy consumption, as well as a huge increase in renewable energy. According to Zero Carbon Britain, to get the country to net-zero by 2030 would require 130 gigawatts of electricity from wind, meaning around 13,000 extra wind turbines offshore, an area double the size of Wales. However, XR insists that without this kind of response, “We face floods, wildfires, extreme weather, crop failure, mass displacement and the breakdown of society. The time for denial is over. It is time to act.” Bradbrook continues, ”We have left it so late that we have to step up in a semi-miraculous way to deal with this situation.”

Rather than allowing conventional political systems to create and affect policy, XR wants to establish a Citizens’ Assembly on climate and ecological justice. The members would be randomly selected but representative of society in terms of age, ethnicity, and background. Assembly members would get information from experts, then draft and vote on recommendations, in this way empowering citizens to actually work together and take responsibility. XR cites success stories from Canada, Australia, Belgium, and particularly Ireland. Recently, Ireland’s Citizens’ Assembly resolved two controversial issues – same-sex marriage and abortion – and its recommendations on climate change have been actioned by the Irish government.

How Does Extinction Rebellion Work?

With over 298,000 Facebook followers and a global web of small, autonomous groups in over 20 countries (including Spain, South Africa, and the Solomon Islands),  XR promotes highly public but non-violent civil disobedience. Believing that voting, lobbying, and petitions are blocked by prevailing political and economic interests, the key aim is to create economic disruption which in turn will raise awareness and cause the necessary political change.

The success of its first protest at London’s Parliament Square in 2018 – 200 protesters were expected, 1500 came – gave rise to more major “rebellions” over the past two years to bring attention to the plight of the planet and get the government to act accordingly.

Peaceful protests include 6000 activists blocking five major London bridges and bringing traffic to a standstill, planting trees in Parliament Square, mass “die-ins” and blockading fossil fuel companies (such as Shell Oil) and rightwing newspapers’ printing presses. Some activists have glued themselves to trains and the London Stock Exchange, whilst others have targeted Heathrow Airport . The “Rebellion of One” campaign saw over 200 rebels come out onto the streets to take part in single-person roadblocks. Outside of the UK, XR supporters have halted traffic in New York, chained themselves to the Chancellery in Berlin, and blocked a bridge in Paris.

More than 3400 protestors have been arrested, and approximately 1700 charged. The strategy is simple: overwhelm the legal system, and win support for change.

The group is conscious that the civil disobedience approach risks alienating potential supporters as much as it does raise awareness. However, the group stresses that anyone angered by its protests should “find out more about the severity of the ecological and climate crisis”.