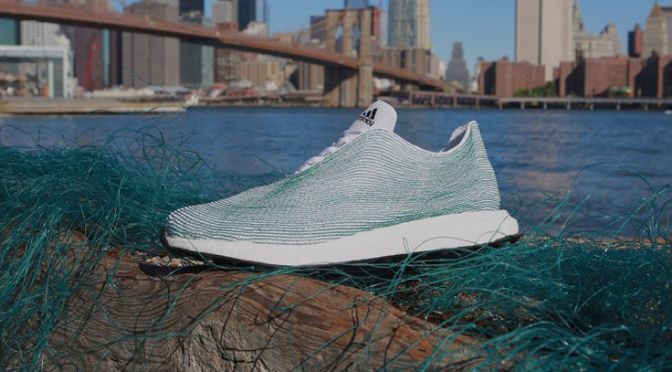 As the world’s attention turns to the catwalks of New York, London, Paris and Milan, we’re celebrating two brands that are taking steps toward a more sustainable fashion industry.

adidas x Parley for the Oceans

Parley for the Oceans is a collaboration network. It’s a space where people from all backgrounds and disciplines come together to raise awareness on problems facing the planet. Problems like plastic pollution in the oceans.

And then, those people create innovative solutions that scale.

adidas is a founding member of Parley for the Oceans. Their first concept shoe launched at the United Nations in 2015. Made from reclaimed and recycled marine plastic waste, that concept shoe has now evolved into a full range of shoes, clothes and sportswear made with Ocean Plastic.

adidas makes Ocean Plastic in four steps:
> Plastic is collected from coastal areas around the world and sorted
> Usable plastic is crushed, washed and dehydrated into plastic flakes
> The flakes are then heated, dried and cooled into small resin pellets
> The pellets are melted to create a filament spun into polyester yarn

The Ocean Plastic has been used in clothes for college football, baseball, hockey, the Australian Open and more.  In fact, 40% of the company’s apparel already uses recycled polyester.

‘Through our collaboration with Parley, we want to inspire and mobilise an entire generation to help shape the future of the planet.’
-Eric Liedtke, Executive Board Member Global Brands, adidas

‘The adidas x Parley collection is an example of AIR in practice. It not only helps avoid the use of virgin plastics, it also intercepts plastic that could otherwise be polluting the oceans. It also redesigns our thinking towards plastic—as both trash and material—and finds unexpected ways to use it to help protect the oceans.’

The company expects to make 11 million pairs of shoes with recycled ocean plastic in 2019, double what they made in 2018. And their goal is to replace all their virgin polyester with recycled polyester by 2024.

‘The more time that goes by, the more reports from the scientists are clear – the planet has gone too far.’
-Marco Bizzarri, Gucci chief executive

As part of their partnership with the UN’s Redd+, Gucci committed to go carbon neutral to tackle climate change and greenhouse gas emissions.

The company will be looking at the entire business, from the supply chain through to their fashion shows and into their shops.

REDD+ is the UN’s initiative to reduce greenhouse gas emissions from deforestation and degradation. It prioritises ‘conservation, sustainable management of forests and enhancement of forest carbon stocks.’

The initiative incentivises developing countries to keep their forests in place. Payments are made to countries demonstrating that they are reducing or removing forest carbon emissions.

Gucci acknowledges that the early supply chain currently accounts for 90% of its greenhouse gas emissions.

‘More and more, we just need to act. We are not perfect and it’s not a matter of saying we are the best, it’s a matter of showing it can be done, and hopefully others will follow this path.’
-Marco Bizzarri, Gucci chief executive

‘For its spring/summer 2020 show, due to take place in Milan next week, Gucci will offset its guests’ carbon footprint and the set of the show will be reused in its shops.’