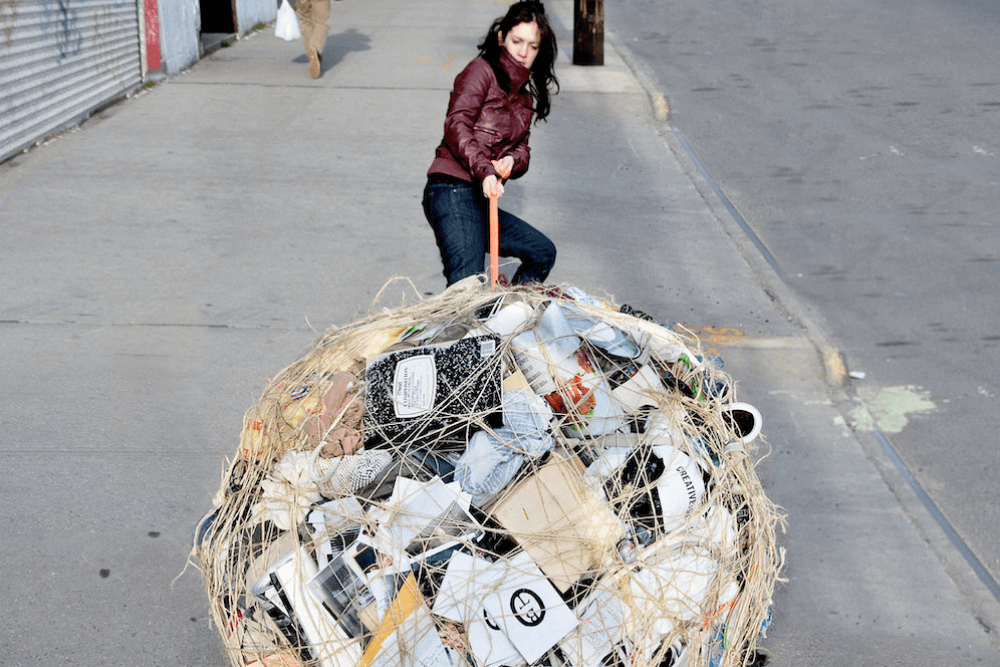 9 Female Artists Using Their Platforms for Social and Environmental Justice

It’s not just activists who are fighting for social and environmental justice. Female artists are using their creativity to educate, empower, and inspire positive change.

Communicating complex issues to the public – such as climate change and racial inequality – can be challenging. However, art – whether paintings, photos, sculpture, or video – can help explore ideas and evoke emotions that catalyse change. For too long the art-world had been male-dominated. Now, in 2021, women artists are playing a vital role in furthering feminist causes through their work.

These artists highlight the complexities of being a woman, challenge stereotypes, and help support the fight for a greener and more equitable planet for all.

Up and coming illustrator Sravya Attaluri creates her graphic drawings as a form of mental health and feminist activism. As a brown-skinned woman, Sravya grew up not understanding why she didn’t see people like her reflected in art and books. She got proactive and now draws BIPOC women as part of her mission to uplift and represent. As someone who has suffered from anxiety, grief and body dysmorphia, art has become an important channel for self-care and self-expression. In fact, she is currently working with The Priory to inspire people to see the benefits of art therapy and the role it can play in mental wellbeing. Her work champions body confidence, diversity and inclusion and, unsurprisingly, has been used by UN-backed and human rights organisations, mental health charities, movements to end public sexual harassment in the UK and more.

When Interview Magazine asked ecological artist Agnes Denes whether her concerns about the environment had changed since the ’60s, she responded, “No. It’s just that some of the things I talked about 40 years ago have become reality.” A pioneer in conceptual, environmental, and ecological art, Denes’ has been warning us about our damage to the planet for over 50 years. However, her work aims to analyse, document, and ultimately aid humanity’s relationship with the earth. “Rice/Tree/Burial” is considered to be the first work of the Land Art movement in 1968. The piece involved planting rice seeds in a field, chaining surrounding trees and burying a time capsule. “It was about communication with the earth,” Denes explains on her website, “and communicating with the future.”

Mary Mattingly is a hugely diverse artist, ranging from photography and sculpture to performance and installation. Her work looks at how politics impact the environment. For instance, 2018’s “What Happens After” dis-assembled a military vehicle to trace the mineral elements back to their exploitative mining practices. Her most recent project, 2020’s “The Ecotopian Library” asks for global contributions to a collective toolkit for a climate-changed world. Mattingly’s signature work is “Swale,” a floating barge with vegetable garden in New York. The public were invited to pick their own produce, in order to connect with local ecology. The project was so successful that the New York City Parks commissioner opened its own public edible garden in the Bronx. This was the first time New Yorkers were legally allowed to publicly forage in almost 100 years.

Manal AlDowayan’s work springs from her lived experience as a woman in Saudi Arabia. From photos of Saudi Arabia’s female workforce, to a frozen flock of birds imprinted with the permission slip Saudi women require to travel, she attempts to illustrate invisibility and the Saudi state representation of women. “Crash” documented media silence on fatal road accidents involving commuting women schoolteachers. Recognized for her work in sound, neon, and sculpture, in 2018, the British Museum placed two of her artworks on long-term display. Featured on the BBC 100 Women 2019, AlDowayan explains, “Every day I am confronted with the incredible brilliance and courage of women around me, and I can only see a better future when these women have their place in society and history.”

Nadine Kaadan is an award-winning children’s book illustrator from Syria who wants every child to see themselves in a story. Now living in London, her experience of conflict growing up led her to champion empowerment and inclusive representation in children’s books. After working with young refugees, she created picture books “Tomorrow” and “The Jasmine Sneeze” to help others process their trauma. These have been published in several countries and languages. The 2019 winner of the Arab British Centre Award for Culture, Kaadan also featured on the BBC 100 Women 2020 list, “Whether it’s conflict or Covid-19, women continue to be peacemakers and leaders. Despite that, systemic structures seem to be designed against us. The struggle to redesign them, so that women can be fuller expressions of themselves, must continue.”

A visual artist working in sculpture, installation, and photography, Allison Janae Hamilton’s work is informed by the American landscape. Born in Kentucky, raised in Florida, and living on a Tennessee farm, she often uses plant matter, and animal remains, to comment on humans relationship with their environment and to illustrate social and racial inequality. She makes it clear that when it comes to natural disaster, people of color are the hardest hit. “The peo-ple cried mer-cy in the storm” (2018) is a memorial to the thousands of black migrant workers killed and buried in unmarked mass graves due to hurricanes in the 20s. Speaking to Artnet in 2019, she explained, “It’s really important to look at who the most vulnerable people are, and as natural disasters like hurricanes and other occurrences grow more and more intense, to ask,’How are they illuminating and shedding light on the already existing social disasters?’”

For over 50 years, artist, activist and children’s author Faith Ringgold has challenged perceptions of African American identity and gender inequality. Born and brought up in New York, Ringgold was a key player in “Harlem Renaissance” alongside writers James Baldwin and Amiri Baraka. Her “American People” series exposed the racial tension she witnessed during the ’60s Civil Rights era, and culminates in her response to the Black Power movement. In the 1970s, her work focussed on feminism as she led protests outside New York museums demanding equal gender and racial representation in exhibitions. The ’80s saw Ringgold’s first story quilts, for which she is best known. Combining personal narrative, history and politics, she used these “to tell my story, or, more to the point, my side of the story,” as an African American woman. From Harlem jazz clubs, to a New York subway, and the face of pancake mix brand “Aunt Jemima”, Ringgold’s quilts celebrate Black life and culture.

New York-based Zaria Forman travels to the ends of the earth to create photograph-like pastel drawings of icebergs and tropical waters to raise awareness of global warming and sea-level rises. She has flown with NASA on several Operation IceBridge missions over Antarctica, Greenland, and Arctic Canada. Plus, she was the artist-in-residence aboard the National Geographic Explorer in Antarctica. Whether depicting glaciers, bodies of water or storm fronts, her work focuses on the problems we face in terms of water conservation. “Chasing the Light” documented the climate changes in arctic Greenland whilst “Maldives” focusses on a nation that could be underwater within this century. As well as appearing in The New York Times, The Wall Street Journal, and the Smithsonian Magazine. Forman’s work has graced the walls of Claire Underwood’s (Robin Wright) office in Netflix’s TV show “House of Cards.”

Caroline Walker documents the “invisible women“ we see but don’t “see” every day. Inspiration came from collaborating with charity “Women for Refugee Women” to make a series of paintings documenting female asylum seekers in London. “Making these works really opened my eyes to the idea of invisibility, of those overlooked lives in the city around us and about who occupies what spaces and at what times,” Caroline explains to Artnet. “This led to me becoming interested in women working in service industry jobs, particularly retail, hospitality, and cleaning, often professions dominated by a female labour force, but which are largely taken for granted or, in the case of hotel housekeeping, designed to be unseen.” Caroline’s intimate paintings are a testament to these women, reinstating their value through paint making them the focus of the artwork.

Find out more about female activists who are changing the world here.