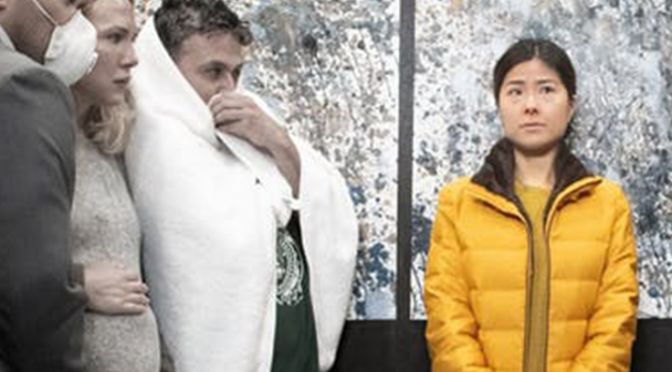 How the movie industry is fighting lockdown

It’s a tough time for the global film industry, for which the pandemic represents a disruption of seismic proportions. All movie production spaces have been officially ‘locked down’ and all talent – whether in front of or behind the camera – has been quarantined. Film festivals have all been cancelled or moved online and cinemas are closed and the industry faces an uncertain economic future.

Yet it hasn’t taken some movie makers long to adjust. We’re already hearing of films whose storylines revolve around the coronavirus pandemic. Corona is the first feature film on the topic – a low-budget, single-camera film shot in one take inside a broken down elevator.

Another film now in production is likely to be of considerable significance. Songbird is set two years in a future where the pandemic is ongoing and lockdowns are still in place. All major studios will be watching this production as it will be the first to deploy new health and safety protocols in all elements of the production process.

Beyond these productions, we’re seeing other green shoots starting to appear. There are plans to restart halted films such as Avatar 2 and, at the same time, studios are starting to prepare for new socially distanced productions. The Pinewood Atlanta Studios have reportedly already invested $1 million (£810,000) in safety and security measures to reduce the risk of infection for everyone working there.

This is all very well for the big Hollywood outfits, but what about smaller studios and independent productions?

So how will the movie industry adapt? The challenges that face the industry should not be underestimated. Film studios and locations sets are spaces filled with people and frenetic activity. Crew and performers tend to work in close proximity and in frequent close physical contact – think of make-up, hair and costume departments and all the equipment that is routinely handled and passed between crew members.

Although it was published just days before the current UK lockdown, and written in a pre-COVID world, the Future of Film report offers some useful thoughts on how to address the current challenges using innovative ‘virtual techniques’.

The report sets out a vision of the future of film that is ‘inclusive, sustainable and rewards innovation and creativity’. But its argument that virtual production techniques are key to achieving this aim is highly prescient.

The findings of the report provide a vivid template for the industry to respond to the extraordinary challenges posed by the pandemic. As we write, it looks as if all film productions stalled by the pandemic will have to engage in virtual production techniques if they want to get made entirely under social distancing measures.

Since digital technologies were introduced into film production, one of their primary benefits has been to make economic savings such as reducing the need for expensive international travel. So, for example, ‘automatic dialogue replacement’ is one of the final post-production processes where actors can record replacement dialogue remotely in one studio which can be dubbed over the live action footage in another.

Such virtual post-production solutions are now set to be integrated into all aspects of production, from the initial planning and scripting stages. A process known as ‘pre-viz’ – the pre-visualation of a film’s narrative world so that a director can make creative choices and producers logistical plans – has already radically altered the traditional film production cycle that has been in place since the birth of cinema. It means that post-production processes start at the beginning of the creative cycle as opposed to being at the end and some films can now be made entirely in pre-visualised virtual environments.

Take the recent Lion King remake, for example, which was made using an entirely virtual set. A virtual set enables a range of creative production personnel, including directors and performers, to see the composition of photorealistic computer-animated imagery on screens around them. Actors are able to perform live within the digital environment.

In the Oscar-winning film Gravity, the only real live action were the faces of the principle actors – everything else was computer generated. Virtual production also means that the production team don’t have to be in the same physical space. Creative teams can continue to collaborate despite being in different places.

This is all made possible using computer game technology, in particular ‘realtime game engines‘ such as Unity and Unreal Engine, which enable the real-time generation of graphics and visual effects. These are routinely used in big-budget special effects productions such as Solo: A Star Wars Story, but also enable independent filmmakers to create films entirely in game environments. Live action is completely eradicated and replaced by simulated versions of the real world. Neill Blomkamp’s acclaimed Adam 1 and Adam 2 were made entirely in Unreal Engine.

There are some early indicators that these are the types of films that might characterise the post-coronavirus filmscape. There may also be a proliferation of what are becoming known as ‘screenlife‘ films where all filming takes place through social media accounts and webcams. Examples include Unfriended and Profile.

There is fevered debate about how the film industry will emerge from this crisis in terms of new business models, aesthetic practices and technical infrastructures. What is certain is that these virtual production technologies that were largely seen as emerging and somewhat niche future opportunities have become the new creative and economic necessities.