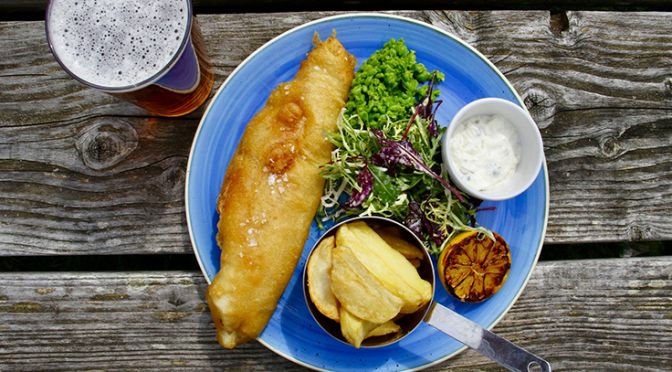 Fish and Chips, Hold the Guilt…

As an American living in England, I had to go through an education when it comes to fish and chips.

I was never a big seafood eater back in the States, but this iconic dish was a staple in my British husband’s repertoire. A Friday night takeaway from the chippy became standard practice.

Leaving aside the potatoes for the moment (which could be another article in its own right), we’ll look at the fish. My husband prefers cod, while I’m happy with haddock. We never swap. The batter is incredibly important – it needs to be light and crispy, but not too greasy. And context matters.

Fish and chips really do taste best at the seaside. My favourite locations are the Brighton Pier (battling off the muscular seagulls) and on the northeast coast at Filey after a long walk. Even better if it’s accompanied by a refreshing ale.

But over the past year, I’ve developed real reservations about eating fish.

Short on time? Here are the key takeaways:
There are too many people in the world, and that number is just going up. There is not enough food in the world to feed the growing population, certainly not enough fish. So what we need are innovators to come in and save the day.

Still with me? Let’s unpack that in more detail…

Why is fish so important?

The challenge facing food producers today is that the global population is rising from 7 billion in 2010 to almost 10 billion in 2050, and the question of how we’re going to feed the world in a sustainable way is becoming ever more urgent.

The World Resources Institute (WRI), a global research organisation, published a report recently that shows fish contribute 17% of global animal-based protein for human consumption and that demand is projected to rise by 58% by the year 2050. Developing countries consume more than 75% of the global fish supply and produce 80%.

So fish not only serves as a key protein for China, Southeast Asia and Africa, it also plays a huge role in their economies.

But according to the WRI:

They note that ‘virtually all of the future increase in world fish consumption will need to come from aquaculture’ – farm-raised fish – doubling the output from 2010 by 2050. But if the production of farmed fish scales (pardon the pun), so do the problems it causes.

So what’s the problem with fish?

I’d been brought up knowing that farm-raised fish didn’t have the cleanest record:

So I tried to buy wild-caught and Marine Stewardship Council-certified fish, but as I’ve learned more about how destructive and unsustainable the modern fishing industry is, the whole thing has left me with a bad taste in my mouth.

There must a better way…

A vision for the future?

‘We shall escape the absurdity of growing a whole chicken in order to eat a breast or a wing, by growing these parts separately under a suitable medium… The new foods will be practically indistinguishable from the natural products from the outset, and any changes will be so gradual as to escape observation.’

What if Churchill was right? What if we could simply grow the part of the animal that we needed, reaping all the benefits without any of the negatives?

These companies use cutting-edge technology to isolate the cells they need (originally sourced from an animal that isn’t harmed in the process), put the cells in stainless steel tanks with a nutrient rich solution similar to what the animal would eat ‘in real life’ and propagate the cells until they have enough to form the piece of meat or fish that is the finished product.

And this gut-level hesitation is understandable in some ways.

As a culture, we’ve become disconnected from our food – where it comes from, what its life is like, what its death is like and how it ends up in our trolly or delivered to our doors in plastic-wrapped packaging. We don’t see how much science and genetic tinkering goes into producing our food now, or what current food processing looks like in factories across the world.

Looked at from that perspective, most of our food is Frankenstein in nature…

But I can’t quite shake Churchill’s vision. What if I could have my fish and chips without the attendant guilt that comes from the food waste, environmental damage, unsustainable agriculture and sentient beings killed?

Would that be a utopian paradise, or a dystopian nightmare?

Is this moral / ethical?
Regardless of your feelings on religion, most people feel there is a line that shouldn’t be crossed when it comes to science and lifeforms.

The phrase ‘playing god’ comes to mind when you hear about a sheep named Dolly being cloned or scientists splicing genes to edit out ‘undesirable’ elements or genetically modifying crops under the watchful eye of the Monsantos of the world.

Is growing cells in the style of a microbrewery crossing that line? Without the rest of the animal – the neural processes, the central nervous system, the instincts – should the piece of meat be considered alive?

And If we can grow the flesh of an animal, where does it end? Does that lay the groundwork for a truly modern-day take on Frankenstein? Tech startups don’t necessarily have the best records on seeing how their inventions could be used for harm. Should we be letting them play in this space? And who is regulating it? The questions in this category are endless…

Should we be forced to live within our planetary means?
We are running out of food, in part, because of an exponentially growing population that requires more resources than the planet can naturally produce.

So do we have a moral obligation to the earth to not push her beyond what she can reasonably provide, thereby putting limits on population growth? Who gets to make that call and how would it be enforced? I shudder at the potential to perpetuate social injustice and inequalities under that scenario. Or do we have a moral obligation to humanity to try to adequately feed whoever is born by any means possible?

And are we entitled to eat meat anyway, just because that’s what we’re used to? If we run out of fish in the ocean, or land to produce enough cattle, chicken and pigs, should we just call time and make the switch to a different mix of proteins that are more plentiful? Or is this the start of a complete switch to cell-based, cultivated products that sit separately to the natural world?

Which leads us to…

Will we sever an essential connection by removing nutrition from nature?
Even though many of us are disconnected from the origin stories of our food, there is still a romantic link between the ocean and fish, the pastures and lambs, the rooster on the barnyard. If we removed that connection even further, would the regulatory give-and-take relationship with the planet be compromised beyond where it is today?

If I’m no longer eating fish from the ocean, will I care about the health of the seas in the same way? If I’m no longer consuming microplastic from my food supply, will I have the same incentive to clean up after myself?

I don’t have the answers to these questions – perhaps no one does yet. But they are important for all of us to consider as we move forward into a world powered by food technology.

In part two of this series, we go behind the scenes at BlueNalu to find out how they are harnessing that tech to solve the problem of feeding our growing appetites.