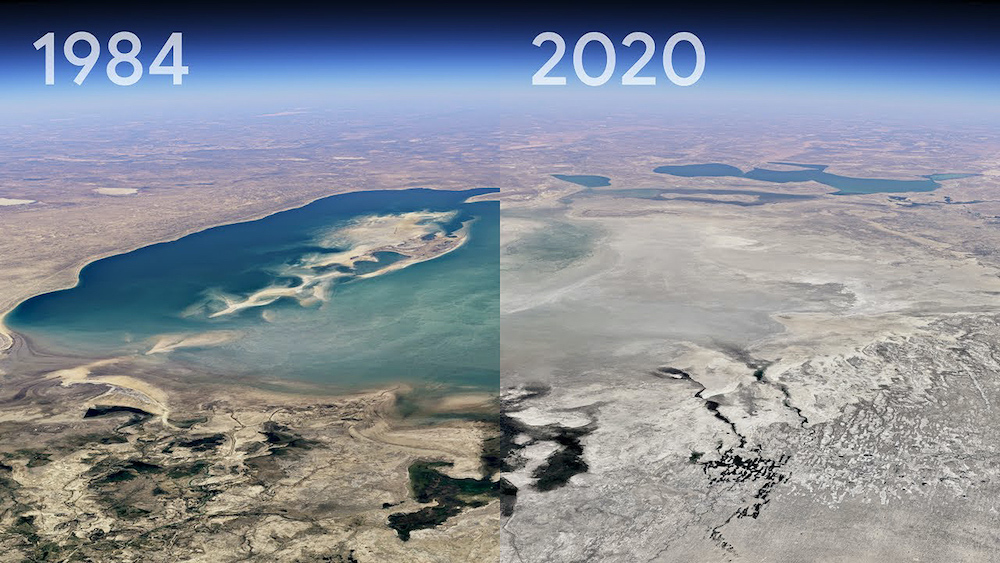 Just ahead of Earth Day, Google has added a new feature to the Google Earth app to help users visualize the impact of climate change.

Google’s biggest update in five years, Timelapse, is made up of 24 million satellite images taken between 1984 and 2020. Through a comprehensive time-lapse, users can now see how climate change has affected glaciers, beaches, forests, and other natural environments in the last four decades.

Google says it hopes the update will help its users to grasp the often-abstract concept of climate change. The changes to natural environments, it says, showcase the rapid rate of loss and how little is left to save.

The time-lapse comes after Google recently announced changes to its popular Maps app to help with its sustainability initiatives. The app will now default to the most eco-friendly route as long as it doesn’t significantly increase travel time.

“Our planet has seen rapid environmental change in the past half-century — more than any other point in human history,” reads a blog post by Rebecca Moore Director, Google Earth, Earth Engine & Outreach, on the launch. “Many of us have experienced these changes in our own communities; I myself was among the thousands of Californians evacuated from their homes during the state’s wildfires last year. For other people, the effects of climate change feel abstract and far away, like melting ice caps and receding glaciers. With Timelapse in Google Earth, we have a clearer picture of our changing planet right at our fingertips — one that shows not just problems but also solutions, as well as mesmerizingly beautiful natural phenomena that unfold over decades.”

Google identified five key themes as it embarked on the project: forest change, urban growth, warming temperatures, sources of energy, and what it calls the world’s “fragile beauty.”

The tech giant partnered with the CREATE Lab at Carnegie Mellon University in Pittsburgh to put the video together. It also worked with the US and EU governments in order to access data. In the US, it worked with NASA and the Geological Survey’s Landsat program, which is the world’s first and longest-running civilian-led Earth observation program. Similarly, Google collaborated with the EU’s Copernicus program.

“As far as we know, Timelapse in Google Earth is the largest video on the planet, of our planet,” Moore said.

All totaled, the project took more than two million processing hours and used thousands of machines in the Google Cloud “to compile 20 petabytes of satellite imagery into a single 4.4 terapixel-sized video mosaic.” That’s about the equivalent of 530,000 videos in 4K resolution, according to Moore. “And all this computing was done inside our carbon-neutral, 100% renewable energy-matched data centers, which are part of our commitments to help build a carbon-free future,” she says.

“We invite anyone to take Timelapse into their own hands and share it with others — whether you’re marveling at changing coastlines, following the growth of megacities, or tracking deforestation. Timelapse in Google Earth is about zooming out to assess the health and well-being of our only home, and is a tool that can educate and inspire action.”

Google’s new time-lapse promises to show users virtually any corner of the planet. Other time-lapse videos of climate change exist, but not at this scale. The new feature also includes a storytelling mode for 800 different locations and offers 2D and 3D formats.

Moore says with the help of its partners, Google Earth will continue to update the time-lapse in coming years, too.

“We hope that this perspective of the planet will ground debates, encourage discovery and shift perspectives about some of our most pressing global issues.”