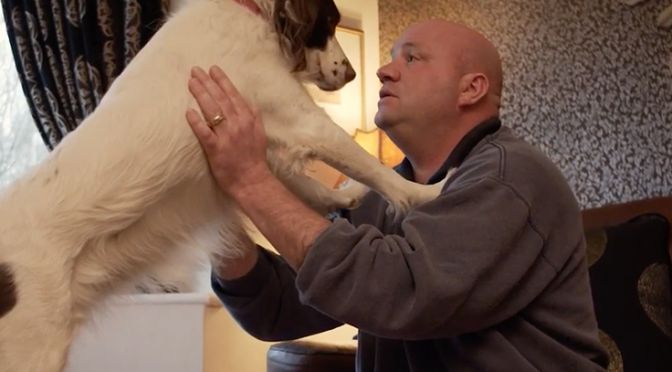 One Animal at a Time

Stuart Wilson is a spiritual medium and animal healer. We learn about how animal healing works and hear from two people – and their animals – that Stuart has helped.

And I didn’t really want to get up and give off this little bit of information, but I knew it would be important to somebody, so I stand up. ‘I’ve got James, and the 1st of May in my mind. 1st of May and the colour blue.’ And a lady in the corner would start sobbing and say, that was my son. And that was his birthday and that was his favourite colour.

My name is Stuart Wilson and I’m a spiritualist medium and animal healer. Spiritual healing is an energy that comes from the spirit world through the medium. It’s like an energy that comes through my crown chakra, and it goes through my body, though my hands – my hands get really warm – and I place my hands on the animal. And the healing helps for anxiety, any aches or pains, or any issue that animal may have. The spiritual healing will help for that.

As a child, I was passionate about animals. I had pictures of animals all around my bedroom. I wanted to be working in a zoo or be a vet when I was younger. And when I was going through school I realised I wasn’t academically strong enough. So when I first started working with spirit, I said to them, I want to work with animals. I started working with cats and dogs in a rescue centre, offering healing. It’s funny how spirit points you in that direction where you need to be.

Me and the wife used to own a caravan, and we looked high and low for an upgrade up and down the country every weekend. And we couldn’t find a caravan. And I said, come on spirit, common on mum and dad, show me where we can buy a caravan from. And they took us to a shop in Huddersfield, and I met a guy there called Gary whose wife, Michelle, had horses. She knew I was a medium and asked me if we would look at her horse.

The guides that are currently around me at the moment, I don’t really know a lot about them. I know that I work with a vet as one of my guides. I know that one of my guides is a vet nurse. But again, if they spoke surgeon terminology to me, I’d be lost. I wouldn’t know what they’re talking about. They will only use my mind as my mind works. So they keep it as simple as they can. So I can understand it.

So when we brought that evidence forward from the spirit world, I can talk to the animals owner and they’ll have that understanding of what we’re talking about.

Debbie:
Stewart did phone and say, just watch out for Sam’s mouth – it’s going to present problems – maybe an abscess. Which wasn’t relevant at the time. Sam was fine. About three months later, Sam stopped eating. There was a bit of smell coming from his breath and I thought – so then this conversation came forth. So I phoned the vet and said, I think Sam’s got an abscess. And he was like, ‘well I’m the vet’ type of thing and you’re not. So I thought, I’ll give him the benefit of the doubt.

Anyway, it did come back that Sam did have an abscess, a deep-rooted abscess on his tooth. Which antibiotics then cleared. To me a home isn’t a home without a dog. I love them. I love what you get from a dog.

Simone:
Prado started to fall unwell. We went to the vets, but we couldn’t quite figure out what was going on. So Stuart came round to see Prado. And the instant he saw him, the colour drained from his face. He explained to me that Prado was a very, very sick horse. And even with experience of horses, to immediately approach him and know how he was, it wouldn’t have been possible.

He then proceeded to tell me all about his past. Things that Stuart couldn’t possibly have known. He drew me a picture and he explained that the underlying problem was in his pylorus and his stomach. And that he had also something which I would have never thought of because the symptoms he was displaying are not common for that kind of thing.

I told my vet and in all honesty, they were like, you want to scope a horse because he’s got problems with his sinuses? I was like, well, yes because what have we got to lose? So after many conversations and persuasions, they did book him in. When they scoped Prado, they found he had grade four ulcers in his stomach and pylorus which is exactly what Stuart had said and drawn out for us. Stuart saved his life.

Stuart:
I just find that helping these animals, touches my soul. It feels like I’ve helped. I like helping, I’ve always helped people. But now to help animals, just touches my soul and makes me feel like I can make a difference. I might not be able to change the world, but if I can change the world for one animal, then that’s good for me.