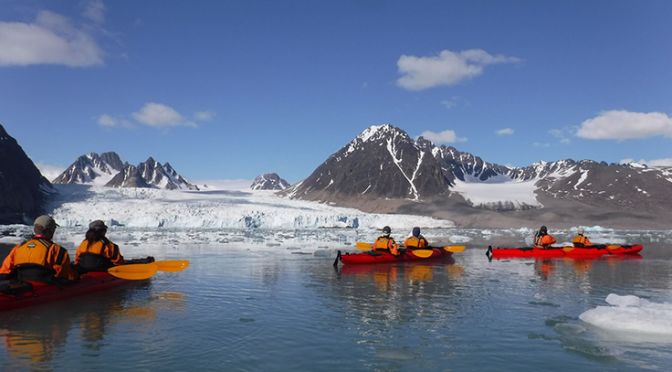 How an Arctic Expedition Changed the Course of a Life

After a life-changing expedition in the Arctic in 2018, Neal Maxwell returned home with a mission: to help eradicate plastic pollution and protect the environment and wildlife

Neal Maxwell turned 60 in 2018 and decided to spend the year celebrating rather than just one day. With a love of nature and adventure, he planned several trips that would take him around the world – from the heights of the Atlas Mountains to the wonder of the Arctic Circle and even skydiving above the British countryside.

It wasn’t all smooth sailing and joy however. With the loss of three key figures in his life – his father, his best friend and his mentor – 2018 was a year of heartbreak too.

It was the Arctic expedition that has had the most profound impact on him. Neal and his wife joined a small team at Longyearbyen – the northernmost inhabited town before you reach the North Pole. They circumnavigated Spitsbergen, the largest island in the Svalbard archipelago, on a converted ice cutter. And they learned about the climate crisis and how plastic pollution is impacting both the environment and wildlife.

‘If someone asked me what heaven looked like, I’d take them up to the Arctic and say this is it.’

Neal was lucky to be one of a handful of people to go out on the kayaks, paddling around icebergs and seeing the polar bears and walrus and seabirds up close in their natural landscape.

But they also saw how the receding glaciers are making it harder for the polar bears to feed and breed normally. And the plastic pollution, even so far north, was having a deadly impact on the wildlife. He saw a polar bear chewing on polystyrene blocks and learned that the walrus, who can eat 3-6% of their body weight in clams from the seabed, were consuming large amounts of microplastics from the clams.

‘The ocean connects everybody. Without the ocean we can’t live: every second breath you take is thanks to the ocean.’ If we damage the oceans, we’ll end up cutting off the very thing that sustains life on the planet.

Neal contacted Professor Jonathan Sharples at the University of Liverpool. He was ready to quit his job, study marine biology and devote himself to ocean conservancy. Jonathan acknowledged the passion driving Neal, but recommended he look at his current sphere of influence and the tools he had near to hand.

Not only is plastic cheap and versatile, it’s durable and water resistant. As such, it’s used in a variety of ways: in cladding panels, cables, pipes and gutters, windows and doors, shuttering, wall lining, floor covering, ceiling panels and roof coverings. That’s before we get anywhere near the material we use to fill the buildings.

So Neal, along with Jonathan and Dr Gareth Abrahams – an architect with experience in heritage buildings who was now lecturing in environmental science and planning at the University of Liverpool – started Changing Streams CIC. The not-for-profit works within the construction industry to reduce the plastic used and – through research with the university – identify suitable alternatives for building materials.

While initial conversations with the big building firms were positive as to the theory, they raised concerns over the cost and the hassle.

Neal is now going upstream to their clients – the pension providers, local government, national governments – and working with them to sign on to the Changing Streams charter. This states that plastic in construction will lead to significant and long-term damage to the planet, that members will work to reduce and eradicate plastic in the construction industry and collaborate with Changing Streams on the tools to do so.

If those groups sign on to the charter, the big builders tendering for the work will have to abide by it too.

There’s been a lot of work in the built environment about raising standards when it comes to energy efficiency and reducing fossil fuels. Architects and contractors are working to make buildings self-sustaining through solar panels, ground and air source heat pumps, rainwater harvesting and waste management systems.

But no one has been looking at plastic in the same way. Neal said they’re also looking to develop and accreditation programme for builders and contractors who are doing their part to reduce plastic in the industry.

Neal may have passed on the chance to get a degree in marine biology, but he continues to volunteer around the world on marine conservation projects.

So much of the coverage around reducing plastic in society sits with individuals making changes in their personal lives. And that is important. As Neal says, ‘we can all make a difference. No matter how small it may be. Even if it’s just swapping out an item in your weekly shop from plastic to non-plastic.’

But what we love is how he’s organising within an industry and working to change the status quo.

His hope is that we can come out of the COVID pandemic and press the green reset button. He said that while this has been a horrible situation, it has also brought countries together from across the world to find solutions. ’What we now need to do is address the environment with the same urgency and the same focus. We can’t afford for people to be dismissive about it.’

You can watch the full interview below where Neal shares his experiences of travel, adventure and loss that set him on a new path when many might be thinking about retirement. And you can learn more about Changing Streams on their website.