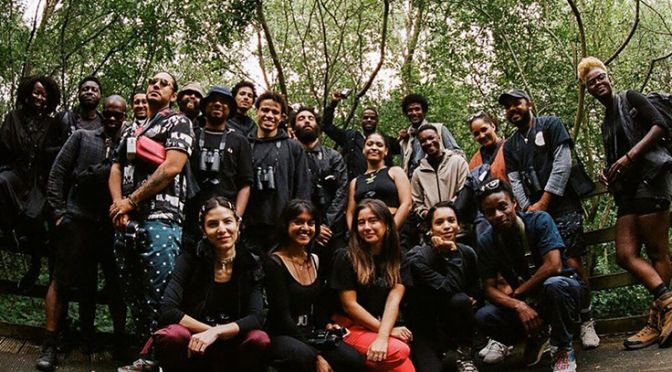 How Flock Together Is Redefining Birdwatching

Birdwatching collective Flock Together is addressing the underrepresentation of Black, Brown & POC in nature

This year, the Black Lives Matter movement has been thrown sharply into focus – not only by the murder of George Floyd in Minneapolis, but by a growing awareness of the difficulties faced by people of colour in every walk of life.

Take the case of Christian Cooper. An avid birdwatcher since the age of 10, he was birding in New York’s Central Park in May of this year when he asked a white woman to put her dog on a leash. She responded by telling him that she was going to call the police and tell them that there was ‘an African-American man threatening me’.

A video of the incident, captured by Cooper and shared to Twitter by his sister, has been viewed close to 45 million times, and eventually resulted in the woman losing both her job in finance and her dog.

It makes for outrageous viewing, but it’s also deeply distressing.

During a global pandemic, when time outside was meted out in daily walks and rides, and stress levels, isolation and anxiety were running high, the idea that an individual could not find some solace in nature simply because he was a person of colour is disturbing, depressing … and, for many people, all too normal an occurrence.

Just look at the post shared by author, father and TEDx speaker Shola Richards, in which he admits that he never walks in his own neighbourhood without his dog and daughters – because without them, ‘I morph into a threat in the eyes of some white folks’.

Now, in London, a collective is reclaiming the capital’s green spaces for people of colour who want the opportunity to birdwatch – or simply to spend time outside developing a new interest in a safe and inclusive group. Dubbed Flock Together, the group is still in its infancy but has a growing following on Instagram (@flocktogether.world) and over 100 active members taking part in organised walks – the details of which can be accessed via request in a direct message on Instagram.

Founders Ollie Olanipekun and Nadeem Perera first connected via the social platform in the early days of the pandemic. Both have a long-established affinity with birdwatching, having used nature as a coping mechanism, a form of meditation since their teens.

‘Spending time outdoors forces you to slow down,’ says Nadeem.

It’s easy to imagine that, where wildlife spotting is concerned, it also forces you to quieten yourself and your mind. One thinks of scuba divers, gliding through a watery, otherworldly realm, the only sound that of their breathing, or of the silent poise of the nature photographer, alone except for her own thoughts and observations.

People attending a Flock Together walk are encouraged to wear dark colours, so as not to scare off the birds; in the meantime, focusing on seeing and noticing various species calms often-racing thoughts. Yet there’s a space for these, too – midway through the walk, attendees are encouraged to talk about themselves, their recent setbacks and achievements, their experiences of being a person of colour.

And the truth is that one such experience is that quiet time in nature is not really seen as something that exists for them. Spot a large group of people of colour in a green space and the presumption would generally be that they are there to have a kickabout, or simply to hang out.

The birdwatching stereotype that’s existed for a long time is that of the ‘twitcher’ – the middle-aged white man squinting earnestly through a pair of binoculars and wearing a green waistcoat with an abundance of pockets. Perhaps a pair of wellies and a flat cap, for good measure.

David Lindo, aka The Urban Birder and author of an eponymous book, is one of the few role models for people of colour in a wildlife arena.

‘I think that a lot of those people [from an ethnic minority background] just don’t think there’s anything there for them because all they see is white people doing it,’ he said in an interview earlier this year.

One imagines then, that even when research showed, in 2017, that birdwatching was increasingly an activity being taken up by millennials, it’s likely that it wasn’t seen as something that Black or Brown skinned people would do. By setting up Flock Together, Ollie and Nadeem are hoping to change those preconceptions – for now, with regular walks and long term, with school visits and organised day trips for young people.

‘A gaggle, a kettle, a murder, a parliament, a gang,’ says the caption on recent post. ‘Whatever word you use to describe a collective of birds, Flock Together is growing.’