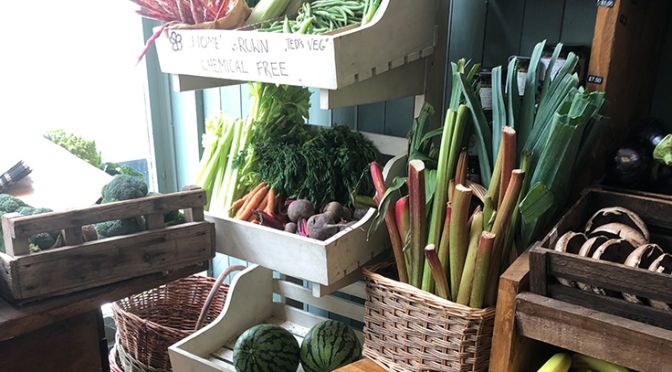 How to Shop at a Zero-Waste Store

The dos and don’ts of plastic-free shopping.

‘There’s no one “right” way to shop at a zero-waste store,’ explains Anna Kokornacka, co-owner of Beetroot & Beans, in South East London’s Forest Hill. ‘Educating ourselves about reducing waste is an ongoing process.’

As an example, she says, it’s not uncommon for someone to come in and place a bulb of garlic in one paper bag, a couple of tomatoes in another, and a courgette in a third. ‘The assumption that it’s fine, because it’s paper rather than plastic, is understandable, but actually, it’s still unnecessary packaging,’ she says.

And these small tweaks in thinking are catching on; since opening in April 2019, she says that she’s seen increasing understanding from customers about the impact of their choices.

‘It’s been long ingrained in us, this mentality, that food has to be “in” something,’ she says. ‘But often, it doesn’t. A canvas bag or basket full of vegetables doesn’t need to have those vegetables contained in further bags.’

‘You can really come armed with any receptacle you’re happy to use,’ she adds. ‘Basically, anything that will fit on the scale – and, because some people are nervous about how to weigh things – simply because we, as a society, are so out of practice with it – we do that for them. We have people come with pillow cases, to fill with dry goods. Empty bottles, empty jars, the plastic bags that supermarket bread is sold in…’

Is there not a slight cringe attached to walking into a zero-waste store with plastic? Are people not abashed to, say, come in with plastic tubs, washed out after last week’s takeaway?

‘I mean, who doesn’t have the occasional takeaway?’ laughs Anna. ‘There may be some who feel that way, but there’s no need to. Some plastic is inevitable – it’s finding ways to reuse it that’s important.’

And speaking of takeaways, this, I think, is one of the critical ones: zero-waste goes hand in hand with zero judgment. For many, the thought of entering such a store may bring on flashbacks of teen parties and underage nightclub forays – ‘What will they think? What should I do? Is this outfit okay?’ – when really, just taking a step in the direction towards this mode of shopping is a start.

The store is an Aladdin’s Cave of goodness: wooden shelves lined with glass jars, large bins filled with grains, vats of household cleaning products, baskets piled with gleaming fruits and vegetables. The smell hits you as soon as you walk into the store. With everything devoid of plastic wrapping, all of those fresh, earthy scents are heavenly, and the produce is temptingly tactile.

It evokes the same kind of feeling that shopping at an open-air market on holiday always seems to. It’s something to be lingered over and revelled in.

‘It definitely makes you plan ahead,’ says one customer, who has come in to top up her detergents in a selection of bottles and jars, which she then stows into a canvas shopper. Even so, the impulse- or less-organised shopper won’t need to go home empty handed. Most zero-waste shops will have, as well as paper, a variety of other receptacles for free use or purchase.

Here, a stash of empty glass jars and bottles, washed and ready for use, are available free of charge for customers caught short-handed. There are also old-fashioned string bags for purchase and — my personal favourite — a gauzy swathe of drawstring bags for fruits and vegetables. They’re repurposed from old net curtains by Anna’s mother, and sold for £1.50 each.

Admiring the Kilner jars arranged on the shelves of Beetroot & Beans, I’m suddenly struck by how similar they look to my own kitchen shelves. Except that my fancy jars have been filled with rice, pasta, and lentils bought in supermarkets. They’re decanted from their swiftly-binned plastic and then paraded in an Insta-worthy display of wholesomeness.

Gulp. And there was me wondering whether reusing plastic tubs was cringe-worthy.

Indeed, one of the effects of shopping zero-waste is not only reducing your plastic and packaging consumption, but also reducing your food waste. When things are unpackaged, you tend to buy only what you need – three potatoes, for example, as opposed to a 5-kilogram sack because that’s what’s in front of you (and that you later find at the bottom of a kitchen drawer, sprouting like a garden in spring).

The store adheres to the same policies: produce about to be past-its-best is put outside at a reduced price where it’s snapped up. Some customers, with plans for jam- or chutney-making, arrange to have slightly bruised items set aside for them. Still other items are donated.

There’s still something of a perception that shopping this way is more expensive – but that’s slowly changing, says Anna.

‘The fresh produce will likely be higher-priced, because it’s organic and pesticide free – but, as you’ve seen, you’re likely to buy less, too. Groceries and household goods, however, tend to be cheaper. It’s just a matter of people slowly adapting their mindset and realising that this way of shopping is doable, accessible and affordable for everyone.’