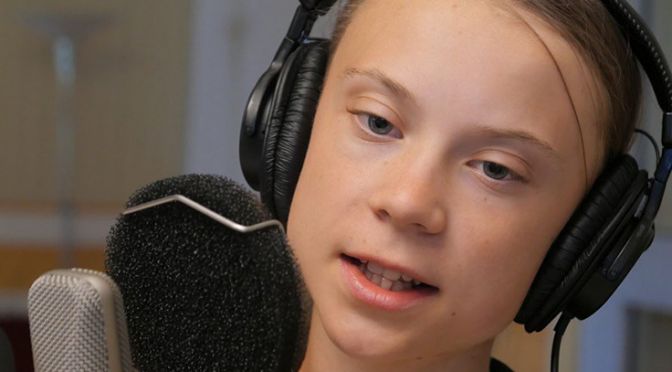 Humanity Has Not Yet Failed

The climate and ecological crisis can no longer be solved within today’s political and economic systems, says Greta Thunberg in a radio address

Over the course of 75 minutes on the Swedish radio show Summer on P1, Greta Thunberg tells the story of her 2019 journey to America for the UN climate conference, her subsequent road trip across 37 states and her dangerous journey back across the North Atlantic during the storm season to reach Europe in time for COP25 in Madrid.

Interspersed with the anecdotes of her travels, she lays out a comprehensive and compelling case for us all to wake up to the scale of the climate and ecological crisis. To educate ourselves on the science. And to demand the urgent action required to give us a fighting chance to save the planet.

The show is available in English on Spotify and it’s worth listening to the entire thing, but in case you’re short on time, here are a few of the moments that really resonated with us.

Of a meeting she and a group of climate activists who were primarily representatives of indigenous people from North and South America had with Speaker of the House Nancy Pelosi, she said:

On the wall hangs a big portrait of Abraham Lincoln. The atmosphere during the meeting is awkward at best. It is as if two entirely different worlds collide. Worlds separated by hundreds of years of injustices, structural and systematic racism, oppression and genocide…We fight for climate justice. But how can any justice be achieved when the social and racial injustices have, in so many parts of the world, never been officially acknowledged in the public eye?

The governments who signed on to the 2015 Paris Climate Agreement to keep the average global temperature rise over pre-Industrial levels to under 2 degrees celsius committed to follow the current best available science. Greta points out that we can find that guidance in the IPCC’s SR 1.5 Report, on page 108:

If you read between the lines, you realise we are facing the need to make changes which are unprecedented in human history.

The fact that the responsibility to communicate [the basic facts of the science] falls on me and other children should be seen for exactly what it is: a failure beyond all imagination.

After visiting Paradise, California, and seeing the destruction that wildfires brought to that community, she reflected:

The fact that the climate crisis is already affecting people today is hardly new. Although it would sometimes seem like it judging by the ongoing discourse. We often hear, ‘we need to act for the sake of our children, that the future living conditions will get significantly worsened unless we act now’. And that is, of course, true. But it seems like we keep forgetting that large numbers of people around the world are dying already today.

The ones who are and will be hit the hardest are the same as in most other crises: the poorest and the most vulnerable. Those who are already suffering from other injustices. Namely, people in developing countries and, above all, women and children, since they are the ones with the least resources living in the most vulnerable parts of the global society.

The global aspect of equity in climate justice make up the very heart of the Paris Climate Agreement. Developed countries have signed up to lead the way and this is so the people in developing countries can have a chance to raise their living standards and build some of the infrastructure that we in the industrialised world already have, such as roads, hospitals, schools, electricity, sewage systems and clean drinking water.

After a journalist asked her how we were going to solve the climate crisis, Greta said:

The only way is to treat the climate climate crisis as you would any other crisis, to come together, gather all the experts, put other things aside and adapt to the new reality. To act as quickly and strongly as the situation allows.

In a crisis you act, even if you don’t know exactly how you’re going to solve the problem. In a crisis, there’s no time to wait for a specific answer and details because the answers have to be found along the way. In a crisis, you need to put all cards on the table and think long term and holistically.

When the location for COP25 changed from Santiago, Chile, to Madrid, Spain, Greta was left searching for a way to get there. She said people don’t normally sail across the North Atlantic in November because of the danger of storms, and that she considered hitching a ride on a cargo ship. But she knew that wasn’t an option because of who she is. She explained:

But everything I do or say gets altered and turned upside down, which leads to mockery, conspiracy theories and organised hate campaigns, which in turn lead to death threats to me and my family. And that build up of hate and threat is much riskier than all the storms in the world.

In terms of what we can take away from the coronavirus pandemic to apply to the climate crisis, Greta said:

A crisis is a crisis. And in a crisis, we all have to take a few steps back and act for the greater good of each other and our society. In a crisis, you adapt and change your behaviour. And indeed, this is what the world does at record speed.

There’s nothing positive about the corona crisis from a climate perspective…The corona tragedy has no long-term positive effects on the climate apart from one thing only: namely the insight into how you should perceive and treat an emergency. Because during the corona crisis we suddenly act with necessary force.

She ended the radio show by saying:

Things may look dark and hopeless, but I’m telling you there is hope. And that hope comes from the people, from democracy, from you.  From the people who more and more themselves are starting to realise the absurdity of the situation.

The hope does not come from politics, business or finance. And that’s not because politicians or business people are evil, but because what is needed right now simply seems to be too uncomfortable, unpopular and unprofitable. Public opinion is what runs the free world and the public opinion necessary is, today, non-existent. The level of knowledge is too low.

But there are signs of change, of awakening. Just take the Me Too, Black Lives Matter or the school strike movement for instance. It’s all interconnected. We have passed a social tipping point. We can no longer look away from what our society has been ignoring for so long. Whether it is equality, justice or sustainability.

From a sustainability point of view, all political and economic systems have failed, but humanity has not yet failed. The climate and ecological emergency is not primarily a political crisis, it is an existential crisis, completely based on science. The science is there, the numbers are there. We cannot get away from that fact. Nature doesn’t bargain and you cannot compromise with the laws of physics.

Doing our best is no longer good enough. We must now do the seemingly impossible. And that is up to you and me. Because no one else will do it for us.