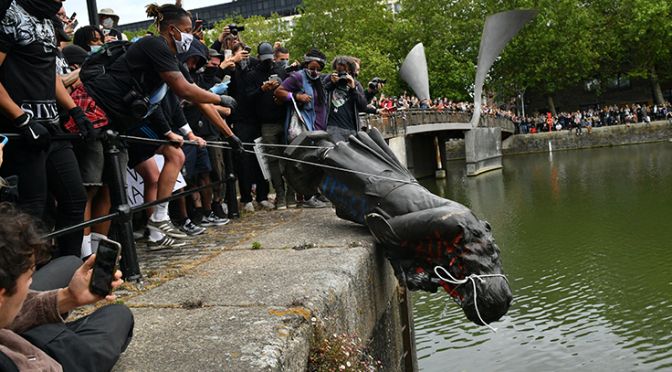 For years now, Bristol Council in south-west England had been failing to find a resolution for the question of what to do with a prominent public statue of Edward Colston, a Bristolian who had given much to the city but whose wealth was built upon the slave trade. A resolution was, ultimately, forced on June 7 when a crowd of protesters tore down Colston’s statue and threw it into the harbour.

Priti Patel, the home secretary, has called for a police investigation in response to what she has termed the ‘utterly disgraceful’ toppling of Colston’s statue, seeing it as an act of ‘sheer vandalism and disorder’. But Patel is no expert in the history of public sculpture. She doesn’t understand what has actually taken place.

As a scholar who has spent the last decade researching the public sculpture raised in Colston’s own lifetime, I welcome the act – and not just because the statue’s meaning needed to be re-inscribed. I also think that anyone who believes in the value of public sculpture should welcome acts that enliven these works – acts that point to their ongoing relevance.

Protesters tore down Colston’s figure, lay him prostrate on the ground and leaned on his neck. In the very act of mirroring George Floyd’s death, the statue was brought to life and is now speaking, very loudly, to us. At last, the significance of Colston’s statue has been publicly redirected, with the energies of protest ushering in the next phase in the life of this monument.

In the majority of cases, public sculpture is commissioned and made for political reasons. It is natural, then, that it should invite political response.

Rome – the great city of public sculpture – recognised this through the tradition of Pasquin. In the 16th century, the Romans gave this name to an eroded classical statue and started attaching notes to its base. These notes contained searing critiques of the governing institutions of the day, both church and state. The statue became a site of protest, with Pasquin able to speak for the ordinary people of Rome.

There were, of course, other ways in which the meaning of the Colston statue could have been reshaped. It could have been put in a museum where it would have spoken truth to power: publicly owning the fact that Bristol’s wealth was based upon the slave trade. Or a black British sculptor could have been invited to respond to the work, erecting a statue to face, or replace, Colston.

All would have involved a more timely intervention on the part of the local council. Across the country, councillors should be taking heed of events in Bristol and be more proactive in responding to similar calls for change.

Facing up to history

What has happened in Bristol will become a defining moment in the life of the Colston statue. I hope Bristol Council fishes it out the water and sticks it in a museum so we don’t forget what has happened. For Colston is not a figure who should be forgotten, and pretending he didn’t exist won’t help in the massive re-education project that this country so obviously needs.

Those who would defend these statues often point to the public philanthropic and charitable deeds undertaken by their subjects. They make the argument that, in some ways, the good might outweigh the bad. But slavery surely was the lowest ebb to which Britain sank in its search for global dominance. And we shouldn’t pretend that the people who profited from the trade were unaware of the sheer brutality involved.

Colston himself would have been keenly aware of the politics of public sculpture. He lived through decades which saw the massive expansion of Britain’s cities, including a then-new vogue for stone sculpture in public spaces. From the outset, these statues invited political responses, be it criticism registered in print, or through physical acts.

For example, in 1686, the Corporation of Newcastle-upon-Tyne looked to show its allegiance to the recently crowned James II, commissioning the production of an enormous equestrian statue of the new king, in which he sat confidently on a rearing horse. It cost the equivalent of some £100,000 in today’s money. Just two years later, as James was forced into exile amid events that became known as the glorious revolution, the bronze was torn down by an angry mob and James (horse and all) was thrown in the river. The statue was later retrieved, melted down and transformed into bells for the nearby All Saints Church.

The drowning of Colston’s statue is a single act, and it does not fix the bigger issue of what we do with the architectural layers that shape Britain’s skyline today. There are, after all, so many Colstons lining British streets.

It is more comfortable to pretend that it isn’t true, but Britain is a nation that has long valued some bodies over others: men over women, the rich over the poor, Christian over Jewish, white over black. On every front – social, scientific and cultural – the leading research continues to prove that we have not found equality on any of these fronts. How long, we should ask, should it reasonably take to find a way to make all bodies equal?

The change of circumstances to Colston’s statue should not trouble us: it is merely another, and perhaps the most significant, stage in the life of this work. The meaning it now holds – one of protest against a history of racism and white privilege, makes it more important than ever.

We can only hope that in centuries to come, it might be studied for the political role it played in rewriting the nation’s relationship with racism and its past.