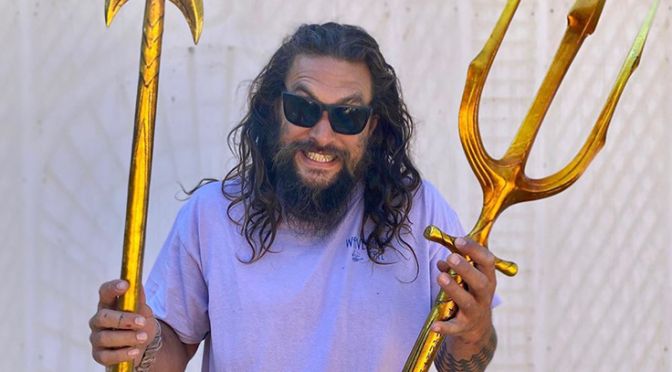 ‘My only trident broken, but I put it to good use. DONATE TO CHARITY. Help those in need and spread the word. I wanted to call attention to a badass action @Greenpeace is doing right now,’ wrote Jason Momoa on his Instagram account. ‘Four Greenpeace Nordic activists just swam to and are currently occupying an oil rig in the Danish North Sea to demand a legal ban on all new oil exploration.

‘Because I couldn’t be with them in person, I sent over my Aquaman trident in the hopes that it might help them to protect our beautiful seas and planet from the real villains – the fossil fuel industry. Politicians need to step up to provide us with more sustainable sources, instead of allowing this industry to tear up our oceans and land.

‘Aquaman would never let this shit happen, and neither should we. Head on over to @Greenpeace to see what’s happening and what you can do. Warner Brothers I need more tridents. We need to help and share come on. ALOHA J’

The four Greenpeace activists swam from the Rainbow Warrior, a Greenpeace ship, to the ‘Dan Bravo’ oil rig, which is in Danish territory and operated by the French oil company ‘Total’.

Jane Fonda sent a knitted red hat with a video message supporting the activists: ‘Because I cannot be with you in person, I’m sending you this warm hat. I hope you find it useful on that cold, wet oil rig. My love and admiration comes along with it and I want to thank you from the bottom of my heart for fighting the good fight and putting your bodies on the line.’

Lucy Lawless, the incarnation of the iconic series ‘Xena: Warrior Princess’, has participated in Greenpeace actions against oil drilling in the past. She sent a jar of spirulina to help the activists with the ‘boom boom’, since she knows from experience that ‘they will need it’.

‘It’s heart-warming how the very activists who are limited by a worldwide pandemic to take to the streets to make their voices heard, now choose to support peaceful activism out in the middle of the ocean from a distance. The catastrophic impacts of climate change will make the most vulnerable suffer the most and we urge rich countries such as Denmark to lead the way and end new oil,’ said Greenpeace Denmark climate campaigner Sune Scheller, from onboard the Rainbow Warrior.