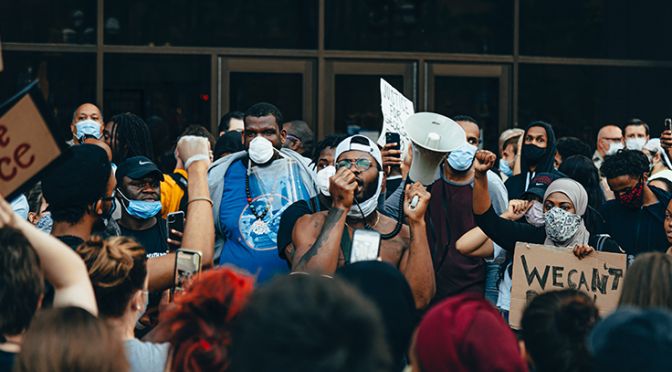 It’s time for systemic racism and inequality to end… #BlackLivesMatter

That’s how long Derek Chauvin, a Minneapolis police officer, knelt on George Floyd’s neck after he had been arrested and handcuffed. After he was pulled from the police car and thrown onto the ground with two other officers kneeling on his back and legs.

And despite George Floyd telling the police officers that he couldn’t breathe 16 times in less than five minutes.

Derek Chauvin, who has a history of excessive force against black and ethnic minorities, has been arrested and charged with murder and manslaughter. The three other officers with him at the scene of the crime have also been fired and are under investigation. They are Tou Thao – who has also received complaints of excessive force, Thomas Lane and J. Alexander Kueng.

This murder of George Floyd is simply one of the latest examples of police brutality and white vigilante action against black and ethnic minorities in America stretching back hundreds of years.

And now, one week after the murder, protests continue in 140 cities across America. While the majority of the protesters have been peaceful, anger has erupted into violence and destruction.

The world has watched in disbelief as films and images circulate online: police in full riot gear acting aggressively toward demonstrators, police firing rubber bullets and using pepper spray on passers-by as well as on documented press crews, buildings and cars on fire, shops being looted.

And through it all, Donald Trump sits behind closed doors tweeting inflammatory remarks.

While we do not condone the use of violence or the looting of shops or the destruction of personal property, we do stand in solidarity with the protesters and demand justice.

The systemic racial inequality and injustice that allows police officers and white vigilantes to kill black people without consequence must end.

Of course not everyone is taking part in the violence.

We are moved by the international vigils and marches taking place in cities around the world in support of #BlackLivesMatter.

And we are proud of the ordinary citizens from all races, backgrounds and faiths taking part in demonstrations so that they are counted in this moment, standing up for what’s right.

We all have a part to play in ending racism – as individuals, as part of local communities and on the national level. Here’s how to get started:

Today it’s about George Floyd, but it’s also about Ahmaud Arbery, Breonna Taylor and the other people who have been murdered by those in positions of power. We need to say their names. We need to know their stories.

And we need to gear up for longer fight ahead to dismantle the systems that entrench white supremacy, patriarchy and colonialisation around the world. All together now…