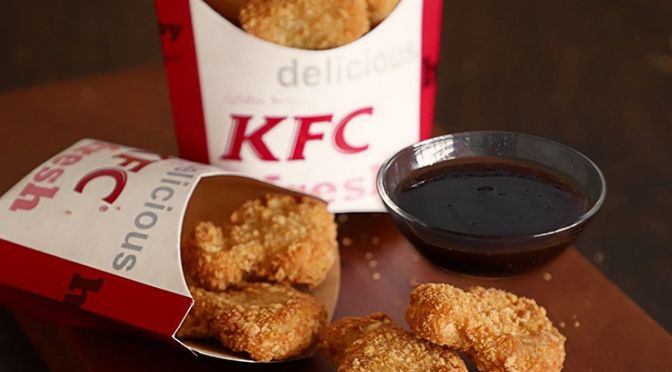 KFC Doubles Down on Chicken Alternatives

Do you remember the social media posts from last August when the Cobb Parkway KFC in Atlanta, Georgia, held a one-day trial of vegan fried chicken? The lines were around the block and people waited over an hour to give it a try.

The vegan boneless wings and chicken nuggets were created in partnership with Beyond Meat, the company behind the famous Beyond burger, and it’s fair to say it was a smash hit.

Ethan Brown, founder and CEO of Beyond Meat, said at the time: ‘KFC is an iconic part of American culture and a brand that I, like so many consumers, grew up with. To be able to bring Beyond Fried Chicken, in all of its KFC inspired deliciousness, to market speaks to our collective ability to meet the consumer where they are and accompany them on their journey.’

While the response in Atlanta was positive, the two companies have been working together to get the texture spot-on.

Now, KFC is rolling out the trial of the new and improved plant-based nuggets to 50 locations in Southern California. It does come with one caveat: while the nuggets are vegan, they will be fried in the same fryers at their chicken products.

‘I’ve said it before: despite many imitations, the flavor of Kentucky Fried Chicken is one that has never been replicated, until Beyond Fried Chicken,’ Andrea Zahumensky, chief marketing officer at KFC, said in a statement. ‘We know the east coast loved it, so we thought we’d give those on the west coast a chance to tell us what they think in an exclusive sneak peek.’

And in a completely different type of trial, KFC has announced that it will be working with a Russian 3D printing company to develop a bioprinted lab-grown chicken nugget for their Moscow restaurants later this year.

‘Crafted meat products are the next step in the development of our ‘restaurant of the future’ concept,’ said Raisa Polyakova, general manager of KFC Russia & CIS, in a statement. ‘Our experiment in testing 3D bioprinting technology to create chicken products can also help address several looming global problems.’

Made with plant material and cultured animal cells, the lab-grown chicken nuggets will be a world-first, and will have a positive impact on the environment. Cell-based meat can cut energy consumption in half, reduce greenhouse gas emissions by 25-fold and uses less land than traditional animal farming.

‘The rapid development of such technologies will allow us to make 3D-printed meat products more accessible and we are hoping that the technology created as a result of our cooperation with KFC will help accelerate the launch of cell-based meat products on the market,’ explained co-founder and managing partner of 3D Bioprinting Solutions, Yusef Khesuani.

So what do you think? Would you be up for a vegan Beyond Fried Chicken nugget or one that started in a lab and reaches your plate via the 3D printer?

The global pandemic has revealed vulnerabilities in our food supply chains and the climate crisis is likely to lead to massive changes in how and where we source our food.

So we’re excited to see these innovative experiments playing out and will certainly be queuing for a taste as soon as they reach these shores.