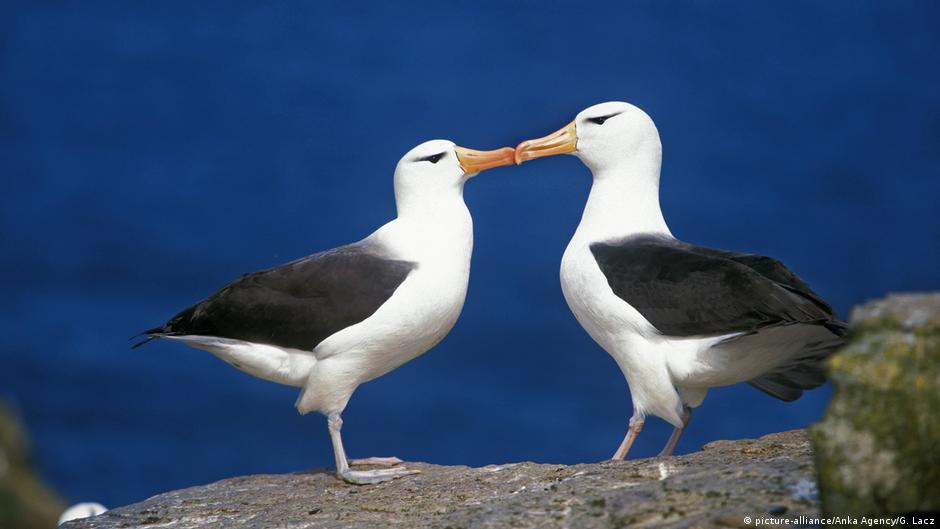 Marriage is No Longer the Chief Cause of Divorce in Albatrosses. It’s Climate Change.

A study says global warming is the albatross around albatross couples’ necks.

Black-browed albatrosses are renowned in the animal kingdom for their monogamy. However, a recently published Royal Society report says that these loyal birds are now splitting up more frequently. Usually, after choosing a mate, only 1-3% of pairs would split. Now, the research indicates, that in years with higher than average water temperatures, 8% of couples were going their separate ways.

Observing the behaviour of 15,500 wild albatrosses in the Falkland Islands over 15 years, researchers concluded that warmer waters caused fewer fish. This, in turn, meant a harsher environment that forced birds further away to hunt. Plus, it increased stress levels. Historically, albatross divorce was caused by a reproductive failure. But the researchers were surprised to find higher water temperatures were pushing up divorce rates even when reproduction was successful.

Francesco Ventura, co-author of the Royal Society study, concluded that warming waters were forcing the birds to hunt for longer and fly further. If birds then failed return for a breeding season, their partners may move on with someone new. Added to that, when waters are warmer and in harsher environments, albatross stress hormones go up. Ventura said the birds may feel that and blame their partner. He explained, “We propose this partner-blaming hypothesis – with which a stressed female might feel this physiological stress, and attribute these higher stress levels to a poor performance of the male.”

The report’s publication is timely. International albatross populations are declining at unprecedented rates –  5-10% a year, since 2005. These dropping numbers affect the birds’ mating patterns in other ways. For example, Australia is seeing more male-male parings where a female partner can’t be found. Ventura continues, “If we’re talking about a population with a much lower number of breeding pairs, that disruption of a bond might definitely induce some disturbance in the regular breeding processes.”