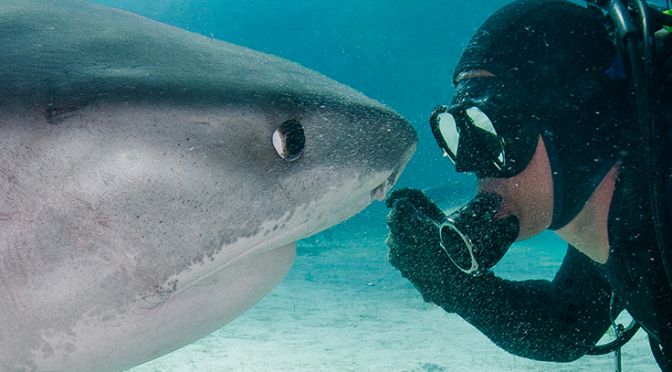 For the past 20 years, Jim Abernathy has been using affection and patience to help protect and preserve these ‘gentle giants’

In 2002, Jim Abernathy was doing a scuba dive when we saw a shark swimming into the area with a large fishing hook through its top jaw. Over the course of a few hours, Jim patiently gained the shark’s trust, swimming close enough to remove the hook from its jaw.

‘I discovered sharks are sensitive creatures like dogs and cats and thrive on something they never had before, affection,’ Jim said.

‘Discovering this was a game-changer for me because half the sharks I’d see every day would have hooks – so I started trying to be friends with them and eventually I’ve removed over 100 hooks from sharks using affection, without an injury to myself.’

One of those sharks that Jim has befriended is Emma, a 15-year-old tiger shark, that he’s removed four hooks from. They’ve developed quite the friendship over the past two decades, to the point where she’ll come in for attention and a head rub when she sees Jim in the water.

He created this heartwarming video with The Dodo and it’s just what we needed to see this week.

‘It’s quite remarkable to see this enormous, wild animal seeking out affection.’

Jim runs an eco-tour company in South Florida that allows those with an adventurous bent to get up-close-and-personal with the ‘gentle giants’.

A conservationist, filmmaker and photographer, Jim is dedicated to protecting and preserving the sharks he’s grown up swimming with. You can learn more about Jim and his tours at https://scuba-adventures.com/ and about his conservation work for endangered species at https://www.wildlifevoice.org/about/