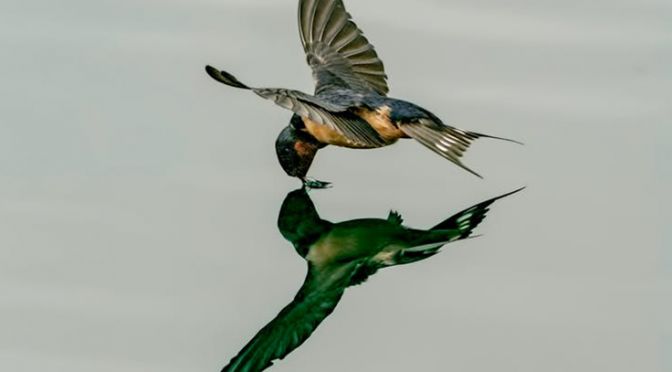 More Than a Water Feature

The first swallows have made landfall in the UK, fanning out over the greening landscape. The early arrivals, generally males, are a streak of electric blue in the spring sunshine.

These heralds of a new season were once common on the agricultural lowlands of Europe and North America, but many species of farmland bird are in trouble. In the UK, 19 of these species declined by almost half between the 1970s and the late 2000s, as agricultural efforts intensified and vast fields of pesticide-drenched crops replaced a patchwork of meadows, woodland and pasture.

The insects these birds eat have also declined. With fewer habitats and less food, the UK’s turtle dove population has fallen by 98% since 1970 while grey partridge numbers are down by 91% on 1967 levels. Swallow populations are holding up, but fluctuate from year to year.

John Clare, the farm labourer and poet of the English countryside captured the aerial mastery of the swallow in a poem, noting ‘the horse pond where he dips his wings’. Clare was right to associate this bird with farm ponds. You can still see swallows hawking over them 200 years later, although this has less to do with inspiring poets than getting a good meal.

Ponds are hotspots of insect life in the increasingly barren landscapes of intensive farmland. The adult stages of midges, mayflies and dragonflies hatch from them after a year or two growing as nymphs in the murky depths. When they emerge from the water, they fly up to create what has been called an ‘insect chimney‘ of abundant and particularly nutritious bird food – a beacon for birds to home in on.

Read more: Ponds can absorb more carbon than woodland – here’s how they can fight climate change in your garden

Researchers first discovered these insect chimneys after noticing how farmland bird numbers tended to increase around ponds that had been restored in north Norfolk. Like many lowland landscapes, the once abundant ponds of Norfolk – dug out for watering livestock, producing fish, washing equipment and a host of day-to-day tasks – are now abandoned, shrouded in impenetrable willow and alder. Restoring the ponds by cutting back the trees and digging out the sludge brings them back to life.

In the latest study, ecologists compared insects caught from these restored ponds with bugs emerging from abandoned ponds of a similar age and history nearby, using floating net traps.

The differences between the ponds was startling. There were over 18 times more insects emerging from restored ponds compared to those that hadn’t been restored, and the sheer mass of insects hatching from the restored ponds was 25 times greater. Healthy ponds which have the shroud of overgrown vegetation cut back and the sludge dug out rapidly recover the aquatic plants and insect life they lost, producing many more fatter, juicier insects.

The insects from restored ponds were mostly mayflies, compared to the true flies (Diptera) hatching from their gloomy, unrestored neighbours. A juicy mayfly is more of a meal than the average gnat. Either is still likely to be more nutritious than the meagre fare on the surrounding landscape, but aquatic insects have much higher levels of the best fatty acids for chick health and development.

Most bird species – 33 of the 36 recorded – were much more numerous at the restored ponds. All three aerial specialists – swallows, house martins and swifts – were only recorded at these sites, probably as they’re unable to hawk through the gloom and tangle of the unrestored ponds. They may also have been tempted there by tasty pollinator insects, which tend to be lured towards open ponds.

Insects hatching from the different ponds did so at different times, too. So not only do the birds benefit from a chimney of food at each pond, the staggered timings of these chimneys developing creates a seasonal conveyor belt of food. Each pond hits its peak of insects emerging at different times, so food supply can last throughout the season.

Eventually, autumn will come and the swallows, martins and swifts will return south to ‘cheat the surly winter into spring’, as John Clare once wrote. But beneath the still surface of little ponds, next year’s bird food buffet will be brewing.