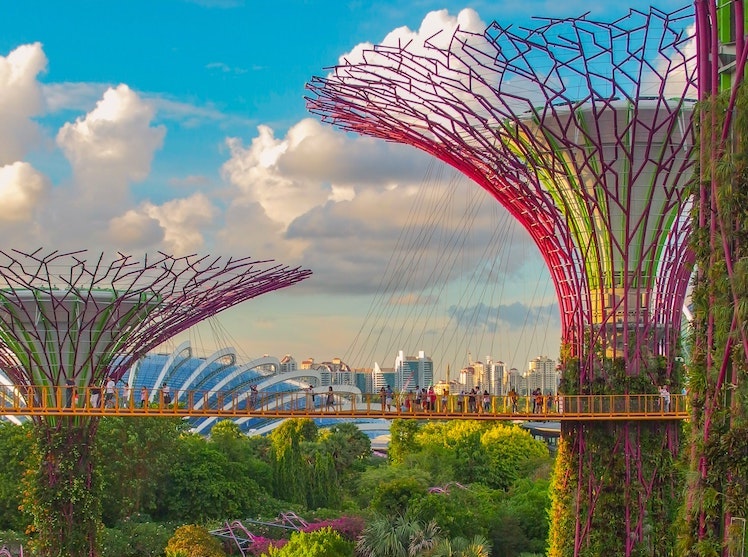 The 9 Most Sustainable Cities in the World

The race is on to go green. These cities are leading the way.

What Makes a City Green?

The United Nations Environment Programme (UNEP) predicts that two-thirds of the world’s population will live in an urban area by 2050. Its Sustainable Development Goals (SDGs) for Cities cite sustainable transport systems, access to public spaces, sustainable buildings, policies towards climate change, and resource efficiency as key markers of a “green” city.

“Planet” captures ‘green’ factors like energy, pollution and emissions. How much of a city’s plastic ends up in landfill? How much is recycled?

These kinds of metrics are important for setting global standards and objectives. However, we believe that a more holistic approach is warranted. How do residents engage with their city in an eco-conscious way, for example, via vegan restaurants and vintage stores? What innovative but small-scale solutions are on offer?

The 9 Most Sustainable Cities

Think of Zurich. You think of financial institutions and luxury watches? However, the city’s focus on “green” education and public awareness have made this Swiss city the most sustainable in the world.

Zurich’s approach to tackling climate change is for residents to use no more than 2000 watts of energy annually by 2050. Industry and business are regularly held to account on waste-reduction goals. Since 1991, all flat roofs which are not used as roof terraces must be “greened” to increase biodiversity. All new Zurich constructions must build up to conserve available natural spaces.

Public awareness is key and achieved through events such as the Zurich Multimobil action day, when the city is closed to cars.

Recycling is done differently here. Collection points, instead of recycling bins, gather 94% of all glass and 81% of all plastics. The relative expense of recycling bags – or Zurisaks – makes residents more mindful of generating waste too.

Zurich’s vast greenery helps to lower CO2 levels. According to data published by TravelBird in 2018, the overall green space per person in Zurich is 79.51 square meters. By comparison, London offers only 31.69 square meters. CO2 levels are further reduced by the public transport system. As well as cycling, walking, and tram networks, canoeing and skating is encouraged.

Bristol has a long history of environmental activity. This city was at the forefront of the UK’s city farm movement in the 1980s.

Plus, the Vegan Bristol website lists over 300 vegan, vegetarian and vegan friendly cafés, restaurants and shops in and around the city.

The Bristol One City plan sets out the city’s key climate aims for 2050, from increasing tree canopy cover by 25% to becoming carbon neutral. In 2018, Bristol became HQ for the country’s biggest renewable energy supplier Ecotricity. Its 29 wind parks generate 87.2MW of green electricity annually. This supplies 56,000 homes and saves 34,157 tons of CO2.

Bristol’s residents are the UK’s most enthusiastic recyclers. According to the Department of Environment and Rural Affairs (DEFRA), the city ranked number one in the UK in 2020, with an increased recycling rate of 47.4%. Plus Bristolians saw a significant drop in residual waste, falling by 27.2kg per household per year.

“As a city we are determined to lead the way in waste,” explains Councillor Steve Pearce on the Bristol council website. “Last year we launched the Waste Nothing Challenge, with 50 families aiming to be zero waste within 12 months. This year we will open our first-ever reuse shop.”

Hailed as the first EU European Green Capital in 2010, Sweden has been in the top ten of the Environmental Performance Index for over a decade.

According to the Swedish Waste Management Association, 50% of the household waste was turned into energy in 2017. Plus 1,850 million items are recycled in the “pant” system each year, where people get money back for empty cans and bottles.

The city aims to remove the use of fossil-fuels by 2040 via bio-fuel. Generated from sewage waste, this sustainable  fuel already powers some city vehicles. Wasted heat from the 30,000-seat stadium is re-used to warm over 1000 flats.

Even Stockholm’s waterfront conference venue is built from recycled materials. Its town planning is carefully considered to ensure residents can walk or cycle between most main locations.

Striking a balance between people and planet is key.

Professor Johan Rockström, the head of the Resilience Centre, explains, “Sweden can develop a vision for transition to sustainable welfare, where we put down goals of being the world’s first fossil-free nation”.

Copenhagen is often ranked as one of the greenest cities on the planet.  There are lots of reasons it earns that title. In 2009 the city set a goal to become the world’s first carbon neutral capital by 2025 as part of its CPH 2025 Climate Plan.

Moreover, the city has an energy-efficient district heating system that connects to nearly every household. Plus an innovative cooling system that saves 70% of the energy compared to traditional air conditioning.

Less than 2% of the city’s waste goes to landfill. It’s recycled or converted into energy at the Copenhill Resource Center. This waste-to-energy power plant doubles as an artificial ski slope!

Reduced CO2 emissions have been achieved with solar-powered boats, electric buses and hydrogen-powered taxis. The supercycle highways mean 45% of the city’s residents commute by bike. According to a 2012 study, the city benefits by €0.16 for every extra kilometre travelled by bicycle instead of by car. €230 million in health expenses are saved by cycling per year.

As well as natural swimming baths and floating saunas dotted around the city, the zero-waste movement is growing. LØS Market is a packaging-free zone. And Amass restaurant transforms “waste” ingredients -stems, seeds and skins- into tempting dishes.

Europe’s Green Capital 2016, the Slovenian capital is over 75% parks and green spaces. Plus it has 230km of cycling routes and over 10 hectares of the city centre are pedestrianised. Free electric taxis called “Kavalirs” (or gentle helpers) service the city too.

Ljubljana was the first European city to commit to a zero-waste goal.

The results are impressive. According to a Zero Waste Cities report, the city recycled only 29.3% of its waste and was lagging behind the rest of Europe in 2008.  By 2019, that figure was 68%, putting it at the top of the EU recycling leaderboard. A cutting-edge waste management system means the city sends 80% less waste to landfills than it did in 2008.

Few people know that Uruguay is leading Latin America when it comes to eco-friendly policies. This country of 3.5 million people is striving to be carbon neutral by 2030. Beyond lowering livestock methane emissions and increasing forest coverage, Uruguay has radically transformed its energy grid.

Since the signing of Kyoto Protocol in 1997, Uruguay’s aggregate renewable energy supply has grown by 93%. According to the International Energy Agency, only Denmark, Lithuania and Luxembourg are more reliant on wind and solar power. CO2 emissions have fallen roughly 20% from their 2012 peak.

As the capital, Montevideo, is at the heart of these initiatives. It’s known as a green, walkable city with a thriving vegan quarter. Its airport, Carrasco, was the first in the region to generate its own energy from clean sources.

Vancouver has been on the forefront of environmental activism for decades. In 2012, the Greenest City Action Plan set 10 goals to achieve by 2020. These included increasing green jobs, reducing greenhouse gas emissions, and expanding green buildings.

Additionally, Vancouver has committed to getting 100% of its energy from renewable sources by 2050. Currently, it has the lowest greenhouse gas emissions per person of any major North American city.

A city for nature-lovers, more than 125,000 trees have been planted since 2010.  A great walking city, over 50% of journeys in the city centre happen on foot, bike or public transport.

The city voted to ban single-use plastics in 2019 and its five-star hotels, such as the Fairmont Waterfront, grow vegetables and house bees on their roofs.

San Francisco is a serious tech-hub and home to some of the most innovative companies in the world. Airbnb, Uber, or Twitter, anyone?

Tech innovations to improve energy efficiency in buildings and public transportation make San Francisco a leader in clean energy. More than half of all MUNI buses and light rails are zero-emission.

As California has battled serious droughts, San Franciscans have reduced their water consumption to around 49 gallons of water per day. The national average is 80-100 gallons per day.

San Francisco was the first city in the US to ban plastic bags, and plastic straws and utensils have been outlawed since July 2019. The city sends less trash to landfill than any other city in the US. According to the US Environmental Protection Agency, 80% of its waste is recycled, composted or reused. Businesses are charged according to the volume of waste they present. Plus they are penalised if recyclables or compostables end up in the trash.

You’ll also find a plethora of plant-based restaurants in SF. Want to work off those vegan treats? Don’t let those hilly streets deter you. San Francisco is the second most walkable city in the US.

With five million people, Singapore is often recognised as one of the most forward-thinking green cities in Asia. Its Sustainable Development Blueprint targets include improving energy efficiency by 35% and having 80% of households be within a 10-minute walk to a train station.

Drastic changes in transportation aid sustainability with measures such as limiting car ownership. By 2030 80% of the city’s architecture will be eco-friendly. Plants line the top, sides and interiors of buildings (like cascading gardens). A garden city, the number of new trees increased from 158,600 in 1974 to 1.4 million by 2014. Gardens at the Bay boast 50m tall high tech “super trees” . They offer a light show (powered by solar energy) and are embedded with 150,000 real plants.

The zero-waste trend is also gathering pace. Stores such as Ugly Food and UnPackt are changing the way Singaporeans stock up on kitchen essentials. The Fashion Pulpit takes sustainable fashion to a whole new level with its membership-based clothes swapping system. From Korean and Peranakan to Japanese and Italian, vegans have a vast array of restaurants to choose from.