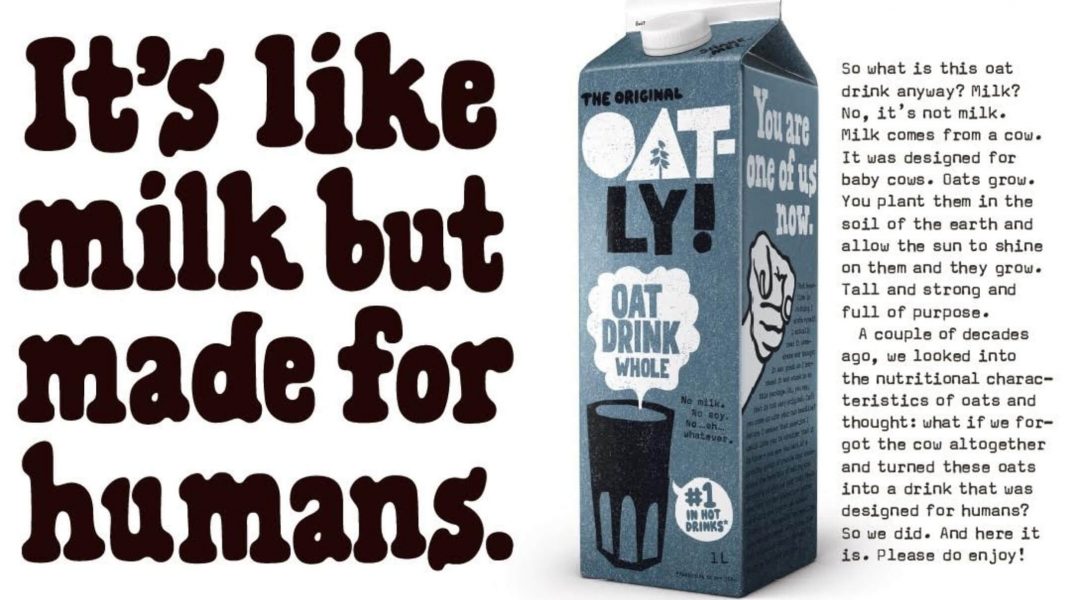 Oat milk giant Oatly’s humorous flip of the script has succeeded in flipping angry consumers out.

A series of short films entitled ‘Help Dad’ is the latest campaign from Swedish oat milk brand Oatly. In these, the traditional scenario of an adult talking to a teenager about difficult issues is reversed. For instance, a dad comes shuffling into the kitchen under the cover of darkness and fumbles at the fridge. A light snaps on – and there sits his son, shaking his head in disapproval, as his dad guiltily holds a bottle of cow’s milk.

It’s a scene that has been played out time and again throughout history. The teenager sneaks home late, only to find a parent waiting up for them. A young person raids the home bar and is caught red-handed. An adolescent searches their pockets for their phone — and watches in horror as a condom falls onto the floor by their parents’ feet.

Except this time, the roles are switched.

A barrage of complaints

According to the Advertising Standards Agency (ASA), 143 people made complaints about the campaign. The issues raised were various. For example, sexism. Ageism. Causing fear and distress. Affecting people’s mental health. Irresponsibly targeting vulnerable teenagers. Additionally? Being offensive to dairy farmers.

Hmm. Perhaps the next time we see an advertisement for a dairy product, we should call it in as being offensive to cows?

Perhaps there are some grounds for the sexism argument. In one of the short films, it’s the mother of the family who’s making tea for the dad. She offers him milk, which he gloomily refuses after being on the receiving end of a Medusa-like glare from his daughter. Fair enough; if Oatly wanted to go all the way reversing the traditional roles, they could have cast a man as the tea-maker.

Even so — fear and distress? Mental health? Really?

According to Michael Lee, creative director of Oatly, “we’re in the midst of a climate emergency, but there’s a group in society who aren’t grasping the urgency of it. (This) is our way of helping teens help their dad or mum or uncle … to adopt a more plant-based lifestyle.”

Some critics, however, have said that campaign errs on the side of shame, rather than assistance. And, in one case, this is not from the mouth (or keyboard) of your average climate denier. This is a journalist who is not only a former vegan, but also a former editor of a vegan magazine.

“‘Help’ isn’t quite the word,” wrote Flic Everett in the Telegraph. “’Shame’ is more accurate. And as any psychologist will tell you, shaming only drives secrets deeper, causes painful division and destroys trust.”

From The Mouths of Babes

Look, very few of us like it when someone else tells us what to do. Isn’t that the primary cause of conflict between students and teachers, parents and children?

Yet it can’t be denied that, when it comes to the climate change emergency, young people are leading the way. And no, it’s not just the Greta effect. It’s the potential for collective action that social media, with which young people are savvy, can harness. Additionally, it’s the awareness that they’re going to be around to deal with the mistakes of previous generations far longer than any Boomers or Gen Xers will be. Most of all, it’s the fact that they are witnessing, first hand, problems that previous generations only guessed at.

Adults have told young people what to do for centuries. Is it really so improbable — indeed, so ‘offensive’ — that adults should listen to what young people have to say? These young people whom Flic Everett has labelled, in her opinion piece, ‘holier-than-thou’ and ‘finger-wagging adolescents’? Moreover, if ever a subject was worth a finger-wag, surely a global emergency makes the cut slightly more legitimately than a missed curfew, or late-term paper?

A History of Controversy

It’s not the first time that Oatly — which saw its UK turnover grow by 89 percent from 2017 to 2018 — has rattled establishmentarian cages. In 2015, the brand’s blatant suggestion that humans are not supposed to drink cows’ milk raised eyebrows. The tagline? “It’s like milk, but for humans.” In the brand’s home country Sweden, the dairy industry took Oatly to court. Their argument was that the campaign falsely implied that cow’s milk was unfit for human consumption. Oatly lost but brought the campaign to London in 2018, nevertheless. The reason, according to Lee, was that “it’s still the truth.”

2019 saw the brand given the side-eye again, when it targeted the London Coffee Festival with its ‘Ditch Milk’ campaign. With a £250k spend, a variety of murals, posters, banners and billboards appeared in Shoreditch, where the Festival was held. Additionally, ads appeared in commuter publications such as The London Evening Standard, Time Out, and Foodsim.

The hook was “Swap to Oat Drink and Save 73% in CO2 emissions.” And if that didn’t provide incentive enough, Oatly handed out cups of coffee from its nearby pop-up. As well as this, the brand encouraged customers to pledge to go dairy-free for 3 whole days in return for exclusive merchandise.

In Oatly’s native Sweden, some complaints referred to a subtext that would be lost on consumers elsewhere. As ‘offensive’ to dairy farmers as ‘Ditch Milk’ may be, its original iteration was “Spola mjölken.” In fact, this is a direct echo of a campaign from the 1970s — “Spola kröken” — ditch the booze. It was a campaign that aimed to tackle excessive alcohol consumption and its ruinous effects. In parodying the errant teen scenario, is Oatly reviving these emotive references?

Well, yes. Perhaps it is. Is this okay?

A Changing Landscape of Acceptability

There was a time, not all that long ago, when women could not vote. When people of colour had no social, nor political rights. When marital rape was legal; when homosexuality was criminal; when slathering oneself in oil to acquire the perfect tan was sound advice.

Similarly, many people saw drinking as a legitimate opportunity to blow off steam. A harmless and individualistic pastime. It took some time before anyone recognised the effects of excessive alcohol consumption on families and, in a wider sense, communities.

Maybe, just maybe, it is taking us a while to see the effects of dairy consumption on the planet.