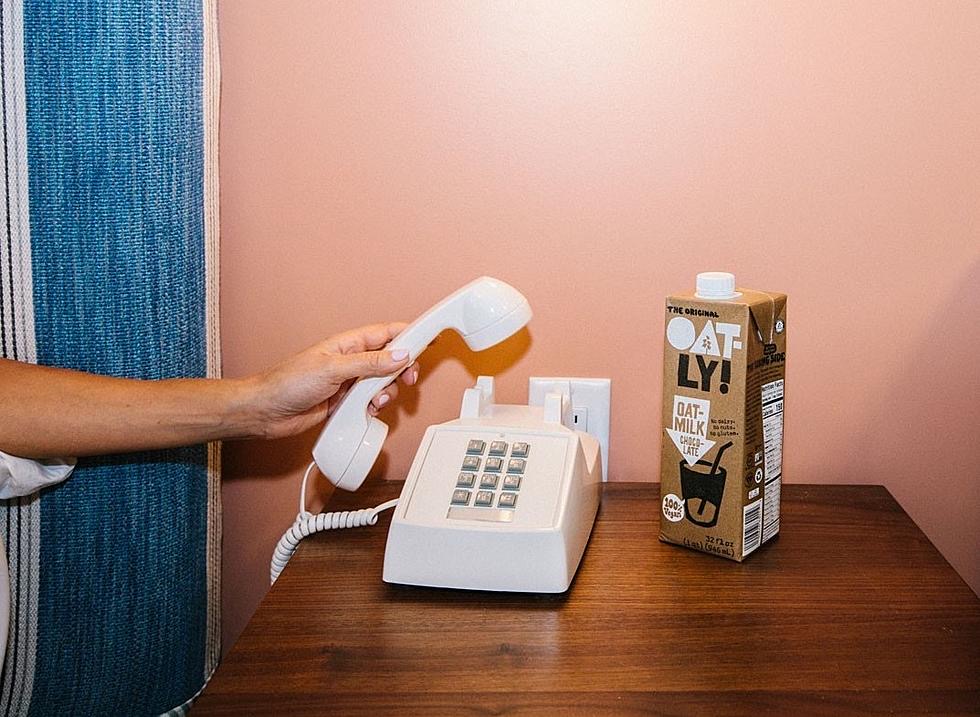 The company, with a rumored $10 billion valuation, filed paperwork to IPO today.

The company says it plans to raise $100 million from a sale of its American depositary shares, “a placeholder figure companies often use to calculate filing fees and is often changed,” WSJ noted. “It didn’t disclose how many ADS it intends to offer to the public, according to registration documents filed with the Securities and Exchange Commission on Monday.”

The Evolution of Milk

It turns out milk is a lot like telephones.

In 1999, most people on the planet didn’t have an email address, let alone a mobile phone. Fewer than 300 million cell phones were sold on the entire planet that year. By 2009, that number jumped to more than a billion. A decade later, in 2019, more than 80 percent of adults had gone completely wireless with telecommunications, ditching their landlines for cell phones. By then, 20 percent of the planet had shifted from basic cell phones to smartphones. That number is expected to nearly double by the end of this year.

For dairy drinkers, there’s a parallel here. Because, while the year now may resemble the 2009 mobile phone equivalent for vegan milk, this is indeed the beginning of the end for dairy. Oatly’s IPO all but secures that. By 2031 we’ll see that same saturation level with vegan dairy that cell phones saw in their second major decade on the market. By 2041, dairy will indeed be so obsolete that when children are told “milk used to come from cows” they will no doubt imagine a line of cows wearing hairnets in an oat or almond factory, standing upright on their hind legs and stirring giant vats of creamy dairy-free milk.

Cows are the landline in this metaphor, of course. And Oatly is that irresistible smartphone that does it all. They say smartphones hold more technology today than the computers that helped astronauts get to the moon in 1969. Milk’s plant-based upgrade over the last two decades is similar, with nuts, seeds, beans — and oats — making it sleeker, faster, and better in nearly every regard.

The Swedish oat milk brand founded by brothers Rickard and Björn Öste ticks those same boxes that saw us transition from the clunky wired landlines to those calculator-looking Nokias and Blackberrys to the now-pervasive black box iPhones and Androids. Like smartphones, Oatly proves to be rather addictive, too; the mere mention of the product perks up ears and whets the palate. It’s a great-tasting, versatile product that comes with clever packaging, brilliant advertising, and most significantly: it does everything dairy does, but better.

Dairy-free milk isn’t new. It’s as old as dairy milk, with storied uses across the continents dating back millennia. We traded much of those practices in though for centuries of milk from cows. We were told there was no better or more healthful drink than milk. We equated its pureness and wholesomeness with mothers’ milk, which, of course, it is. Only problem there is: we’re not calves.

Even though many of the hippies of the 1960s and ’70s ditched meat for their health and the planet, they gorged on milk and cheese for decades. The myth long perpetuated that “milk doesn’t kill the animal” failed to truly see the egregious nature of dairy production: the repeated, forced insemination, the confinement, the male calves turned to veal. Dairy may not immediately take the life of the cow being milked, but it all-too-often took the life of her newborn son.

We can forgive much of our collective confusion — or denial – and chalk it up to ignorance. Just like before smartphones was a time of de facto Luddism, the meat and dairy industries forced us into silent complicity; they’ve been incredibly successful at stealthily concealing industry practices that would be illegal if done to our household pets.

You can credit Ingrid Newkirk and PETA’s aggressive marketing campaigns, most notably, “Dairy Is Scary,” over the decades for sounding the alarm on dairy. When animal rights activists succeeded at sneaking into concentrated animal feeding operations (CAFOs) and snapping photos or videos of the abuse and neglect, local news channels and newspapers were all-too-quick to decline coverage for fear of backlash. One need only revisit Oprah publicly denouncing beef on her talk show in 1996 after “Mad Cowboy” Howard Lyman explained to her the truth about mad cow disease to understand media hesitation.

Oprah figures in Oatly’s story, too. While she may have eaten burgers since the outburst that saw her embroiled in a legal battle with the Texas Cattleman’s Beef Association for years, she’s also seen the writing on the wall about the food system — at least when it comes to dairy. She was an early investor in Oatly, alongside Natalie Portman and former Starbucks chief Howard Schultz. JAY-Z’s Roc Nation is among the latest round of investors.

What’s So Great About Oat Milk?

Nutritionally, oat milk isn’t a superstar. A one-cup serving contains about half the protein of cow or soy milk. And unlike cow and soy, it doesn’t contain all nine essential amino acids. (Protein and amino acids can all be found in a well-balanced plant-based diet, though.)

It’s about the same in terms of calories as cow’s milk, double that of soy or unsweetened almond milk. And while oats are an excellent source of fiber, you won’t find any in your Starbucks latte. Most of that is filtered out.

But what you do find in oat milk, what has made it the Beyond Meat of milk, is its flavor. Or, rather, its near-complete lack of it. Oat milk tastes great because it doesn’t taste like much. You can’t say the same for almond or coconut or soy milk. Oat is an easy stand-in for dairy because its harder to distinguish.

It’s the milk’s frothability, though, that has made it a real superstar. It is to coffee what Beyond Meat is to any burger bun; it has converted the dairy drinkers and the flexitarians, and yes, the coffee snobs, too.

The brand’s unapologetic ads have made it a buzz-worthy brand. It’s the Nike “Just Do It” of dairy. The cool factor is baked into its marketing propaganda from carton to billboard. There are viral ads: “It’s like milk but made for humans,” or the clever workaround on its dairy-free ice cream — “we can’t call this ice cream, but you still can.” Even the weird Super Bowl LV commercial where CEO Toni Petersson sang a song in a field of oats hasn’t deterred fans of the drink.

Oatly doesn’t just make for good laughs and lattes, though. Like other dairy-free milk options, it’s free from the saturated fats in dairy. It’s also free from the antibiotics and growth hormones in dairy.

Oats, like almonds, or soybeans, or coconuts, are better for the planet than dairy, too. It takes more than 600 gallons of water to produce a single gallon of milk, according to PETA. Alfalfa, grown for animal feed, requires 1.6 trillion gallons of water a year. Cows are big greenhouse gas producers. Specifically, they produce methane, which is 25 to 100 times more damaging to the atmosphere than CO2. Hitting Paris Agreement targets is nearly impossible if we continue to consume animal products. Experts like Sir David Attenborough have been sounding this alarm for years.

The End of Dairy

While Oatly’s IPO may be ushering in the new era of milk, dairy’s decline has been decades in the making. According to the USDA, since 1970, per capita fluid milk consumption has fallen from 0.96 cup-equivalents to about 0.61 cup-equivalents per day.

Between 1978 and 2008, the number of preadolescent children who did not regularly consume milk doubled from 12 to 24 percent. Those who had once consumed milk three or more times per day dropped from 31 to 18 percent.

The opposite is true for nondairy milk. Sales have boomed over the last decade — that same jump we made with smartphones between 1999 and 2009. Between 2012 and 2017, sales of vegan milk in the U.S. grew 61 percent, according to Mintel. While just a few years ago, access to dairy-free milk was limited to Whole Foods Markets, health food stores, and a few progressive supermarkets, it’s now expected that every supermarket, convenience store, and coffee shop has ample supply of dairy-free beverages.

Now, as consumers have more options than ever, with more than a dozen vegan Ben & Jerry’s ice cream flavors, vegan cheese at major pizza chains, and a bevy of nondairy options at coffee shops, dairy is fading into obscurity. Will we look at Holstein cows the same way we look at rotary phones — quaint but useless relics? There seems no other option. While family farms may certainly choose to raise and milk cows, the industry is in a downward spiral. Even organic dairy — once the darling of the natural foods world — can’t overcome the waning interest in cow milk.

Now, Oatly is busy setting up the successes for its IPO. It’s not the first dairy-free or vegan brand to IPO. But it’s the most exciting one since 2019 saw Beyond Meat go public. In its latest partnership, Oatly teamed up with cult-favorite coffee chain Intelligentsia on the chain’s first ready-to-drink latte range. But its bigger success lies with Starbucks. Slow to embrace oat milk, the coffee chain finally came on board with Oatly in an announcement last year. After a successful trial, Starbucks pledged to begin serving the oat milk across the U.S. this year. Oatly also righted its supply chain issues in the U.S., onboarding more production and distribution after such scarcity that cases of its beloved barista blends were selling for upwards of $100. It has succeeded in transitioning from luxury to necessity, like our ubiquitous iPhones. It’s unusual to go a day now in any major city without seeing some glimmer of Oatly — a billboard, a carton, a menu offering. Few vegan brands have achieved this level of recognition. Beyond the recent stars Beyond Meat and Impossible Foods, only the oft-mocked Tofurky roast has enjoyed such fame.

Perhaps Oatly hitting the proverbial nail in the coffin to dairy is little more than happenstance. After all, it could be almond or soy or coconut had they come along now instead of oat milk. But like oat’s better-known form as a warm and hardy bowl of breakfast comfort, oat milk is a soft, reassuring and familiar friend here to help us out of our complicated history with dairy. Just like a toddler shifting from mother’s milk to solid food, or cutting that cord after a life of landlines, it takes baby steps to wean. But once the weaning is done, there’s no looking back. And for milk, it’s clear that the future is dairy-free.