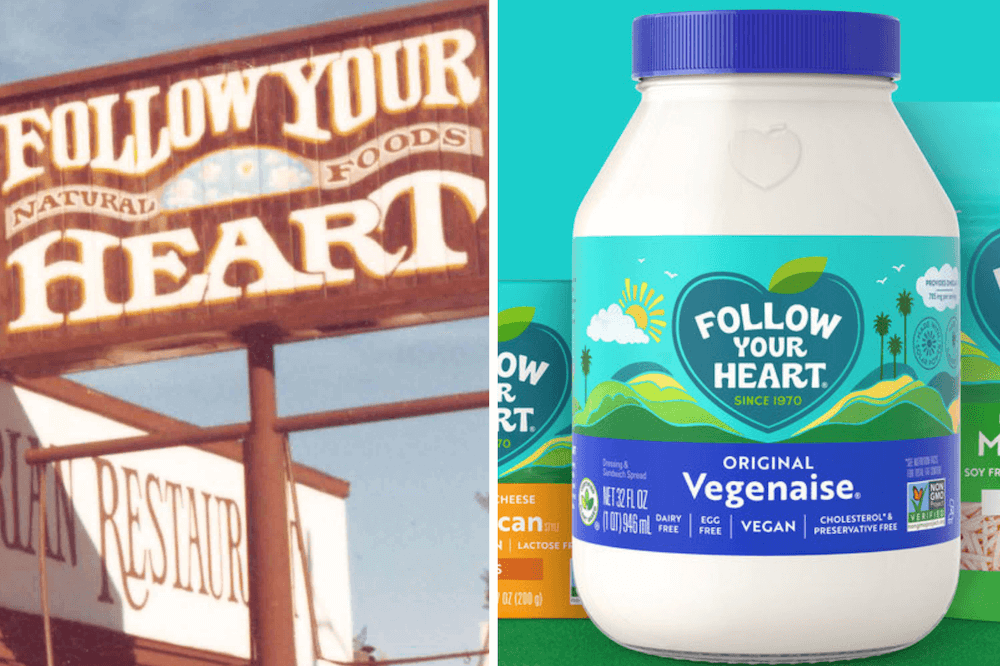 Was your favorite vegan food brand a byproduct of Earth Day?

In 1970, 20 million Americans amassed to call for greater environmental awareness. Frustrated by the hopeless Vietnam War, ferocious oil spills, and rising air pollution, a junior senator from Wisconsin corralled an emerging public consciousness into what we now celebrate every year as Earth Day.

Many of those who took part in 1970 were hippies seeking a new, more natural way of life. Experimenting with hallucinogenics and a lack of washing, they may have rejected The Man, but they still needed to eat. Eschewing the capitalist cult of frozen peas and Mr. Skippy, these hippie communes gave birth to a culinary counter-culture of organic produce and vegan fare that has found its way onto today’s shop and supermarket shelves.

Recently purchased by dairy product powerhouse Danone, it’s hard to believe that this pioneering brand – the leading producer of vegan cheese in the US – started as a seven-seat soup, salad, and sandwich counter in Southern California. Inspired by the Earth Day movement, the Follow Your Heart founders – Michael, Bob, Paul, and Spencer – wanted to lead the way in innovating great-tasting and healthy foods while striving to make the world a more compassionate and delicious place. As co-founder Paul Lewin explains on the website, “Our mission is to spread the ‘Follow Your Heart’ message throughout the world. The more we put the message out there, the better the world will be.”

Nowadays, Follow Your Heart has an internationally available plethora of plant-based products.

As well as the award-winning Vegenaise – the original and #1 vegan mayo – products include vegan cheeses, fresh salad dressings, and new breakfast staples like dairy-free yogurts, and VeganEgg.

At the forefront of sustainable technology, the company’s Earth Island production facility has a department dedicated to initiatives such as waste elimination, alternate energy, responsible packaging, and community involvement. The first plant-based manufacturing facility in the US to achieve Platinum Level Zero Waste, since 2016, over 98% of waste and has been diverted from landfills through recycling, composting, reduction, or reuse.

Self-confessed naturalist and hippie Seth Tibbott was making tempeh on the Tennessee-based commune known as The Farm. He later took his obsession to Oregon and starts a vegetarian food company, operating from a 300-square-foot treehouse. By 1995, Tofurky makes its first appearance on a Thanksgiving table and struck a chord with the many Americans wanting a meat-free Thanksgiving. Now, 40 years later, Tofurky has an expanded range to include Chick’n, deli slices, burgers, sausages and dogs, grounds, roasts, and of course, tempeh.

Still family-owned and B Corporation certified, Seth’s stepson is now CEO and leading the hippie start-up into the next millennium of animal-friendly food.

Seth penned a page-turning memoir about his journey, too: 2020’s “In Search of the Wild Tofurky.”

This brand was born back in the day – 1977 to be precise – in Boulder, Colorado. At the time, soy was still considered pretty far out. But Silk founder started experimenting with the Asian legume and came up with a revolutionary dairy milk alternative. Now mainstream, Silk has expanded from soy to nut-based milk as wells creamers and yogurt. Part of the WhiteWave group, that has recently been purchased by dairy giant Danone, Silk is sticking to its hippie guns when it comes to sustainability, from water conservation to supporting bees.

Founded in an old, converted carwash, Lightlife launched its first tempeh product in 1979.

By the early ’90s, the brand was selling Smart Dogs®, now the best-selling plant-based hot dog in the United States. In 1999, the company promised that all products would be GMO-free, which it achieved by 2017.

“We believe the future of protein is cleaner, tastier, and nutritionally superior,” explains brand president, Dan Curtin in a press release. “The Lightlife Burger is vegan certified, non-GMO certified, soy free, gluten free and kosher. We have sold more than 100 million servings of Lightlife products over the last 12 months, which tells me we are moving our brand in the right direction.”

Last year, Lightlife achieved 100% carbon neutrality. But it doesn’t stop there. The plant-based protein producer intends to halve its environmental footprint by 2025.

Tofutti came about in the ’70s when caterer David Mintz decided to make non-dairy ice cream out of tofu for his Orthodox Jewish customers who didn’t eat dairy and meat products together.

A vegetarianism and animal advocate, Linda McCartney — who passed away from breast cancer in 1998 — launched her own vegetarian food range in the ’70s. This was when vegetarianism wasn’t the mainstream movement it is today. Whilst often the object of ridicule, the photographer’s products have paved the way for meat-free eating.

Now, the brand’s range includes vegan Pulled Pork, Hoisin Duck, and Chicken Roast. The Beatles singer Paul McCartney said of his late wife, “Years ago, before anyone had woken up to the idea of environmental and health and animal welfare issues, Linda was blazing the trail with vegetarianism, telling people about it and promoting it.”