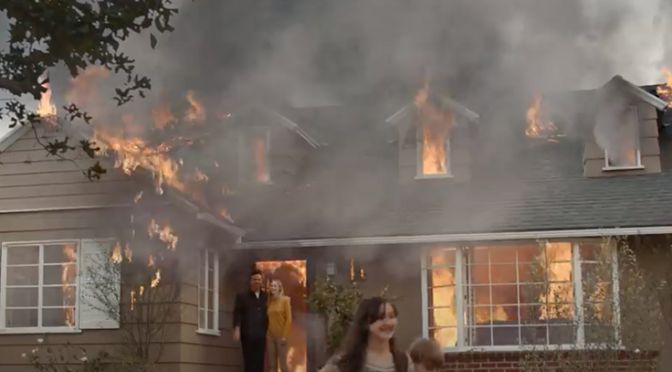 Our House Is on Fire

Fridays for Future latest film demonstrates how ridiculous denial can be

The alarm clock goes off as 5:59 flips over to 6:00, the embers just starting to catch on the carpet and end of the duvet, turning into small flames.

The morning routine continues – get the kids up and brushing their teeth, make breakfast, prep lunch boxes, talk about working late – as the fire grows and smoke starts to fill the rooms.

As the kids leave for school, the parents smiling and waving goodbye from the front door, the house is nearly engulfed in flames. Then the parents turn and enter the house, shutting the door behind them.

‘Our house is on fire. React.’

This thought-provoking video is one of the latest from Fridays for Future, the international climate action movement inspired by Greta Thunberg’s school strikes for the climate.

Joe Hobbs, the US organiser for Fridays for Future, told Muse:

‘We believe it’s time people realise that climate isn’t going to happen, but that it’s already happening. We hope that by watching this video, people will realise they need to take action now, instead of putting it off until later.’

A collaboration between creative agencies FF Los Angeles and Ways & Means, the film was released as part of the 50th anniversary of Earth Day at the end of April. There was so much amazing content on the day, we’re still catching up!

‘Pandemics and climate change are similar and share many of the same attributes. We need to fight both crises with the same strength. The long-term consequences of climate change will certainly be even more dramatic than coronavirus.

We are all facing climate change, and all nations need to take action to make it stop. The spot demonstrates just how ridiculous it is to stay in denial. Our goal is to reinforce the actions of the people who believe in climate change, but also to start a discussion for those who still don’t believe it.’

Are you ready to react?

Show your support by joining the Fridays for Future #ClimateStrikeOnline