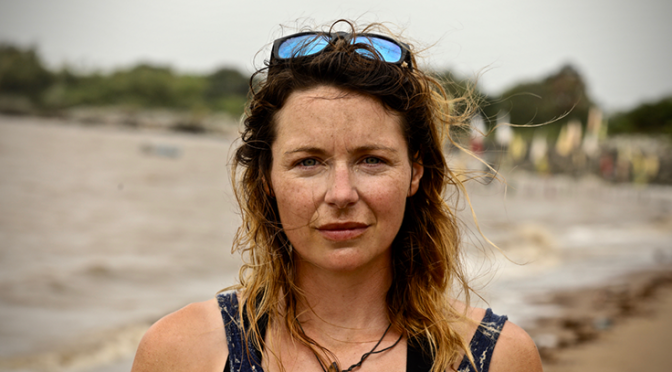 Having a newborn right as coronavirus hit the UK has been surreal. On one hand, they’re enjoying the time and space to bond with their daughter, but they’re also missing the engagement with family and friends.

On a source-to-sea kayak journey on the River Essequibo in South America, Pip almost sat on a deadly snake, saved by one of her guides. Unable to leave mid-trip and head home, she relied on the mantra ‘You can’t change the problem, but you can change your reaction to it’ to give her strength. A few other mantras that are helping her during the crisis are ‘You can do. You are doing this.’ and ‘Nothing lasts forever.’

A year and a half ago, they left London for a house by the sea and a sense of community. And that’s only flourished during lockdown with the clap for carers and flowers on the doorstep and a community bulletin board sharing stories and experiences.

Being part of the Easy-Jet generation that is used to flying anywhere for the weekend was already starting to feel uncomfortable and guilt-ridden. Slow travel allows you to go beyond the tourist destinations, hear real stories from local people and it’s cheap!

Are travel writers getting in the way of the story? The best people to tell the story of a place are the ones in situ.

Make a list of everything you miss and everything you don’t miss as a result of lockdown. It’s a useful exercise to do so you know how to emerge without ‘normal’ life crashing back on top of you.

Pip is an adventurer, travel writer and film-maker with a passion for meditation, health and wellbeing. A self-proclaimed hippy at heart, Pip is a firm believer that the great outdoors and connecting with people is good for the soul. As well as being an intrepid traveler, she is also a trained meditation instructor.

Pip studied history and politics at Oxford University and subsequently worked in Asia for five years as an anchor and reporter in Hong Kong. She also traveled extensively in Malaysia as a key reporter on the general election and produced political and travel multimedia stories for The Telegraph, BBC, CNN, and South China Morning Post, amongst others.

Pip’s journey back to Britain in 2013, to take up the role of Adventure Editor for Red Bull Online, was an epic year-long 10,000 mile biking trek, starting in Kuala Lumpur, taking in 26 countries. Despite narrowly avoiding being blown up by mortars on the Afghanistan-Tajikistan border, Pip is still a huge fan of adventure on two wheels.

In 2016 Pip embarked on a 3000 mile cycle, boat and terrifyingly small plane journey exploring Brazil to Peru, raising awareness of the environmental issues in the region. From the mouth of the Amazon River in the Atlantic, finishing in Lima at the Pacific, Pip documented the deforestation of the Amazon and its devastating effect on local indigenous communities. Transamazonica, a six-part documentary series about the journey, is currently being distributed globally by Boulder Creek International.

Most recently, Pip’s passion for exploration took her on an epic expedition, kayaking the entire length of the Essequibo River in Guyana, as part of an all female team, which took two months to complete. Starting their journey in the interior of Guyana at the true source of the river, the team paddled for 1,014km until they reached the Atlantic Ocean. Their journey saw them traverse the Acarai Mountains, Wai Wai land, untouched virgin rainforest, unexpected rapids and contentious gold mining areas until finally arriving at their ultimate destination on the coast, and achieving a world first.

With her vast experience in news anchoring and TV presenting, Pip is a confident and proficient public speaker, with many stories to share about her adventures. Her public speaking appearances include a national tour with the RGS and RSGS, as well as events with TEDx, The Adventure Travel Show, Proctor & Gamble (Beijing), A Night of Adventure, Campfire festival, Cheltenham Wellbeing Festival, Bishop & Miller Autioneers, Wilderness Festival and Sunday Papers Live. Pip’s warmth, inquisitive nature and down to earth attitude have endeared her to a core following of 53.2k across her social media platforms.

In 2018, Pip joined the Royal Marines on an expedition across remote northern Norway and also became a Craghoppers Ambassador, whilst her infectious energy and enthusiasm for adventure resulted in branded content campaigns with the Japan National Tourist Organisation, Tourism Ireland, BMW, Sweaty Betty and most recently Burt’s Bees. Pip has also recently began work with Southend Borough Council on a schools project to highlight ways in which children can help towards climate change reduction.

This year she plans to write a book about her epic Essequibo challenge.