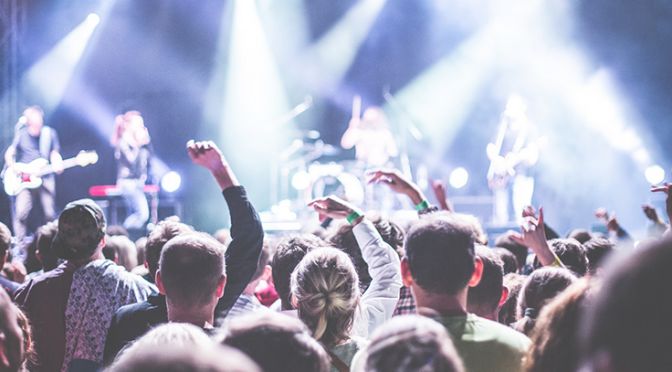 Culture & Celebrity
26th May 2019 By: The Planet Shine
SHARE

We are slap bang in the middle of festival season; the welly wearing revellers are out in force, ready to party, dance and sing their way through summer.

However, there’s a dark cloud lurking. According to a 2015 report, from the think tank Powerful Thinking, the 279 summer music festivals in the UK are responsible for a staggering 100,000 metric tons of greenhouse-gas emissions every year (including audience travel) and they also produce 23,500 tonnes of waste, only a third of which is recycled.

As the world’s biggest bands are racking up the airmiles and their carbon footprints, and audiences are travelling the length and breadth of every country in bid to see their idols, there’s something a little different in the air on this year’s festival circuit. The mighty Glastonbury Festival decided to take a stand and ban plastic, a fairly monumental move considering that an estimated 1.3 million plastic bottles are sold at the festival each year.

But is it enough? The music industry’s last study into its environmental impact was way back in 2010 and rather shockingly, it showed that the industry is responsible for a staggering 540,000 tonnes of greenhouse gas emissions each year.

The issue begins with live music performance which is responsible for 75% of the music industry’s impact. 65% of pollution from live performance is a direct result of the audience travelling to rural locations in bid to experience the magic. The location of a festival has a huge effect on environmental impact not only because of traffic but because of tents being left behind, single use plastics, water wastage and the use of diesel generators.

Last year, global artist management and events agency Live Nation – home to U2 and Jay Z amongst others on their 500 strong roster – announced that it would be banning plastic straws from all 45 of its American concert venues. A number of leading festivals followed suit including Coachella and Montreal’s Osheaga, and sixty-one UK festivals banned the sale of glitter.

Not to be outdone, REVERB.org, a non-profit that works with some of North America’s biggest music tours to make them more environmentally friendly, launched a partnership with the United Nations Environment Programme for a concerted anti-plastic campaign.

So far, they have succeeded in a 120,000-ton reduction in carbon emissions, also making headway with its #RockNRefill campaign to ban the use of single-use plastic bottles backstage among artists and crew. Their work continues to support the UN’s #CleanSeas pledge, focusing on giving up plastic straws, trading plastic bags for tote bags, and choosing reusable water bottles, mugs, and takeout containers. This summer, Reverb will be working with some of the world’s top pop acts, including Pink and Fleetwood Mac.

But what of the artists?

When it comes to touring, carbon offsetting has taken off; the San Fran-based rock band Third Eye Blind is countering the effects of a 35-city tour this year, including a portion of audience travel, by buying certified carbon offsets from US based ClimeCo, which also offset 3,500 tons of carbon dioxide from Pearl Jam’s 2018 tour.

Making a more personal stand isJack Johnson and his EnviroRider agreement, which has been in place since 2005, and which demands that the venues where he performs follow stringent waste reduction, recycling, and carbon offsetting guidelines.

What a brilliant way to instigate change!

Finally, the decline of CDs and the rise of music streaming services has resulted in a reduction in carbon footprint, however, merchandise has taken over. The shipping of small quantities has a negative impact as well as the sometimes unethical supply chains of materials. Perhaps ‘Wear Your Old Band T-Shirt to Work Day’, with an emphasis on the ‘old’ is the way forward!

For now, though,  if you want to support the trailblazers and activists within the music industry, make sure you stop using single use plastic, take public transport wherever possible – or at the very least carshare, opt for vegan food, don’t buy any merch and take your pick from one of the following festivals.

Splendour in the Grass, Australia
Customers are given the option to buy a Carbon Offset ticket for just $3 extra. The money raised from which is invested in Australian renewable energy projects.

Glastonbury Festival, UK
The ultimate British festival experience and, as mentioned earlier, they banned the sale of single use plastic for the first time ever!

Paléo Festival, Switzerland
Paléo Festival encourages all attendees to use public transport and thanks to partnerships with local transport organisations, a special service allows everyone to travel home safely after the festival.

Coachella Valley Music and Arts Festival, US
Definitely the one to go to in the States. Coachella’s eco-initiatives are gaining international attention; in association with nonprofit organisation Global Inheritance, the festival offers attendees the chance to win VIP tickets if they carpool with four or more people.

We Love Green, France
One of the leaders in environmentally conscious festivals,  a key aim is to raise awareness of environmental issues and influence public behaviour in an artistic and experiential way.

Fuji Rock Festival, Japan
Fuji Rock aims to find peace and harmony through the relationship between music and nature. Through the Fuji Rock Forest Project, the festival runs a number of schemes that focus on the maintenance and protection of the area around the festival site.