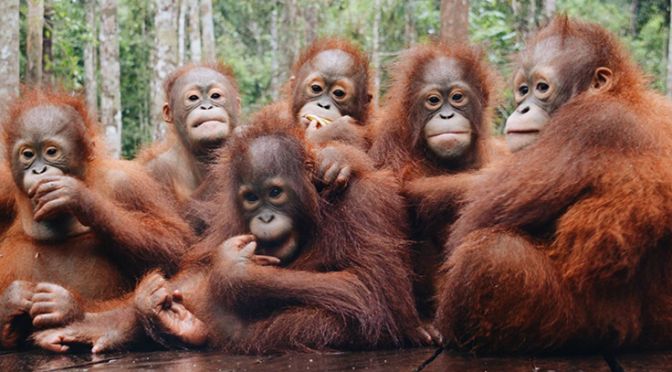 In the early 2000s, Patrick Rouxel travelled throughout Indonesia and witnessed the scale of environmental destruction in Sumatra and Kalimantan.

‘It was very overwhelming and depressing to witness this,’ Patrick told Al Jazeera in an interview in 2012. ‘It still is today.’

Not knowing how to process what he was seeing – the deforestation, the mistreatments of animals, the corporate greed, the mindless consumerism – Patrick turned to his craft of filmmaking as a way to share what he was feeling with others around the world.

The award-winning film that he made was Green: Death of the Forests, an exploration of the impact of deforestation and the exploitation of natural resources from the point of view of a dying orangutan. The 48 minute film uses only visuals, no spoken words or subtitles – a deliberate choice, he explained.

‘The story of the film can be understood by everyone without the help of narration, so why have any? Secondly the story is “told” from the point of view of an orangutan, and orangutans don’t speak human languages, they have their own silent language which I wanted to respect. Thirdly, and more technically, having decided to have the film available for free download on the internet, the absence of any written text, dialogues or narration means that I only needed one version for all world viewers.

‘I also think that the absence of words helps the audience to feel the emotions I try to get across. It is a way for the film to appeal directly to the heart without passing by the intellect.

‘As consumers we are fuelling the destruction of the Indonesian rainforest. We are therefore all accountable for the extinction of the Indonesian tigers, rhinos, elephants, bears, orangutans and many more. Their habitat is being wiped out, they have nowhere to go, they are killed or captured, sold, and end up in private homes or local zoos. They are suffering badly.

‘Being a captive animal in Indonesia is pure hell because the notion of animal wellbeing does not exist there. And every day, through the things we buy, we encourage this destruction and suffering.

‘Green is a mixture of poetry and activism. It doesn’t judge or accuse, nor does it give lessons or morals. It just shows what is going on in Indonesia and how consumers around the world are connected to this.

‘Through the story of a dying mother orangutan, the film calls on emotions, empathy and one’s ability to feel sorrow and pain as well as shame and guilt perhaps.

‘The film is meant to be an eye-opener for those who didn’t know. It is meant to trigger a reaction in the audience, to instigate change.’

Today is International Orangutan Day – a day set aside to raise awareness of the plight of these magnificent apes and inspire action to protect what’s left of a critically endangered species that we share 97% of our DNA with.

Conservationists believe that we’ve lost 97% of the world’s orangutans since 1903, primarily due to the destruction and degradation of the tropical rain forests. In fact, there are only two islands left where orangutans live – Borneo and Sumatra.

The orangutans habitats are being destroyed by humans – hunting, illegal logging, clearing forests for palm oil plantations, mining, road construction – as well as by the climate crisis – changes in the El Nino weather phenomena are sparking large-scale fires.

Hope for the orangutans

But all is not lost, as Maria Voigt, Erik Meijaard and Serge Wich – a trio of academics and researchers – noted in an article in The Conversation in 2018.

‘People working on the ground know that the orangutan can be saved. It requires persistence, good collaboration with governments, strong support from local people, and help from companies that manage the land. Once forests are maintained and protected, and killing is stopped, orangutan populations can be stabilised. It might even allow them to slowly bounce back and recolonise forest areas where orangutans have disappeared in the past.

‘We need to think outside of the box. For instance, a lot of effort and funding goes towards rescuing individual orangutans, who are then moved to a safer place where they can be rehabilitated. But while this may help individuals in desperate situations, it is a very expensive and ineffective way to deal with the overall conservation problem. To put things into perspective, we lost more than 100,000 orangutans in the past 16 years and saved perhaps 1,000 through rescues, translocations and rehabilitation in the same period.

‘If we really want to stop the decline, we must both protect forests and stop the killing within them. As most orangutans live outside protected areas, we need to get the communities and companies who manage their habitats on board. Here, there are many possibilities. For example, one oil palm plantation is now protecting 150 orangutans within its concession, showing that oil palm is not inevitably linked to the complete destruction of primate habitat.

‘On a larger scale, the Malaysian state of Sabah and the Indonesian province of Central Kalimantan, both in Borneo, intend to certify their entire production of palm oil as sustainable by the year 2025, which includes a zero-killing policy. At the same time, both countries are developing new long-term action plans for orangutan conservation.’

So what can you do to protect the orangutan?

Change how and what you buy

Filmmaker Patrick Rouxel said: ‘I hope viewers will think twice before buying anything and ask themselves “do I really need this? How was it made? Where do the raw materials that make up this product come from?…We must change our consumer habits. We must considerably reduce our consumption of palm oil, paper and exotic hardwood. If we don’t, Indonesia will chop down all its forest to the very last tree.’

While the academics make the point that rescuing individuals is expensive and doesn’t solve the scale of the problem, it’s still worth saving the lives of those individuals! Here are a few charities doing good work for orangutans:

For just 50 cents a day, you can adopt an orangutan through Orangutan Outreach, covering the cost of care for an orangutan until they can be safely released back into the wild, or if they can’t be released, to cover the cost of their care in a sanctuary.