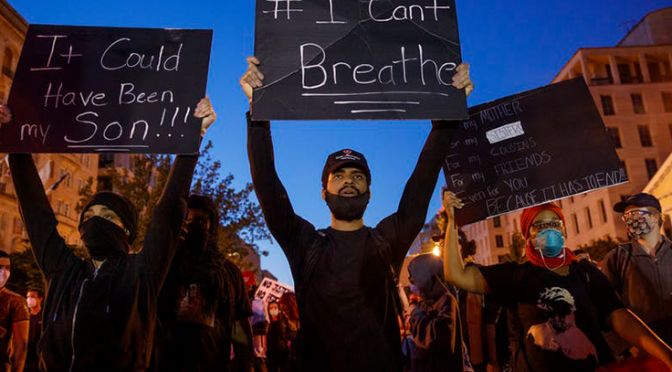 George Floyd: why the sight of these brave, exhausted protesters gives me hope

In a way, you could say we’ve been holding our breath this whole time, until now.

What you’re witnessing is Black America exhaling and breathing fire all over the country. We calculate, in horror, the awful symmetry of the killings of Eric Garner in 2014 in Staten Island and George Floyd in Minneapolis in 2020. They couldn’t breathe because America is a choking hazard. I don’t think I exaggerate.

At the time of writing, there are more than 100,000 people dead from COVID-19 in the US. Black and Brown Americans are disproportionately sickened and have died from a novel coronavirus that exploits America’s breathtaking racial inequalities in health, housing and employment.

Protesters shouldn’t be gathering in groups as they risk infection and spreading the virus further. But protesters are assembling, at great personal risk to themselves and their loved ones, because George Floyd couldn’t breathe. They inhale, exhale and raise hell in memory of him.

In cities across America and Europe you see how George Floyd is spontaneously put in conversation with other Black victims of state violence. With Atatiana Jefferson in Texas, Breonna Taylor in Kentucky, Ahmaud Arbery in Georgia, Adama Traoré in France, Sarah Reed in England and Oury Jalloh in Germany.

These souls have died at the hands of the police (Jefferson and Taylor), under suspicious circumstances in custody (Traoré, Reed and Jalloh) or have been shot to death by private citizens who were, until very recently, confident they would not have to answer for their crime (Arbery).

This is a gathering of the ghosts of our past, present and future. They assemble to watch us and wonder when and how this will end.

We scream, we shout and we march because we are haunted by those we could not save and by the terrifying knowledge that these violent deaths at the hands of the state – or those who know they have the full support of the state – could happen to any of us.

They couldn’t breathe because existing while Black is a threat to the everyday order of things – to the mundane organisation of American society that demands Black people’s subjugation.

Folks are tired of this injustice. They are exhausted. Yet, even in this state of individual and collective exhaustion, protesters take to the streets. Exhaustion, it seems, is a praxis: it is a theory and practice for protest and activism. Physical and psychological exhaustion is knowledge – because if you’re tired of the way things are that means you understand that things can be different. Through a haze of exhaustion, you glimpse another world. A world without police and prisons, perhaps.

Counter-intuitively, exhaustion is your imagination hard at work envisioning new futures in which your Blackness is not weaponised against you. Those folks putting their bodies on the line in the streets understand that we have to work through our exhaustion in order for it to come to an end. We must pass through exhaustion to reach repose.

This exhaustion can be used to forge solidarity. Solidarity is a deeply emotional sense of unity: the collective exhaustion of protesters and the wider sympathetic public binds us together through collective agony and action. We are scared, the future is uncertain – all we have is each other. With each other, we can try to build something new.

Lessons from the tear gas

It is, of course, monstrous that exhaustion is demanded from those who simply want to live. It is unconscionable that we must accept extreme fatigue in order to get free.

The simple message of ‘stop killing us’ is greeted by militarised police forces armed to the teeth with flash bang grenades and tear gas. Meanwhile, armed white people who intimidated elected officials in order to resume their conspicuous consumption in the middle of global pandemic were hailed as heroes.

However, this is the stark reality of living under white supremacy. Tear gas, ironically, can be very clarifying. America offers lessons every day about who it values, who belongs and who is human. Follow the tear gas: many answers to your questions about America, past and present, are there. But don’t let this enduring lesson be in vain.

Seeing people stream out onto the streets is probably the most hopeful I’ve been since the start of the pandemic. America is experiencing mass death, incompetent and vengeful leadership and economic collapse. Even under these catastrophic circumstances, people join together to demand more and better for themselves.

The ferocity you see in the streets is driven by the grim understanding that the protesters will return after the next outrage and the one after that because the struggle for Black liberation will not be realised in our lifetimes. But we catch glimpses of the world that might be in the exhalation of breath on the streets.