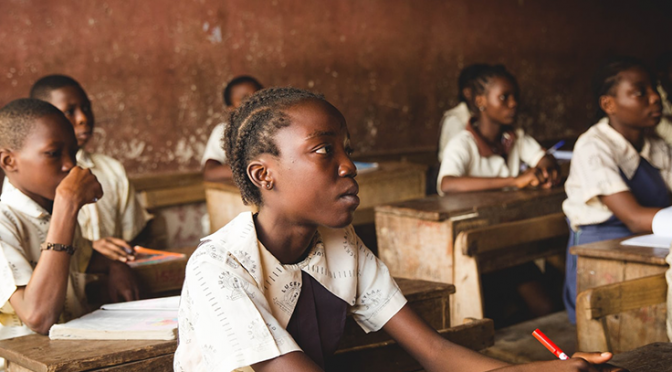 Climate change and violence against women’s rights are interconnected: a call for an ecofeminist approach

The world is witnessing environmental instability leading to violence against women’s rights. Everyone is affected by climate change regardless of where you are from, your sex or your age. However, in terms of proportionality, women are hardest hit.

Climate change comes in many different forms: drought, flooding, the control of resources, conflict and natural disasters. Everyone has a share in environmental instability but women will always have a place at the center of it – directly or indirectly. As environmental instability affects national security so does it affect the security of women.

In various conflict zones, problems arising from environmental crises impact women more than men. Women and girls are sexually abused, forced into marriages against their will, sold as slave or are kidnapped for ransom. Evidence can be drawn in the various hotspot regions in the world – Lake Chad, Syria and Yemen among others.

Women are most vulnerable to climate crises:

By rights, girls are expected to be educated as a form of empowerment to their family and the community at large to enable them to contribute to their national development in building stronger institutions.

But women also have a direct relationship with their environment; it is inbuilt. They source the cooking materials – either near or far – as a home keeper.

Climate change creates environmental violence against women. For example, women and girls who must search for scarce resources may fall victim to rape. And when flooding takes over farmlands and the only source of livelihood to most families in Africa vanishes, girls are given out for marriage or are “recruited” as local hawkers; it’s a survival tactic.

In the world of climate change, poverty is inevitable. But this is a strong weapon against women’s rights. I watched a DW interview in which a 13-year-old girl called Sande who lives in Malawi’s Nsanje District got married at the age of 13 against her will. According to Sande: “I was sent to be married because of a shortage of food in the house”.

Why environment crises is a mirror of sexual violence:

From Lake Chad to Syria down to Yemen, these hotspots have been confirmed to be in the middle of environmental instability. In Africa, climate change leads to the scarcity of natural resources – land and water – which in turn affects the livelihood of those who depend on them, resulting in abject poverty and gradually growing into conflict. That’s how a fight over natural resources can lead finally into war.

If there will be World War III, its cause will be climate change-induced environmental instability. Most importantly, climate change does not create all these crises but creates an enabling environment that makes such occurrences thrive.

The crisis in Syria is now linked to drought, leading people to intraregional-migration to survive. As people move from rural to urban areas, they exact pressure on limited resources, leading to the survival of the fittest and building a fertile land for insurrectionists. The same thing is fast taking place in West Africa.

The shrinking Lake Chad Basin bounds Nigeria, Chad, Niger and Cameroon. For some time I have been campaigning for its restoration because the loss of water is affecting the peace and security of Africa and fueling terrorism. When there is the loss of livelihoods the youth become vulnerable and are pressed to join armed banditry in taking up guns against their own country while women fall victim to the circumstances.

Already, about 10.7 million people are in dire need of human assistance, while 2.7 million livelihoods have been lost. Around 30 million people depend on Lake Chad for various purposes – and it has shrunk by 90%. It was recognized as one of the largest lakes in the world, but is now referred to as one of the world’s humanitarian crisis zones.

The effect of climate change on the lake is more pronounced on the northern side of Nigeria that is faced with desert encroachment and drought, making terrorism and armed banditry thrive.

Climate change is a silent pandemic, but it’s showing signals that action is needed – that is why we must fight it with whatever it takes.

I vividly remember 2014 when some schoolgirls were kidnapped from their school in Chibok in Borno State, Nigeria. This is one of the closest states to the shrinking Lake Chad. After some years, the same incident happened again to Dapchi schoolgirls in Yobe State, Nigeria.

In every environmental crisis, women and girls are always the first victims – forced to marry the terrorists, raped or sold as slaves. They have a lot of stories to tell. For some, it might be a point of no return; a great loss to the community and the entire nation! It is unfortunate that women have no hiding place in the world of conflict. All of these arising crises made me an ecofeminist.

The more women are deprived, abused, coerced into marriage or illegal engagement, the less the country can develop. When women and girls are left behind, it creates a wider gender gap. And the arising climate crisis makes such a gap difficult to close. But by empowering women, you empower nations and when you protect women, you protect generations to come. The inclusiveness of women in environmental activities and rights lessen the effects of the crises they pass through. Ask any country or sector that is economically flourishing – women are also the backbone of it.

In the new normal, post COVID-19, women must play a central role for a greener economy and sustainable future. The participation has to include all sectors; not one can leave women behind. It has been stated by the former Secretary-General of the United Nations Ban Ki-moon that “global goals cannot be achieved without ensuring gender equality and women’s empowerment.” So must one of the goals become a solution multiplier for the other goals to be attained.

Oladosu Adenike is an ecofeminist, freelance journalist that focuses on women in conflict zone, climate change and national security.